Tools of a Trade 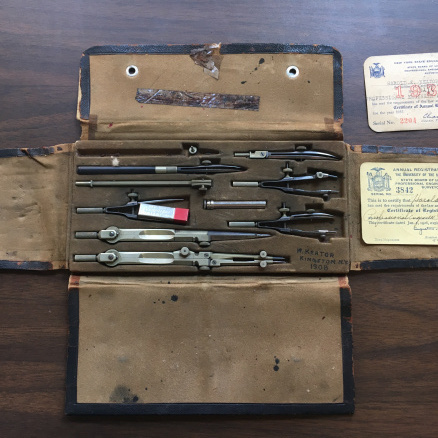 Battered and torn, decrepit and worn, the old brownish case sat among three similar objects on the table of the Research Library at Historic Huguenot Street. The outside of the case has the remains of a sleek leather lining, but due to use and age, the leather is almost entirely gone, revealing the tattered cloth foundation of the case underneath. By loosening the button clasps on the front sections, the case folds open to reveal its contents. When the case lays flat on the table, the tools and certificates resting inside are revealed.The tools held in the case are placed in perfectly shaped indents of the cushion material in the center of the case. On the right flap of the folding case, certificates are displayed to show the qualifications of the craftsman who used this.

Immediately I took an interest in it above the others; there was something about this one. A greater amount of associated information, of course, was notable to me, and certainly played a role in my selection of the object; but there was something else, something I couldn’t ascribe to a single feature—the whole pulled me more than any of its parts. It was just begging to be chosen. Ashley Trainor, one of the Historians at Historic Huguenot Street showed me a variety of object I could work with, but this one stood out. So completely and utterly worn – and not just from age, either; it was clear that this wear was from decades of use.

Slowly and carefully, Ashley assisting me, folded back the flaps of the case, revealing the century old instruments within. There was no rigidity at all; not in the least. The flaps had been opened and closed so many times that they fell along their folds as if they were paper—folded back and forth along a crease so many times that separation seemed imminent. Written in thick black ink on the bottom right of the inner case that holds the tools is a name, “H. Keator,” a place, “Kingston N.Y.,” and a year, “1908.” 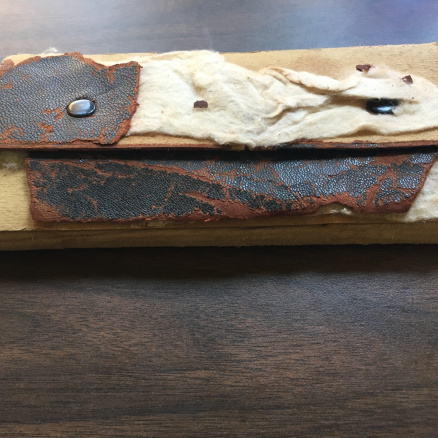 Unfortunately, we have no clear information on the chain of ownership of this object. Historic Huguenot street records do tell us that this object was donated in 2013, but not by who. It is possible that a family member or descendant of the original owner could have donated it. But it is also possible, but unlikely that someone had this in their possession from a friend. Regardless of its journey from Keator to HHS, this object tells a unique story of blue collar work in New Paltz and the Hudson Valley.

But we are ahead of ourselves. What is this thing? —this “tool set,” as I’ve called it.

Before the widespread availability of computer simulation services and computer aided design in general, it was necessary that professional engineers and land surveyors master the process of drafting. This now nearly extinct practice is patently artistic, requiring an array of different tools, all tailored to specific purposes, as well as a high degree of patience, dexterity, and an expansive imagination. This particular set contained ten tools, but one is missing: from the shape of the open indentation, we can tell it was a thin long tool, mimicking a pen or a pair or tweezers. The set has several sizes and varieties of compasses, used to make even circles and other shapes; as well as a few dividers, used primarily to segment lines. In this kit is also a small metal container of Red Top Eversharp pencil leads.

In theory, this drafting set could have been used by anyone looking for clean, exact drawings or schematics; but other aspects of this set tell a different story. Inside the right side flap of the case are two professional license certifying Harold E. Keator as a professional engineer and land surveyor in 1926 and in 1935. These licenses directly connect Harold E. Keator to this tool set, and now we are beginning to understand the story around this object. 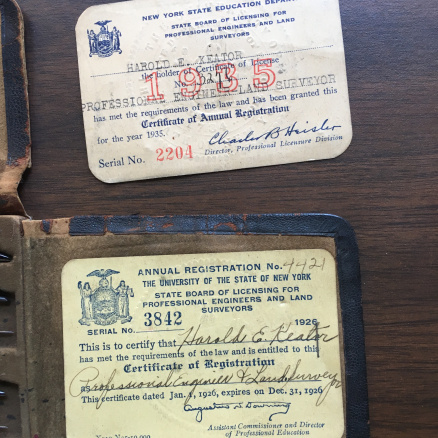 Harold was a professional engineer who retired from New York Central Railroad in 1953 and he died only 7 years later in 1960. The obituary also details the members of his family that he left behind and even mentions a nickname he had: “Knobby” (“Local Death records). Records indicate that Mr. Keator was born around the year 1888 and lived in Kingston, New York. He had a wife, Adelaide, and a son, Harold E. Keator Jr. (United States Census, 1940). An attendance report from the 1912 meeting of the Society of Automobile Engineers at Madison Square Garden lists Keator’s name, followed by “Draftsman, Wyckoff, Church & Partridge, Kingston, N.Y.” (SAE Transactions). Wyckoff, Church & Partridge was a New York City based automobile company that took over the W. A. Wood Automobile Company in Kingston in early 1911 (W. C. & P. Reorganizing without Stearns). Being a resident of Kingston, it is likely that Keator worked at the Wood manufacturing plant, as opposed to at W. C. & P. itself.

The New York Central Railroad was a massive railroad conglomerate, which bought dozens of smaller rail systems and individual railways which they incorporated under the NYCR umbrella. In 1885, one of the rail systems purchased by New York Central was the West Shore Railroad, which controlled the Wallkill Valley Railroad (Encyclopaedia Britannica).This railroad operated from 1866 to 1977. It ran from Kingston, through New Paltz, and down to Montgomery (“Wallkill Valley”). Though currently defunct, much of the railroad was converted to foot trails, the Rail Trail running through New Paltz being one of them.

Recall that the date written on the set is 1908, when Keator was twenty years old. As a young man just starting out, it is possible that the drafting set was gifted to him by family or friends. Perhaps Keator had just gotten a job working at the Wood automobile plant, which we are reasonably certain he was working at only four years later. It is likely that, as a draftsman for an automobile manufacturer, Keator would have used his tools to draft designs of either cars or car components. It is unclear when Keator stopped working at the Wood automobile plant, and began working for New York Central; but we can assume it was just after he received his first certificate as an engineer (as that would have been required for him to work for the railroad).

New York Central was a gigantic corporation, which employed large numbers of employees at a variety of locations; as a resident of Kingston, it is highly probable that Keator, worked on the Wallkill Valley Railroad. If this is the case, then this drafting set may have been used to maintain and improve the Wallkill Valley Railroad. Keator would have been doing so during the 1930’s, 40’s and 50’s, when the railway was bringing vacationers from New York City and elsewhere to and through the New Paltz/Kingston area, many of whom were likely visiting the Mohonk Mountain House.

While we can never truly know Keator, through his drafting set and his certificates we are given a glimpse into his life and the workings of the railroads. These tools create a direct link between the New York Central corporation, and our local trains and now nature trails. Once again we are provided an object that places New Paltz in the center of Hudson valley history and the overall history of New York State.