The Bigger the Better: The Story of a Multi-Purpose Basket 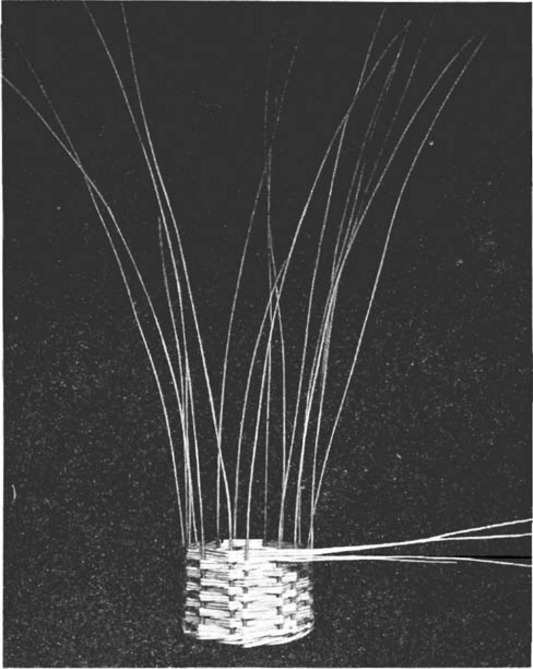 An example of a basket in progress. Okey, 31

A lot of craftsmanship and skill is required for basket making; it is an intensive activity requiring all parts of the body. My particular basket (pictured below) is huge, much wider than the example used by Okey. Its size gives us a glimpse into the time and dedication it took to make a basket this large  Basket weaving has been one of the most common practices throughout human civilization. Think of a world where the plastic Tupperware containers we take for granted are not available, instead, there were baskets. They held everything from food to clothing, to seeds and crops, and were also used to transport goods. This enormous basket could have easily fit a relatively large toddler inside of it. It is rounded, composed of rawhide, reed, and is bound with straw. It is also tightly woven, with two small loops on either side, possibly to string some kind of strap through them.

In Thomas Okey’s An Introduction to the Art of Basket Making, he details the experience one would have weaving a basket, right down to the tools used and the names of each type of strand of material. To form the “butt” of the basket, the basket-maker would first create a cross with pairs of smaller pieces (Slath-rods) and proceeds to weave a longer piece over and under the crossed pieces. To keep it still, the basket-maker takes one of the slath-rods, “brings it tightly over to his right, and lays it alongside the two sticks under his right foot… (Okey, 25)” This process created the bottom of the basket. The basket now resides in the Jean Hasbrouck house, sitting flush against the wall of Joshiah Hasbrouck’s shop as part of the current interpretation of the room. 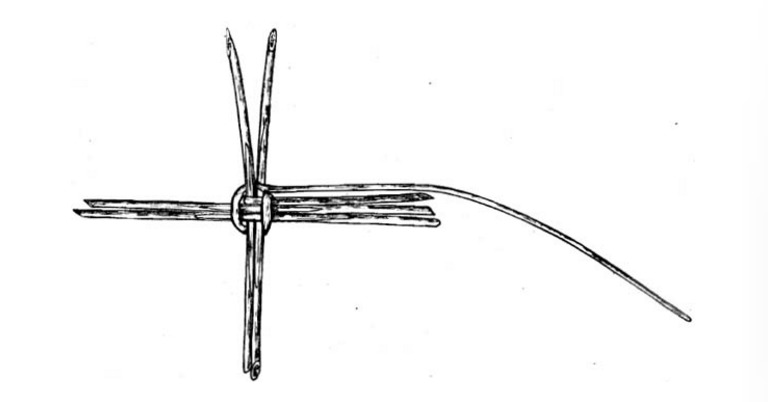 Image from An Introduction to the Art of Basket Making. 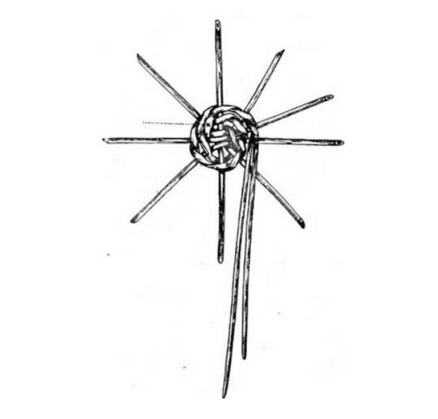 Image from An Introduction to the Art of Basket Making.

Dubois family stories claim this basket arrived in America with Louis Duboise in the 17th century when the Huguenots originally fled religious persecution. In actuality, it is most likely a 19th-century basket. This is a period of 200 years that could separate fact from fiction. From the beginning, I knew I would have to do some myth-busting. After researching general material on Artstor, I’ve found that there are many more results for “19th-century basket” than the term “17th-century basket.” The first search also yields many similar looking artifacts: woven baskets, some of them enormous. Right off the bat, this makes me believe that the family lore is simply lore indeed. But, to add more confusion, the basket was also mislabeled as a clothing basket upon its donation by Evelyn DuBois McLaury. The donation date is prior to 1990, however, there is no exact date.

Still, on my general ArtStor search, I found several sketches of cotton pickers. Pictured were slaves carrying enormous baskets full of cotton. After seeing those images, I immediately thought that this basket was used for farming. Since it is so large in size and so tightly woven it would make sense that it was used for storing freshly picked crops, specifically grain or seed. Since it is so tightly woven, it seems as if the person building it wanted nothing to fall out. 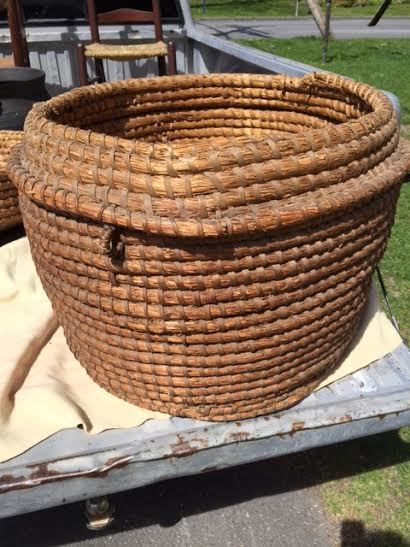 Here it is, the big man. Photo courtesy of Ashley Trainor.

This basket is made of rawhide; assuming the basket was made locally, it most likely would have been made of cow or sheepskin. Josiah Hasbrouck owned a country estate called Locust Lawn, located in present-day Gardiner (“A Notion to Sew”). Crops grown there included rye, oats, corn, wheat, and apples. Hasbrouck also owned: milk cows, chickens, beef cattle, and pigs (“A Notion to Sew”). Photos collected in New Paltz Revisited indicate that a popular crop grown in New Paltz and surrounding areas were potatoes and other spuds (Johnson). The soil was rich in nutrients due to the establishment being along the banks of the Wallkill River. According to “New Paltz Town Records,” once the town of New Paltz was founded, it “survived for the next two hundred years as an ‘isolated, conservative, tightly-knit farming community.’” Additionally, the Huguenots worked on maintaining a healthy and prosperous relationship with the nearby Esopus Native Americans (Esopus Trails).

Baskets are, even today, multi-purpose objects: in our homes, they can carry clothing, toys, donations to the local thrift store, or whatever else we need them to hold. This basket has likely had a similar path through its life--functioning originally, perhaps, as a farm implement, but then later as a hamper or clothing container (as its 1990 donation label indicates). Today it sits in a room on Historic Huguenot Street that suggests yet another historic purpose, a container for shop goods. What is the real story? It’s difficult to know for certain, but in the past, as now, we have many objects that fill more than one purpose in our households.

Special thanks to Ashley Trainor and Carrie Allmendinger for all of their assistance!

“A Notion to Sew.” Hudson River Valley Heritage., 2 May 2008. https://www.hrvh.org/exhibit/notiontosew/