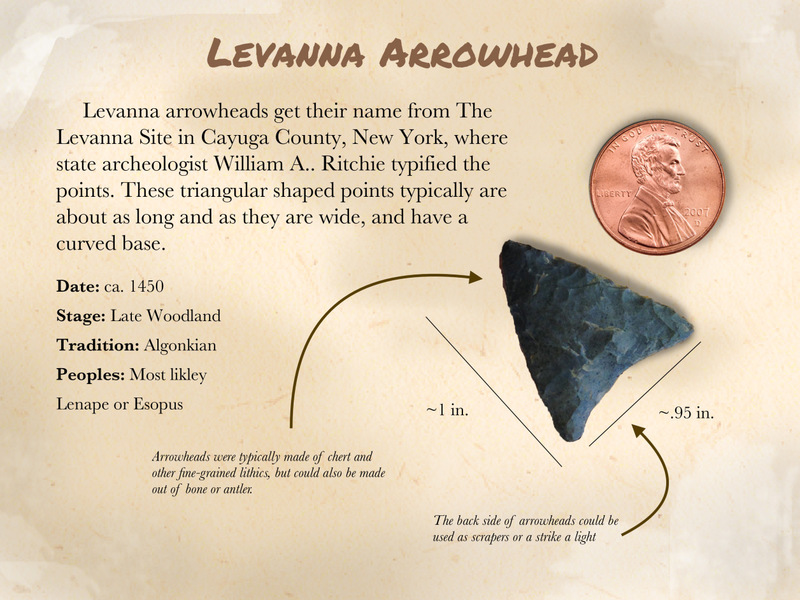 Description The arrowhead below is an excellent example of a Levanna arrowhead, it’s nearly equilateral in shape and has a concave base. It’s very small, as seen compared to the penny. Standard visual classification puts this Levanna arrowhead in the quartzite family; the rock’s small but visible specks classify it as metamorphic (not siltstone) and its dullness is similar to that of other samples (not chert or flint). It’s about an inch both ways and feels good in the hand, and probably better at the tip of an arrow.

Lenape and Esopus hunters of the Late woodland period “probably carried a pouch full of triangular points ready to replace arrowheads broken in use” (Kraft). The arrowheads in this pouch could be used for more than just a projectile. The sharp point could be used for skinning game or dismembering for easier transportation. The back edge of an arrowhead could be used as a scraper, or if made out of flint, to strike a light. If used for either of these purposes, the back edge would become dull and polished or vitrified.

The arrowhead from Huguenot Street has no signs of dulling on it’s back edge. Though time has worn then down, one can feel what remains of the sharp edges, along with indents of the stone that was chipped off with the pressure flaker. There are also no signs of resin or sinew from when, or if, it was tied to a shaft. Then how did it end up on the ground? Say it was once tied to a shaft and was shot in a hunt. What was the hunter after? Or in other words, what’s for dinner?

It would be hard to find out whether the Huguenot Street arrowhead was one of such arrowheads. If anything, knowing humans, it was probably dropped on accident. Once it hit the ground it stayed there as 46 cm of dirt piled on top of it. Above ground the world it once knew was disappearing; its creator ventured to the area less and less as the Huguenots started their street. The fish swam up stream in smaller numbers as industry polluted the river. A college campus becomes larger and larger, naming two dorm buildings after the Lenape and Esopus. One of it’s professors, Joe Diamond, starts excavating on Huguenot Street. On July 12, 2012 the arrowhead is taken out of the ground. It’s cleaned up, numbered, and put in a little plastic baggie. Then in 2015 it was brought into the Honors Center by Professor Diamond, who was kind enough to share it with me.

What do you need to score a meal? In 1450, a Lenape (Munsee) or Esopus hunter would need much more than a fork and knife. They most likely would have used a bow and arrow, crafted by hand, from scratch. Lenape bows were self bows, or a bow made from a single piece of wood with a sinew bow string. Bows were around 57-62 inches in height, almost as tall as a man (Campisi and Hauptman). The accompanying arrows had wood shafts, made out of fine grain wood rods or canes. The wood would be skillfully straightened through a process of soaking, heating, bending and reshaping. Once straight, the shaft was shaved to a uniform diameter, and then sanded and smoothed by being drawn back and forth on a slab of rough or fine grained sandstone (Kraft).

The arrowhead would be made out of local stones, cherts, flints, quartzite and siltstones (LITHICS-Net, “Point Type: Levanna.”). The edges of the arrowhead were made sharp via a pressure flaker, or a sharp piece of bone or wood, that could chip at the edges until made sharp. Arrowheads come in many shapes and sizes. Hunters in and around the area that is now Historic Huguenot Street would most likely be using Levanna or Madison arrowheads. The difference in arrowheads is usually based on shape, with Levanna arrowheads being more equilateral and Madison more isosceles. 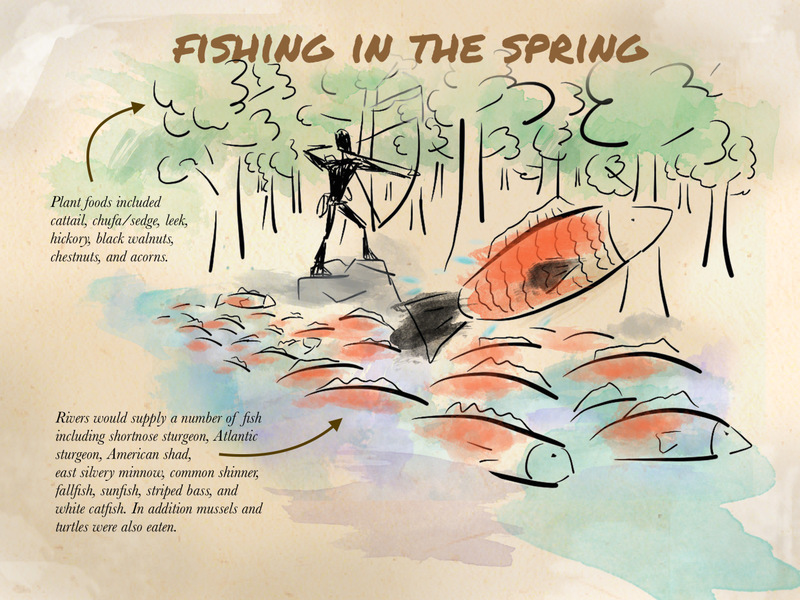 There was a lot of large game in the area for hunting, even bison, but more common were elk, black bear, raccoons, turkeys, geese, turtles, fish and mussels. Bows and arrows were just as much employed for shoot fish as they were in war and hunting (Beauchamp). The largest quantities of protein available were during the spring where what must have astronomical numbers of shad, herring, striped bass, Atlantic salmon, and other fish swam up the Hudson and its tributaries (Funk). Historic Huguenot Street is located very close to the Wallkill river, so maybe this arrow was shot at a fish, the fish swerves, the arrow misses, and it hits a rock. Snap! Off goes the arrowhead. The hunter doesn’t pick it up, he has more arrowheads in his pouch and besides, it’s spring, and he’s busy aiming at what will be the next of many catches today.

Or maybe not. There are no large chips on the arrowhead from collision with another rock. Maybe it hit something softer, something like flesh. It’s fall now, open season. One could pace after an elk or deer until it got exhausted and then club it to death, but who likes running? Hunters spot a herd of elk. They split up, slowly, trying to stay down wind as the surround the herd. Each hunter takes their position, and uproots the grass in front of him. Then he takes a piece of flint (maybe even an arrowhead) and starts a fire, with the uprooted grass preventing it from running back (Kraft). The elk run towards the center of the circle and the hunters follow, soon they are surrounded.

This is one theory behind the practice of burning forests. Burning was also another way of clearing fields for planting. In addition to the diverse protein options there were many plant options available. On an archeological site in Hurley, only 15 miles away from Huguenot Street, Professor Joseph Diamond excavated a number of plant and animal remains from ground pits. Among these were maize, acorns, black walnut, hickory, butternut, chestnut, and raspberries and blackberries. Discarding plant remains in these cleared areas would also make the soil more fertile, and promote these plants to regrow naturally in these areas (Diamond).

Clear land, along with high concentrations of edible plants, makes this land very attractive to deer and elk. It is much easier to hunt if you know where your prey will be. Professor Diamond believed that burning forests served these latter purposes rather than the first, and that hunting was more on a one to one basis. He mentioned the winter, as other sources had, when bears are fat and lethargic and snow is almost up to a deer’s belly. These factors make hunting easier, especially if one is equipped with snow shoes, though none have been found in the area (Kraft). Hunting in the winter would still require the hunter to stay downwind, slowly moving in closer, trying to mimic the quiet of the soft snow. As the elk looks away. Only the faintest rush breaks the silence as the arrow is drawn, the sinew pulled, the shot fired, and the elk falls dead.

Arrows designed for hunting were made specifically so that the arrowhead would not detach from the shaft. This was because arrows were usually recovered when hunting game and could be reused. There were some arrows designed to release the head when pulled out of the flesh. These were the arrows for people. In war, an arrow shot that was not fatal and then removed intact could be reused by one’s enemy. Whereas an arrowhead that was laced with poison, shot into an enemy, and then remained lodged in the body as the shaft was removed, proved to be much more deadly (Kraft). 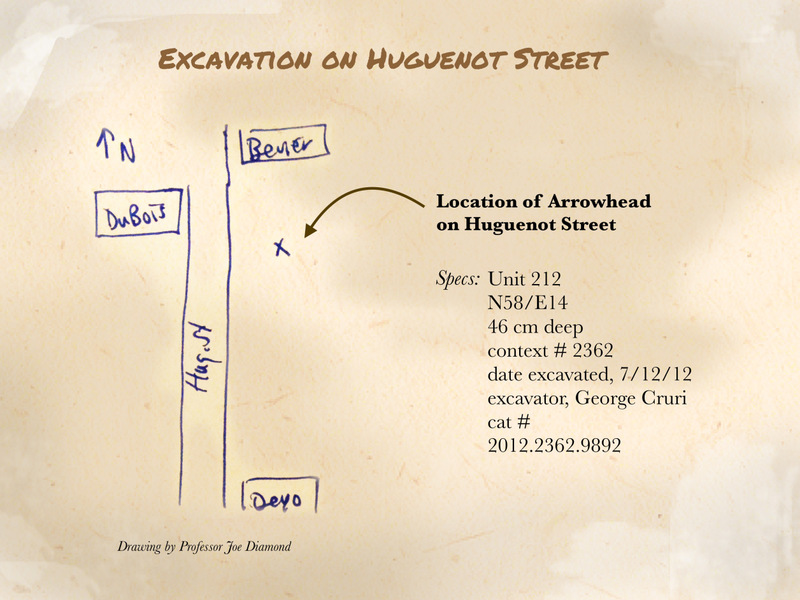 Campisi, J., and L.M Hauptman. Neighbors and Intruders: An Ethnohistorical Exploration of the Indians of Hudson’s River. National Museum of Man, 1978.