Distributed quarterly,  The Normal Review  became the first-ever literary magazine at the New Paltz Normal School in June of 1894. The 26-page publication contained news, poetry, narratives and other forms of writing from students within the school. The magazine folded in 1901 after seven years of journalistic service to the New Paltz community. 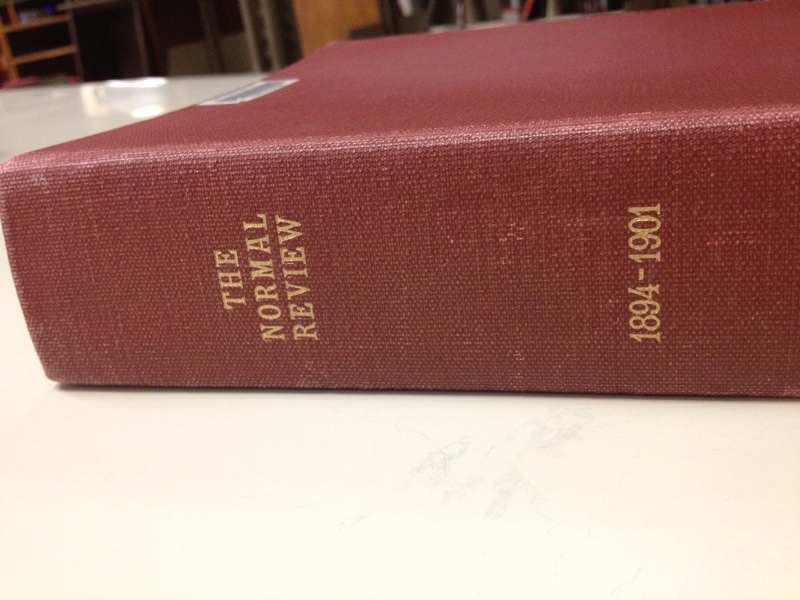 The Normal Review catalog contains a burgundy red hard cover. The 11-by-7 book feels rough to the touch. If you caress the book with your finger, you could feel years of wear displayed as lines on the book. The book also contains gold lettering with the words “The Normal Review” on its binding. Below, in the same gold letters are the active years, “1894-1901.” The bottom of the binding reads, “Alumni Association, INC. State University College. New Paltz, New York." The library placed a barcode on it’s top middle corner. When one opens the book one sees the first issue’s cover page and table of contents. All written work is in a black sans serif font, while advertisements in the back are of different fonts.

The book of literary magazines has been in possession of SUNY New Paltz since its creation. However, the magazines originated in the New Paltz Normal School. After the second fire which burned down the Normal School, the issues were moved to “Old Main,” which is currently part of what is today SUNY New Paltz. The book of magazines was most likely created sometime after the magazine’s final issue. The catalog of the Normal Review issues are available today through the Sojourner Truth Library.

It was their first meeting. The staff of The Normal Review were sitting in a room with piles of papers in front of them. If they were to succeed this would be The New Paltz Normal School’s first-ever literary magazine. Before the first editor-in-chief grabbed the first submission to the magazine, he spoke with his staff and gave them requirements for editing. The magazine’s staff must check for spelling errors, grammar and use their own form of journalistic writing, which compares to what is known today as Associated Press style. After a few words, the editing began. 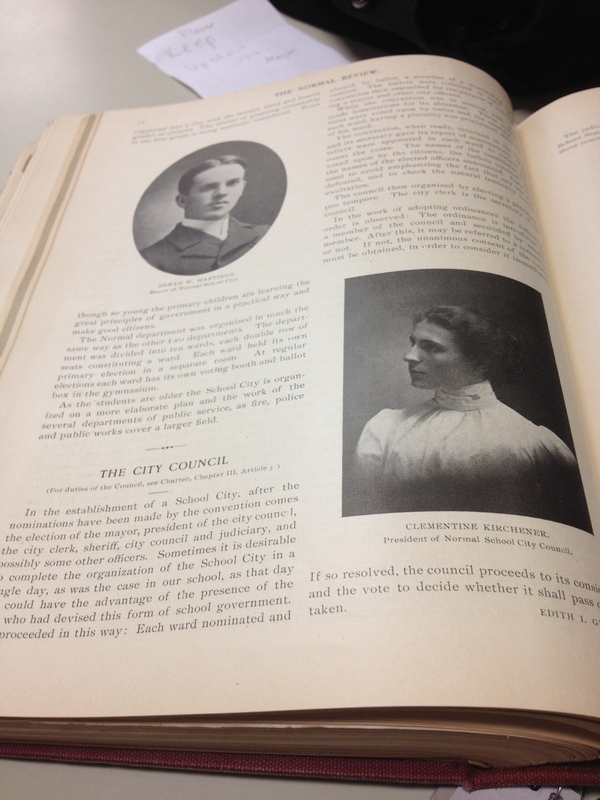 The Normal Review’s first issue became a 26-page issue composed of literary works, narratives, debates, poetry, and news within the community. It sold for just 15 cents. Love was the dominant theme in most narrative writings. Elizabeth LeFevre wrote a piece about a woman on a train heading south. Her lover was sitting nearby. Although she was hoping to never speak with him again, she made herself known and wanted to feel desired. “She felt a twinge of conscience, but one glance through the window dispelled it. They were passing through Ohioville. She must be quick or she would be too late.” LeFevre’s work demonstrates the level of suspense and maturity in writing by these students. Other literary works included poetry by students in terms of love, success, hatred, and sadness. One contributor wrote these lines: “Sitting alone in the twilight, / I dreamed me a dream most fair / Of a never-ending resting / From sorrow and toil and care.”

Written pieces were submitted to the publication by various students and faculty hoping to publish student work. These pieces were most likely written for class and the best results were sent to the Normal Review for final edits and then published. The publication also includes an alumni section, this demonstrates that this literary magazine was popular enough to reach graduates. This may have led to donations. The magazine also made money through selling advertisement spots to local businesses at the end of each publication. Clothing, appliances, and events were mostly advertised for students and their families. 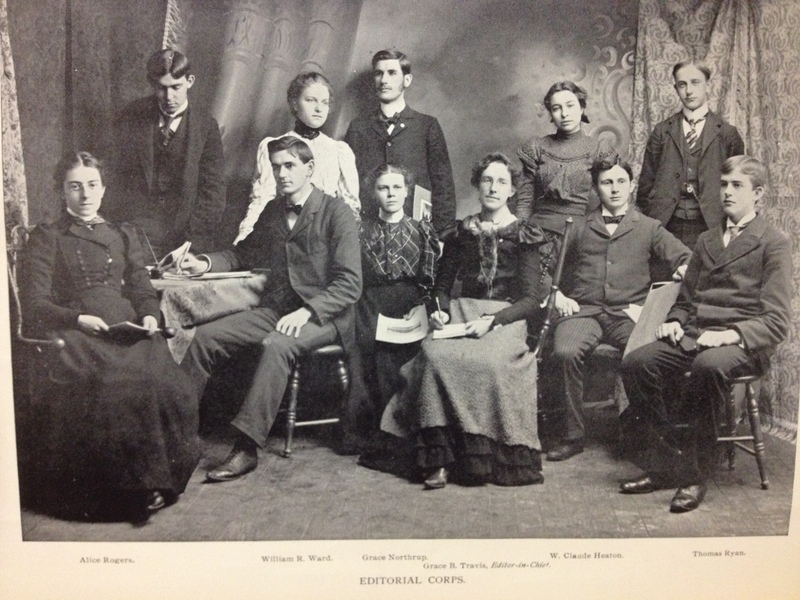 The publication, as a literary magazine, expanded its use as a form of activism. Women, who at the time were not given the right to vote, wrote editorials and news stories on the women’s suffrage movement. One particular issue contained a debate between two students on the editorial staff about women’s right to vote. On the affirmative side, a woman wrote how the right to vote can only benefit society. She wrote:

“In withholding the ballot from women, men do an injustice to their country, for if women were allowed the privilege of voting, their minds would be elevated and broadened, by taking a part of the time which they now spend on a fancy-work and gossip, and devoting it to the study of public questions.” 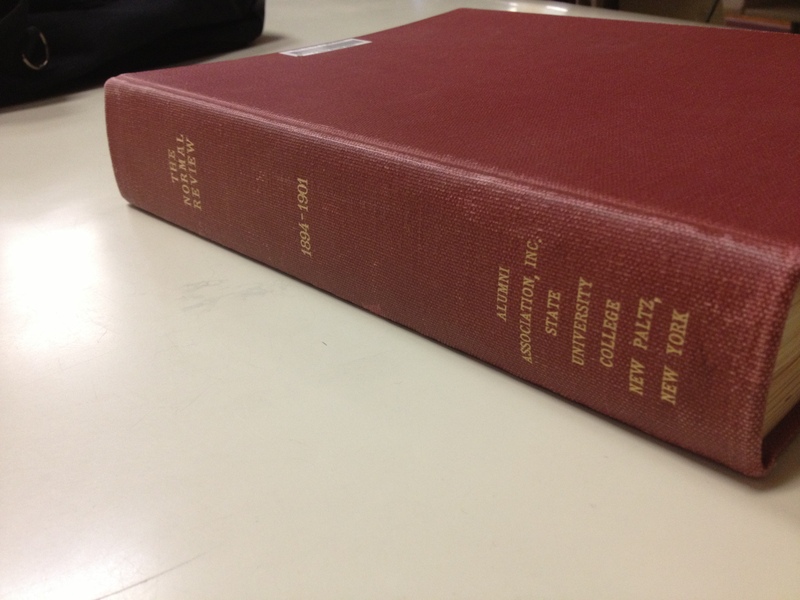 The Normal Review, with strong literary works and public discussions, produced a community of writers hoping to produce a publication to honor student work and spread news throughout town. With a staff of about 12 students each term, the organization published work which was distributed to students, faculty and residents in town. It was meant to be a source of entertainment, news and literary freedom. It was a community of literary progress and discussion.

SUNY New Paltz today also has publications with the same features. The Stonesthrow Review, Shawangunk Review, The Little Rebellion, The New Paltz Oracle, and Avant-Garde Magazine share the mission of bringing our current community some of the same elements. The Normal Review demonstrated a need for publications that bring the community closer together. By being interconnected by literary and journalistic interests, students shared their values, dreams, worries and activism with the community. Journalists and academics today would say that the sharing of ideas and news can only lead to successful societies. It was The Normal Review which created the first stepping stone for publications that are shared today among our faculty, students and community members.

State University of New York at New Paltz. “Past Presidents.” Office of the President. Updated in 2010.