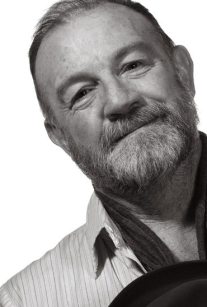 In the Sojourner Truth Library Special Collections sits two objects wholly indicative of SUNY New Paltz's cultural history. Perhaps the most significant objects were donated by one of Europe’s finest actors, directors, and playwrights - Billie Brown. Brown’s cultural and theatrical legacy lives on and has the potential to impact the lives of all SUNY New Paltz students. Two of the objects saved that record Billie Brown’s affiliations with the college are a t-shirt that date back to his directing of The Swan Down Gloves at SUNY in March of 1987 and a working manuscript of his version of Aladdin. 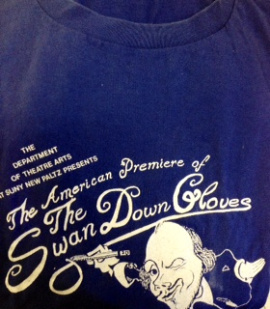 A worn-out, short-sleeved t-shirt dating back to the 1980s represents qualities ranging from pride, participation or simple appreciation for a good performance. This royal blue t-shirt reveals a casual fit to its subject and is made up of cotton fibers. The thin white tag which depicts these details is extremely fragile and shows almost no readable print. The material has a dry feel to it yet the detail in the middle of the tee ironically can be easily read and possesses very little fading. The text states: The Department of Theatre Arts at SUNY New Paltz Presents The American Premiere of The Swan Down Gloves. The character detailed under the writing most likely represents one of the main characters of the show known as Mazda, the Master of Shadows. But why was this production and t-shirt, among the dozens of musicals performed within the Theatre Arts department at New Paltz, cherished and seen as so significant in the eyes of all those involved?

Although no definite information has been confirmed, this t-shirt is believed to have been donated by the original director and writer of the show – Billie Brown – to the SUNY New Paltz memorabilia collection. Surprisingly, as productions played a frequent part in the life of a theatre major, shirts were not always created for each production. However because this was such a special show, the department made an exception so the shirt could serve as a way to remember the achievement of SUNY’s first American Premiere of London’s The Swan Down Gloves. Other items related to this show are also saved within SUNY New Paltz’s special collection, such as the directorial notebook of the show with all the notes, stage directions and cast lines.

According to the New Paltz Oracle, The Swan Down Gloves was produced in March and early April of 1987. The exact show dates were March 26-29 and April 2-5. The performance was held in McKenna Theatre and the general admission ticket was $7. The Oracle had frequent advertisements for college productions and even occasionally had reviews for certain shows for the public to read about. This production is just one of the examples of the rich contributions that the fine and performing arts departments make to the New Paltz campus. However, what makes this production particularly extraordinary is the fact that the theatre department at SUNY was the first group to stage an American version of this London production. Thus, the original director Billie Brown came to SUNY New Paltz to see the show and Nigel Heiss, the show’s original composer, also came to New Paltz to assist with musical numbers.

Based off Billie Brown’s book, The Swan Down Gloves has the potential to captivate the minds of any audience with its imaginative rendering and mystical characteristics. The show debuted in London in 1981 with The Royal Shakespeare Company. The show is a spoof on William Shakespeare’s early life and includes several comedic characteristics that parallel Shakespeare’s plays. The New Paltz Oracle described the performance as: “A frolicking, rolicking romp through the joyous and sometimes bawdy realm of fable and fairy tale where boys play girls and vice versa, rats read Neitzsche and fairies guzzle gin." This “bawdy realm” includes the simple plot of characters Kit (a glove maker) and his brother Will setting out on a journey to deliver a pair of special gloves to the court of London. The characters encounter many obstacles and throughout the show the audience becomes acquainted with vibrant characters such as Mazda, the Master of Shadows, Lumina, The Lady of Light and Lady Alice, the sex kitten. The characters’ experiences throughout the show seem of greater importance than the actual storyline, as a review by John Barber states: “The script…….gives classical actors every chance for outrageous burlesque of panto people and conventions." Clearly, the performance requires tremendous talent and ability which the theatre arts department could take grasp and re-create in the still very familiar McKenna Theatre.

Although little is still documented on the specific casting details and highlights of this show, The Swan Down Gloves was one to remember and appreciate during its current time and still today. This was a new type of performance composed of pantomime and European comedia dell’arte influences, introduced its audience to a different type of show. The performance differed from popular musicals that were more common in American playhouses. It thus paved the way for a different type of audience and a different approach to theatre. SUNY New Paltz was gifted with this wonderful opportunity and so opened its doors to diversity within the theatrical performance world. 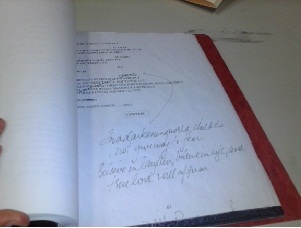 Aladdin, by Bille Brown, can be found in the special collections of the SUNY New Paltz Sojourner Truth Library. It is a “working manuscript,” donated to the collection by Brown himself. Aladdin epitomizes the college’s involvement with the fine and performing arts on not only a local, but also international, level.

The volume residing in the Sojourner Truth Special Collections contains two parts within a sturdy binding folder. The working manuscript of Aladdin is approximately 83 pages. Its content is in the classic play format, with Brown’s handwritten notes in the margins. In addition to these annotations, one also sees Brown’s editing notes for Aladdin, such as certain lines and words being changed or switched or extended. The play, in this manuscript, even includes Pantomime stage directions for the actors, such as “ad lib till AUDIENCE reply sufficiently.” The volume includes the 2004 Old Vic Christmas Issue detailing that year’s Classic Family Panto, which was, of course, Aladdin. In this publication there lies information and articles about the 2004 production of Aladdin at the Old Vic Theatre, containing direct quotes from Brown, Ian McKellan, and even an anecdote as to how Elton John became involved with the score of the production.

The first page of Aladdin says it was written on November 19, 2004. However, this date is scratched out by Brown and written over it are the words: “JANUARY PERFORMANCE DRAFT,” meaning that although the printed text was written in November, the play became a working manuscript and was edited into January of the next year for performance purposes. Brown donated Aladdin to the special collections in the Sojourner Truth Library as a gift.

Aladdin, like Brown's Swan Down Gloves, is not just any play; it is a traditional English pantomime. Pantomimes, usually performed around Christmas time, are defined as “theatrical performances played in the language of action.” Pantomimes usually provide audiences a spin on old fairy tales. With heavy emphasis on audience participation, pantomimes border on the slapstick, valuing heightened bodily expression during the depiction of emotions, events, and dialogs. A line often proclaimed by the audience is the famous “Behind you, behind you!” in relation to some intermittent trouble approaching an actor without them noticing, leaving audiences with the fun obligation of telling the actor themselves.

Another facet of Brown’s editing notes that illustrate a desire to maintain the pantomime ritual is the addition of certain words and actions to increase audience participation, such as changing the line from “Are you having us on?” to “Are they having us on,” in relation to the audience. Soon after this alteration follows the line, “Oh yes they are! (Routine with Audience and DIM).”

Children are welcome at pantomimes as participants and audience members just as much as adults, thanks to the tradition of double-entendres throughout such productions. Shakespearean cross-dressing is also a trait of the pantomime play. Dominant lady-wives are often depicted by older men, and princely male characters are played by youthful women. Brown’s Aladdin followed this tradition with its all-star cast, with Ian McKellan playing Widow Twankey (Aladdin’s mother), and Dim Sum, a male Chinese character, being played by Maureen Lipman. One can see these names written in the margins of the working manuscript of Aladdin, alongside their respective characters. 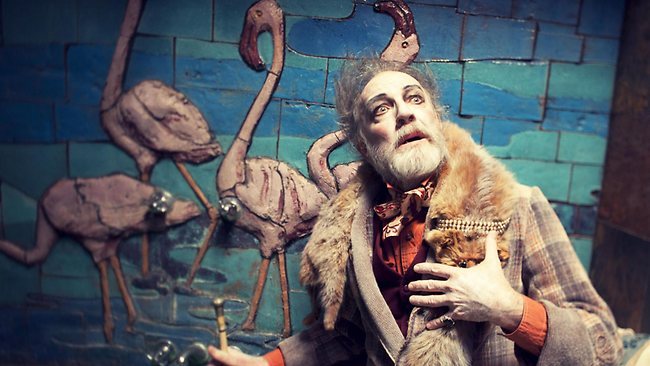 These objects leave traces of a phenomenal person within SUNY New Paltz History. Bille Brown, Australian native, brought not only his talent to the college, but his friendliness, dedication and passion for the theatre arts department and the people of the college. Although Brown came to be affiliated with New Paltz under unusual circumstances, several members of the New Paltz faculty still can recall his vibrant personality. "He had a distinct presence and was very dramatic," says Susan Kraat. "He always had a scarf on, and was just... larger than life," she remembers. Billie Brown became acquainted with the college through a connection with the current Assistant to the Dean of Fine & Performing Arts, David Cavallaro. Cavallaro unexpectedly ran into Brown back when he himself was an undergraduate theatre student at the college. Cavallaro then told his acting instructor that his roommate had someone staying with him that stated he was a member of the Royal Shakespeare Company. Almost immediately, Brown was invited by Cavallaro’s acting instructor to speak to Cavallaro’s acting class. Soon enough, the former College President Alice Chandler granted Brown Artist-in-Residence at New Paltz and Brown became one of SUNY New Paltz’s own.

Without a doubt, Brown’s time at New Paltz in the 1980s proved to be quite fruitful and extraordinarily beneficial to the Theatre Arts Department’s progress as a diverse and unique program. Brown donated his time to the campus and the town by acting and directing a number of productions, such as The Fantasticks and The Philanthropist, and even launched the American Premier of his own work, including the musical Almost a Joke and an RSC pantomime called The Swan Down Gloves. By premiering European-born musicals, Brown introduced the college to a new way of directing and performing as this form of theatre inevitably proved to be quite contrasting from American theatre. Thus, Billie Brown graced the college’s theatre department with an incredibly unique production which positively expanded the department’s popularity and greatly benefited the students and faculty whom could take part in this great experience.  Thus, one can agree that Billie Brown’s foundation within the Theatre Arts Department is unforgettable as not only did he influence the college’s theatre program in the 1980s, but also for years to come as he founded New Paltz’s London Theatre Seminar which can be explored by any student with any major at SUNY New Paltz. Through this program, attendees have the opportunity to explore London Theatre through a two-week abroad program where they visit museums, historic sites, theatres, participate in creative workshops see London performances, all while earning three college credits.

It’s clear that Brown loved New Paltz enough to contribute a working manuscript of one of his pantomimes. That such an accomplished actor would feel comfortable enough to give us an intimate view into his creative process, shows that Brown must have felt that those in the New Paltz community would understand and appreciate his work. At the end of the manuscript, Brown wrote a final note, perhaps intended for the New Paltz community in which he once lived and worked:

In a darkening world, do not give way to fear. Believe in laughter, believe in life, and true love will appear.