13A North Front Street: Beyond the Bakery 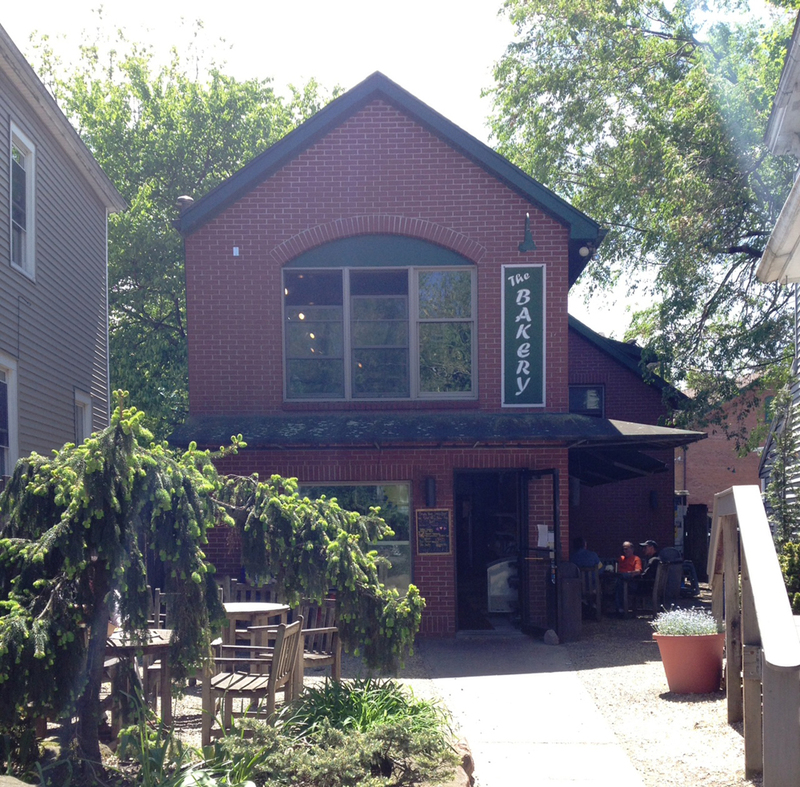 Built in 1883 for Samuel Judkins, this building currently is the home to The Bakery, a restaurant  staple to the New Paltz community. Formerly a Homes and a variety of restuarants, this annex to 13 North Front Street (currently The Bicycle Rack) has since undergone renovations to near double in size.

13 and 13A N Front Street are nestled on a side road just off of mainstreet. As you are entering town, a quick right turn at P&G’s will take you just seconds away from the Bike shop and The Bakery. Originally a house, The Bakery maintains a home-y charm, with soft wood interiors and large windows which allow for plenty of open light. When you walk in, the counter is on your left with display cases of food and pastries ready for tasting. The storefront consists of a display case spanning most of the length of the room, a deli case, a toaster oven, espresso machine, and a counter space. The back wall of the storefront has a door connecting to the kitchen (the original building component) and a large glass-doored refrigerator containing refrigerated drinks. To the right is an outdoor seating area with large trees and flowers, making the area feel well-kept and quiet.   Upstairs there is diner-style seating with booths and simple wooden chairs and tables scattered throughout. There is a small children’s kitchen set and pictures books tucked away in a corner.

The history of the Bakery runs over 100 years back into rich New Paltz History. Like many other local buildings and objects, the names of founding families are strong in 13 and 13A N Front Street. Clippings from the New Paltz Independent from 1886 report the construction of A.D. Relyea’s fourth house between 12 and 14 N Front Street. And by May of the next year, Charles Deyo is reported living in the home. The home changed hands many times before beginning its conversion away from domesticity and into commerce. There was even briefly a pizza shop called, “Nick’s Hide-a-way Restaurant and Pizzeria”. This shop opened in 1955 but does not seem like it stayed for very long. The final owner before the story of The Bakery truly begins is, Virginia Decker, who owned and operated a laundromat called, Ginny Decker’s Center Laundromat. 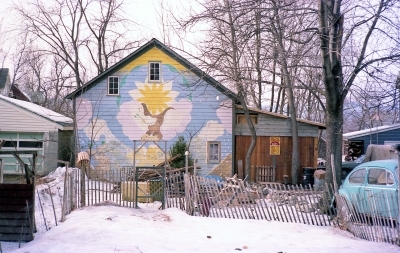 Mural on the side of the New Paltz Food Coop. Designed by Arthur Kusher.

In 1975, Alan Stout bought both 13 and 13A N Front Street. First, he turned 13 into a bicycle shop known as The Bicycle Rack.   At the same time he rented out 13A, then vacant space, to the New Paltz Food Co-op, an organization started on the SUNY New Paltz campus. The Co-op supplied bulk beans and grains that were hard to find at the time (brown rice, for instance) to its customers.). The second floor of the Co-op was used for community classes such as Tai Chi. The Co-op lasted for a few years, but closed around 1979.

In 1981, a former student from SUNY New Paltz and member of the Co-op, David Santner, rented 13A from Stout, turning it into The Bakery. The space was filled to the brim, the kitchen occupying most of the space, while customers would have very little room to stand.

Santner came to New Paltz as a Freshman in 1971 and his passion for food and community would drive the creation of this community staple. For many years, Santner worked at wildflower bakery, but with a change of ownership he left that job behind and longed to create his own bakery. In an interview in 1988 with the Times Herald Record, Santner attributes his business to his star sign which always advised him to become a baker in quizzes and questionnaires. The interview goes on to frame his an ex-hippie turned businessman who cut his hair and shaved his beard in order to get town board approval for his restaurant. His efforts inevitably worked but he explains in the interview: “pretty soon went back to having it long (in a ponytail)” (Ffrench).

Santner said his goal in starting The Bakery was to have a place where people from all parts of the New Paltz social life could visit. So in 1994, Santner and Stout arranged for renovation of the space, adding the 800 square feet for seating and additional customer space. This renovation also coincided with an expansion to the menu from just baked goods to include sandwiches as well. Santner said they were one of the first places to have an espresso machine in New Paltz which made The Bakery known for this hot commodity. Santner demonstrated his dedication to keeping The Bakery family friendly and welcome to all by emphasizing in an article with the Huguenot Herald, that he would keep all of the play areas and spaces for children in, and around the establishment (“The Bakery builds on 800-square-foot addition”). 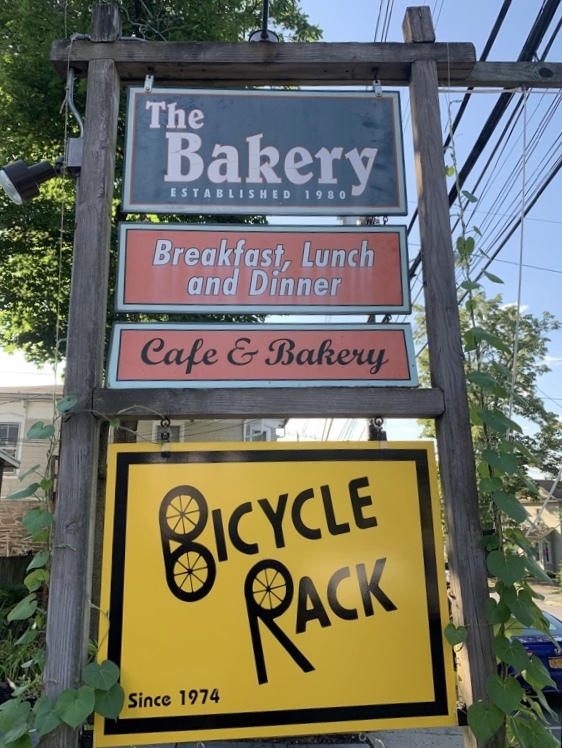 The Bakery set many precedents for the rest of the town in community building, as a family friendly establishment and as the first restaurant to push for outdoor seating. Santner said his ideal restaurant would have been built somewhere next to a park so people could enjoy the outdoor eating experience. However, since this was not what was available to them, Santner and Stout opted for a permit from the Village of New Paltz in 1996, granting them permission to maintain a landscaped outdoor seating area, a novelty at the time. This permit changed the landscape for New Paltz restaurants as more and more restaurants began incorporating outdoor seating as well.

Along with their community based environment and culture, the Bakery also introduced an important tradition to the New Paltz culture when it began hosting The Night of 100 Pumpkins in 1990. Santner said his wife came up with the idea to host a pumpkin carving contest open to the community around Halloween time. The event, which has occurred annually since its inception, features carved pumpkin displays, as well as free hot chocolate, cider, and pumpkin bread. The Bakery’s location on North Front Street, being a one-way, wide street near the end of the traditional Halloween parade route, makes it a convenient place for people to gather and take part in the festivities. It is truly a haven of New Paltz social life.

Clips of articles also referenced (from the Haviland-Heidgerd Historical Collection):

← Ariel Books Clock
In the Kitchen →
Hidden History of New Paltz
13A North Front Street: Beyond the Bakery