A Collection of College Radio T-Shirts 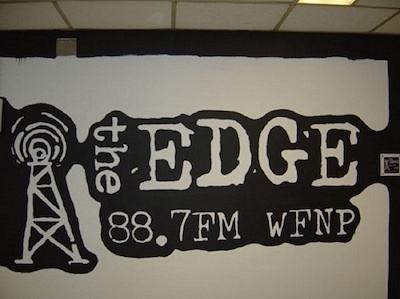 The outside wall of the radio station in the S.U.B.

This collection of T-shirts from the SUNY New Paltz Radio Station demonstrates the development of the radio station across time, providing insight into the history of the New Paltz radio station and how it has influenced the students on campus and the town of New Paltz. 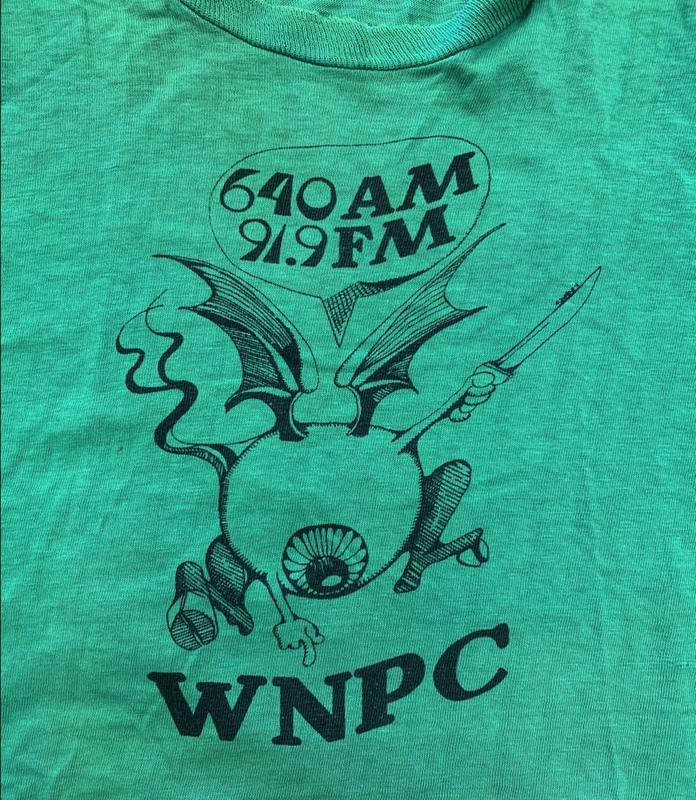 This is a collection of five t-shirts from the New Paltz Radio Station. The earliest T-shirt is a light green, with an image outlined in black of a winged eyeball with hooves for feet holding a sword and pointing downwards to the station’s call letters “WNPC”. There is a speech bubble above the creature with “640 AM, 91.9 FM” within it. This particular T-Shirt is a size large and has been frayed around the edges with persistent wear. It is made of cotton and is soft to the touch.

The second T-shirt is a bit more simplistic. It is a mustard yellow color, with bright red lettering. There is a red outlined rectangle on the center chest area of the shirt, inside the rectangle are the updated call letters “WRNP”, and to the left is an image of a red record. Below the call letters and within the box it says “Radio 64” also in red. This shirt is a size extra-large and has also been heavily worn. It's cotton material has been wrinkled, and is a bit crisp to the touch, as it has been sitting on a shelf for a very long time. 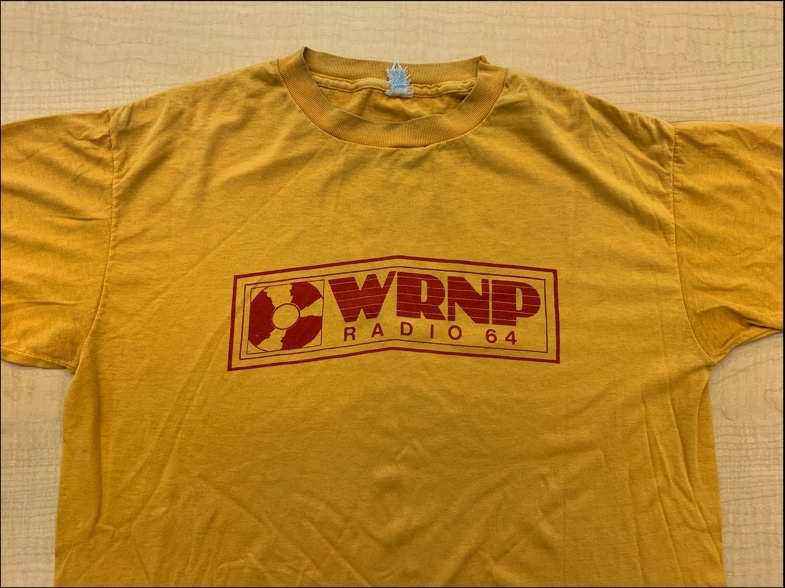 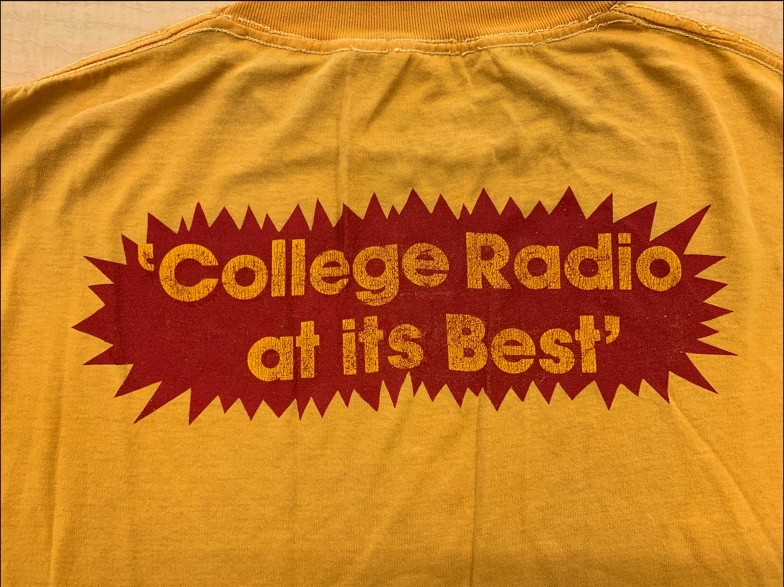 Back of the second T-shirt: "College Radio at its Best" 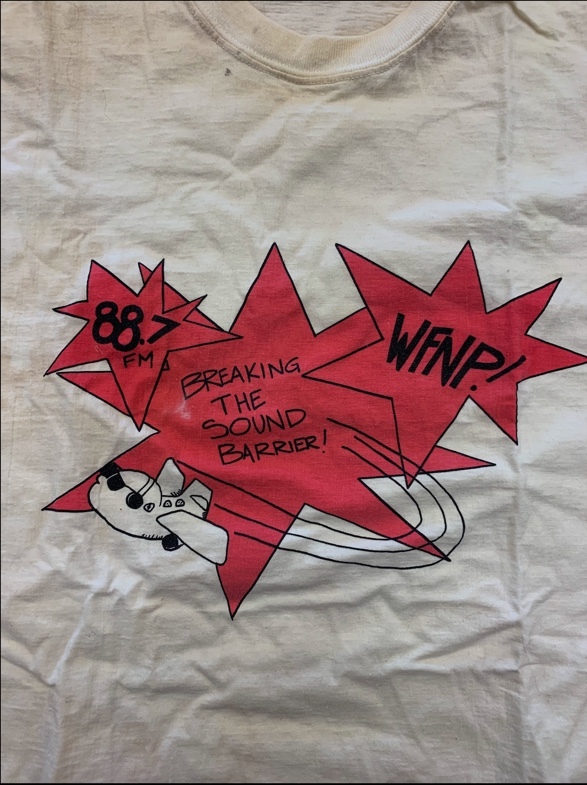 The third of the station shirts, but the first with the WFNP call letters.

The third is a white cotton T-shirt, size extra large. The front displays an image of three-pointed, star-like shapes, similar to those you might find in a comic book to express an explosion or onomatopoeia. The largest explosion shape in the center reads “Breaking The Sound Barrier” in black lettering. The mid-sized explosion shape on the right-hand side says “WFNP!” in bolded black lettering, while the smallest pointed shape on the left side says “88.7 FM” also in black lettering. There is a white cartoon airplane with sunglasses and headphones flying out of the pointed shapes. This shirt is wrinkled and appears to have a few small coffee stains on the front, in addition to some yellowed sweat stains in the armpits.

The fourth is a white cotton T-shirt with a rather large, more intricate design on front. “WFNP 88.7 FM” is written in bright green lettering on the top of the design. The center has the silhouette of a human head in black, with green and white images of a leaf, a city, and a galaxy on the area where the brain would be located. This silhouette is over a background of a graph of radio frequencies and wavelengths. At the bottom of the design are knobs and meters to measure volume. Curved along the bottom of this design is the expression “open your mind to music outside the mainstream” in bright green lettering. This shirt is a size extra large, and is relatively soft, but still crisp with time. 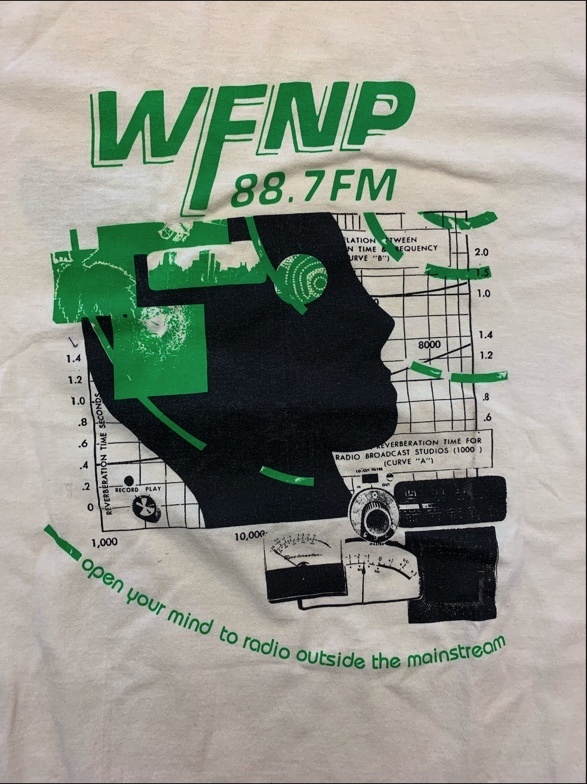 My personal favorite of the station shirts, the fourth.

The final shirt in this collection is a very simple, gray cotton T-shirt with “88.7 FM The EDGE” written in dark blue lettering on the front chest area of the shirt. Underneath “the edge” it names the website, “www.wfnp.org.” The back of the T-shirt says “Bringing You Cutting Edge Music Commercial Free!” with an image of a radio tower emitting a signal below it. The entirety of the design and lettering is in the same dark blue color used on the front of the T-shirt. This T-shirt is also a size extra large, and is soft to the touch. It does not appear to be worn as extensively as the other four shirts.

This collection was donated by Dennis O’Keefe. Dennis graduated from New Paltz in 1973. He was the General Manager of the radio station when it was first established in 1971, and he was a key player in the efforts to get the station up and running and wiring the campus for the AM signal. Even after he graduated, he was still an active background member of the radio station and also worked at the campus library. He collected these T-shirts over many years, starting at the birth of the radio station, through its development, and up until his death in 2006. He donated this set of shirts to the Special Collections of the Sojourner Truth Library before he died. 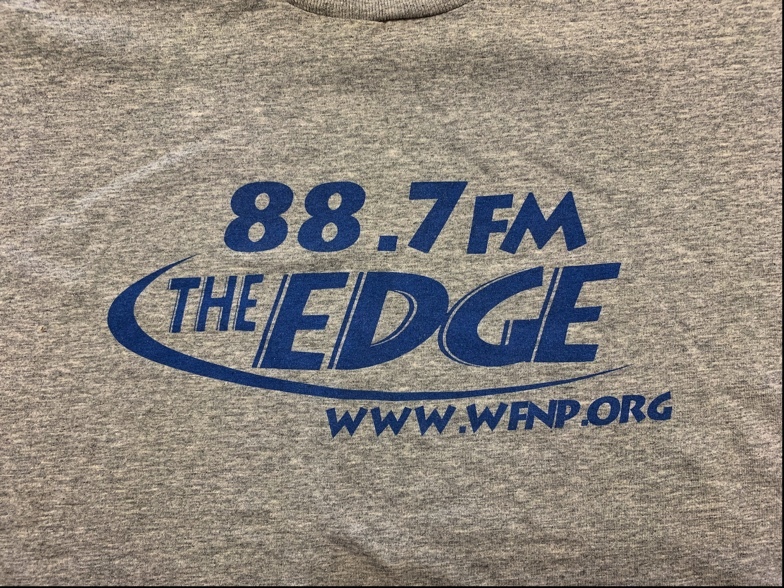 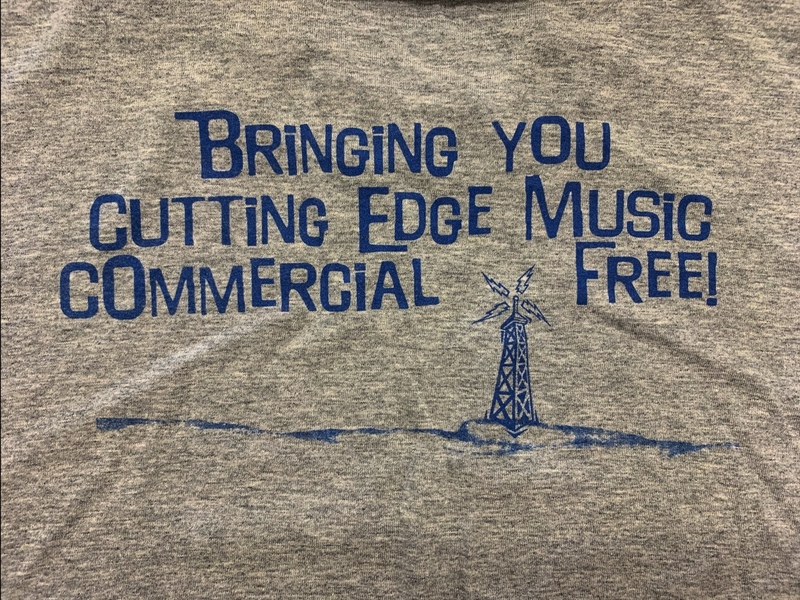 Although the popularity of radio may be declining, forty years ago, this was not the case. In the 1970s, turning on your radio was the easiest and most popular way to discover new music and hear classic favorites. So, in 1971, a group of students worked together to establish a college radio station at SUNY New Paltz. The basic foundation for the station began in 1970 when Bruce Blatchy donated $40,000 to be put towards equipment for the radio station. From there, he held elections for members of the executive board, which was to consist of students. At this time, there were four student positions: General Manager (Dennis O’Keefe), News Director (Robert Sholinsky), Program Director (Donald Weinstein), and Chief Announcer (Marc Greenberg). A single faculty member, Phil Livingston, oversaw the entire operation; but it was his intention that the students be the primary leaders of the station.

Space was set aside for the new station studio in the soon-to-be Student Union Building, but while that was still under construction, the station was temporarily housed in the basement of the College Union Building, were the Yearbook committee worked. To the discontent of the Paltzonian President, they would be moved to a smaller room so that the station could be set up. The president of the yearbook club adamantly rejected this, and in his anger, quit his duties as yearbook coordinator. To this day, there is still no 1973 yearbook.

Amidst setting up the studio, students on the executive board were also needed to wire the campus for the AM frequency. This entailed draining the sewers and crawling through manholes in order to run cable to each of the dorms and the health center. A dirty, but necessary job for the effectiveness and legitimacy of the station.

With the cables wired through campus, and the studio equipment set up in the College Union Building, the signal was ready to be sent out. Being that they were a new station not yet regulated by the Federal Communications Commissions (FCC), they were assigned the AM frequency of 640 kHz. Their call letters were WNPC, standing for New Paltz College. As of February 1972, students could listen to their peers’ broadcasts on their radios in their dorms. By 1973, they obtained permission to broadcast over cable television on an FM frequency of 91.9 kHz. This allowed those in the village of New Paltz to tune in, so long as they had cable television.

By the Fall of 1973, the Student Union Building had been completed, and the station moved to its new studio on the fourth floor of the S.U.B. With this new space, the staff expanded, adding on the positions of Music Director, Chief Engineer, Advertising Manager, Production Manager, and Public Relations. The budget granted to the station was growing rapidly each year from $7,300 in 1973 to $10,000 in 1975. The station was gaining success and professionalism. Plenty of students on campus could tune in to hear classic rock, jazz, blues, talk radio, news, and so much more. Schedules of various WNPC shows were ever present in the campus newspaper. It was a popular and accomplished college radio station.

As of 1980, the station was actively seeking FCC certification so that it could broadcast over FM radio. After several years of hard work and sales pitches to the FCC, the station was finally granted certification in 1989. It has been on 88.7 FM since then, sharing the waves with the classical station WRHV. The New Paltz radio station has one of the tallest transmitter towers of any college radio station, broadcasting 65 miles out. By the early 2000s, the station updated its daytime programming from AM radio waves to a webcast that can be accessed from anywhere in the world at www.wfnp.org.

This station is not a club, but is a professional radio station that is held in high regard. It has allowed students to discuss serious world issues, broadcast important events, and provide easy listening to the entire Hudson Valley. It is a place where students can come together and learn how to use valuable equipment as well as speak professionally on the air. This collection of T-shirts illustrates the growth and evolution of a small college radio station that became a professional, legitimate station accessible from around the world. WFNP The Edge is an example of how far this school has come and all that it is capable of.