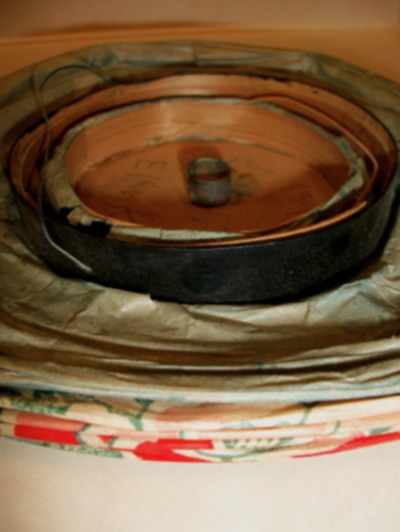 This crinkled paper lantern is a surviving symbol of one of New Paltz’s richest traditions: Lantern Nite. In 1934, this lantern was carried across a night coated New Paltz along with hundreds of others as part of the annual end of the year ritual. Lantern Nite has since disappeared, but this lantern can still tell the stories of the magical night.

In its current flattened state, this lantern might not look like much. But in its prime, it's now faded paper and rusted wire frame would expand to become beautiful traditional Maru paper lantern. The spherical skeleton is held between a thin circular wooden base and a wooden ring at the top, both painted black. There is a now mutilated wire handle attached to the top wooden ring and some splintering from the handle pierces the wood. Adjacent to the fracturing wood, "manufactured in Japan" is imprinted onto the lantern. A delicate teal paper covers the lantern's bones, erupting with a vibrant red floral pattern along its sides. On the interior side of the base there is a metal holster for a candle, the light source that brings the lantern to life.

There are still remains of candle wax hardened to the wood, letting us know that this lantern served its purpose. Written neatly in pencil near the candle holder is “Lantern Nite 1934.” And beneath that, in rougher scrawled text, is the name E. Kniffen. The writing looks as if our lantern's owner signed the bottom when the lantern had already been opened. You can see her extending her hand down into the lantern, struggling to leave their mark. You can feel her presence. 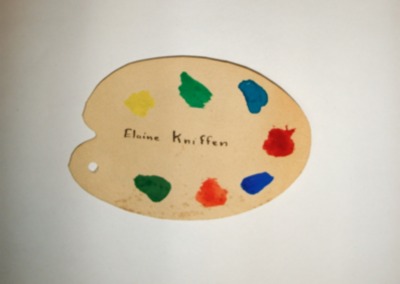 We are not sure how the lantern and the invitation made their way into the library’s special collections. But we can speculate that Elaine–the original owner– may have donated these objects herself. Now these objects display a meaningful part of SUNY New Paltz history, while also giving us insight into the life of one of the students, Elaine Kniffen.

Her name was Elaine Kniffen, and this was her lantern. My question of who was the “E. Kniffen” written on the base of the lantern was answered when I discovered her name an invitation decorated to look like a paint pallet found in the archive box along with the lantern. The invitation had the name Elaine Kniffen on the front. It is an invitation to join the Arts and Crafts club at the New Paltz Normal School, dated February 11, 1935 (which she notes in her senior activity list in the 1936 yearbook) (Palzonian 1936). Elaine carried the lantern on Lantern Nite in 1934. She was a lantern bearer, a prestigious honor, and hers is the lantern that was kept. This was an even greater honor because in 1934, Elaine was a Freshman. Through her involvement in school activities, which we see documented in issues of the Paltzonian, it makes sense that a student as involved as her would get this honor.

And now, her lantern is a permanent part of New Paltz history as it lives in the Sojourner Truth library special collections. Elaine left her mark here at New Paltz; I discovered that the schools still awards a merit scholarship in her name to students who show strong academic performance and contribute to the college community. I want to know the women that carried this lantern and changed her school for the better. I want her to know that she is remembered. Elaine went on to become a teaching assistant, and then moved to Long Island where she taught in the Northport-East Northport School district and was said to be passionate about teaching, music and Hudson Valley history (“Elaine Kniffen”). 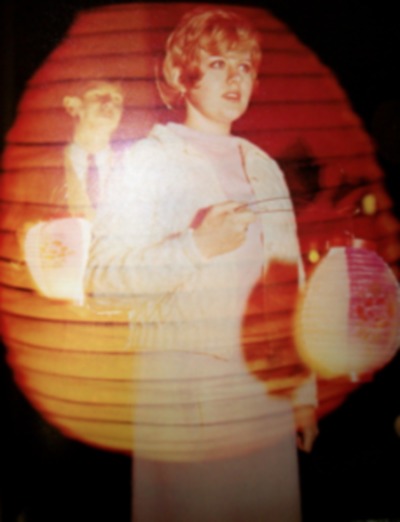 An article from The Nepano, the Newspaper of the New Paltz Normal school described the event: “Lantern Services, one of the most impressive of all New Paltz customs” (“Traditional Latner Service June 10”). I read through years of articles that begin the same way, praising the rich tradition that is Lantern Nite. As a student here at New Paltz today it surprised me that neither my classmates nor myself had ever even heard of Lantern Nite. I had to know more about this lost tradition and its significance to my New Paltz.

Lantern Nite was dreamt up in 1929 by Susan Sposato, Winifred Barry, and Muriel Gregory, who were the presidents of the freshman, junior and senior classes. Lantern Nite was a ceremony held at the end of each year that honored of all three classes (New Paltz didn’t have a four year program until 1938), promotion to the next grade, and their academic progress over the past year. Lantern Nite was a campus wide event, honoring everyone from the seniors becoming alumni to the high schoolers entering their freshman year (“Traditional Lantern Service June 10”).

Lantern Nite services would begin with each class entering campus while singing their marching song. Then the Lantern Bearers would form the initials of their class, using their bodies to make an S a J and an F. The students would then sing their class's song paying tribute to their individual graduating class. In 1930, the ceremony was improved with the addition of the students singing the Alma Mater and the Senior Serenade, and in 1931 faculty began participating in Lantern Nite. The Seniors would march in their caps and gowns, and the remaining students would wear the colors of their respective classes (“Traditional Lantern Service June 10”). In later years all participants would wear white as they carried their lanterns across the dark campus, illuminating the night with celebratory voices and glowing lanterns. 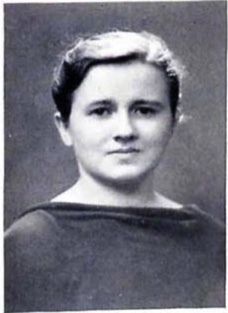 All students were allowed to participate in Lantern Nite, but leading your class as a Lantern Bearer was an honor that had to be earned. Lantern Bearers were chosen by faculty members and class officers and then subject to approval by Dr. van den Berg, who was the last principle of the New Paltz Normal School. Each class was led by a specific number of students that represent the ratio of men to women at the college that are in attendance at New Paltz. In 1937 twenty-five girls and eight boys from each class received the honor of being named a lantern bearer, but only the girls actually carried a lantern at the ceremony. Joining the selected lantern bearers were the officers of each class who were automatically included. Lantern Nite was a refined, highly practiced event that was part of an elaborate series of commencement week rituals. Each class would have rehearsals leading up to the event, and Lantern Bearers had to attend additional practice sessions.

For decades, Lantern Nite was a beautiful part of life here at New Paltz. Each year in mid-June as the sun set over campus, students were preparing for Lantern Nite. I can imagine the scene in all of its grandeur. The classes excitedly huddled together wearing their designated attire, whispering and practicing the Alma Mater, and recounting their year here at school and getting ready to honor all that they had accomplished. They would hold their lanterns tightly in their hands, waiting to light the candle within and begin their procession around campus, commemorating the lives that they have led in their time here.

Imagining a scene like this takes my breath away. So then why did the rich tradition of Lantern Nite extinguish like a worn-out candle flame? Along with Elaine’s lantern there was another lantern from 1987. I searched through issues of The Oracle, which became the school newspaper in 1938, and I couldn’t find a single thing about Lantern Nite after that date. It seems that 1987 was the year that Lantern Night was laid to rest. I can’t understand how such a beautiful tradition that was so ingrained in the history of New Paltz was allowed to vanish. But maybe there is hope for this shining example of New Paltz tradition, maybe someday the students will have their chance to carry a lantern of their own.