Colonial Revivalism in the Deyo House: The Purpose of a Print

“Escape of a Huguenot Family after the Massacre of St. Bartholomew”

London published June 1st, 1880 by Henry Graves & C° the proprietors publishers to HM the Queen and TRH the Prince & Princess of Wales, 6. Pall Mall – copyright registered. Entered according to Act of Congress in the year 1880 at the Library of Congress in Washington. 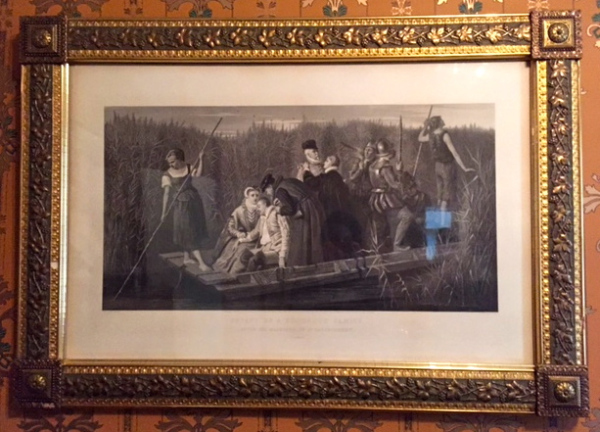 This late 19th-century print depicts a romanticized scene of the Huguenots as they fled religious persecution in France. It is one of three such images in Abraham Brodhead’s office that act as a visual reminder of his cultural participation in the Colonial Revival movement that once swept through the Hudson Valley. (Personal Photo) 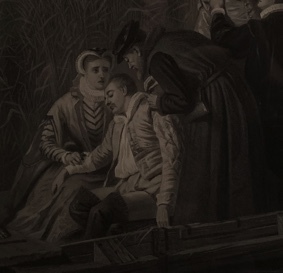 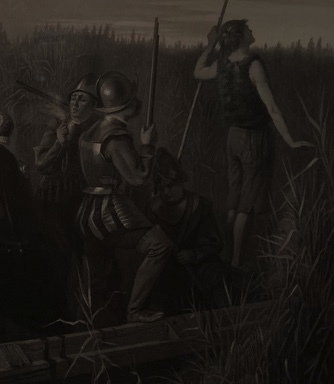 Young Peasant boy looking over front of the boat, two men in armour behind him. (photo credit: Claire Dawkins)

Hanging on the north wall of Abraham Brodhead’s small second story office is a 25.5 in. x 34 in. print, set within glass, and against a 3 in. linen mat. The frame is ornately carved wood, about 2 inches thick and decorated with gold colored paint. The prints’ somewhat ostentatious frame reinforces the propagandistic nature of the scene, and both serve to catch the visitors attention almost immediately. The composition pictures a young peasant woman standing at the back of a raft, steering it through tall reeds while the elderly woman sitting next to her looks worried as she consoles the disheveled elderly man leaning on her shoulder. Behind the couple are two bearded gentlemen, one who leans down to aid them, and another who stands proudly turned towards the front of the raft while a woman wraps her hand around his neck and gazes desperately at his profile. Just in front of them are two men wearing armor, one faces front while the other looks back towards the party sympathetically. Lastly, two young peasant boys crowd the front of the boat, one attending to his weapon, and the other standing with his head up, looking eagerly towards whatever might lie ahead.

The printed inscription that lies just below the image is a key factor in discovering the origin of the print. James Scott (ca. 1809-1889), whose name is found on the lower right hand corner, was one of the finest English engraverseses of the mid to late 19th century. Not much is known about his art education, but he became equally talented in the genres of portraiture, history paintings, and sporting subjects. Scott earned notoriety when his portrait of the Duke of Wellington was published in 1837, and over the next fifty years he engraved a large number of designs after the works of contemporary painters. Henry Graves & Co. was a publishing house in Pall Mall, London that was active between 1844 and 1899, and it ended up publishing over one hundred of Scott’s prints within that time period. The National Portrait Gallery in London now houses over two hundred prints published by Henry Graves & Co., twenty-two of which are attributed to the artist James Scott. The inscription informs us that this print was published on June 1st, 1880, and dedicates the work to Her Majesty the Queen of England, and Their Royal Highnesses the Prince & Princess of Wales. This formality may seem odd in modern practice, but it was customary to honor the head of state in all matters of fine and high art especially for those who distributed prints & literature. Although it is not known how this particular print came to be in the Deyo-Brodhead family collection, we are able to infer that it was some point after 1880 when, as the inscription tells us, it travelled to Washington and passed through the Library of Congress. 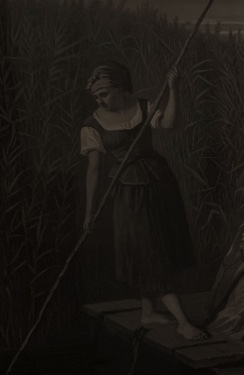 You may wonder how this unique foreign print became a part of the modern day Historic Huguenot Street collection. It’s a dramatic image of a purely fictional event; the raft that all ten Huguenots seem to be floating on could have never held the weight, and the socioeconomic diversity of their fleeing party (as is evident in the clothes they’re wearing) appears democratic, but highly improbable. It is true that over 5,000 French citizens were killed during St. Bartholomew’s massacre on August 23, 1572 in Paris alone, and thousands more fled the country permanently, but this particular rendering of the escape is inaccurate. What, then, is the point? Why would a respectable descendent such as Abraham Brodhead want a romanticized print that remembers this traumatic moment in French Huguenot history hanging in his primary office? Understanding the owners’ personal history and examining the broader cultural context of the Hudson Valley during the late 19th century yields quite a fruitful explanation.

In 1894, Abraham and Gertrude Brodhead received notice that they had inherited what they believed to be a large sum of money from a “rich banker uncle”. Pierre Deyo was one of the original Patentees of New Paltz and had built his stone house along the main thoroughfare of the settlement in 1720. Slowly over the years, Deyo’s grandchildren added other stone additions to the rustic house, but none as dramatic as what Abraham and Gertrude built nearly two centuries later. 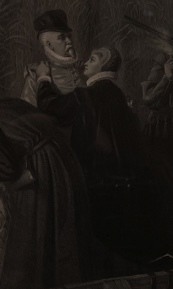 Man and a Women embracing.

At the ages of 37 and 32, Abraham and Gertrude regarded their inheritance as an opportunity to join a new, higher class of society. The period of Colonial Revivalism that emerged in 1876 was a national expression of Early North American culture; although its underlying goal was to create a particular historical consciousness pertaining primarily to the original East coast colonies, the movement manifested itself as a style of architecture, decorative art, and landscape design. In keeping with the trend, the couple took out several bank loans (all of which they believed they would be able to pay off after the family money came through) and began reconstructing their small ancestral stone house into a three-storied mini-mansion. The stone foundation was retained as an important reminder of the family history, and once construction was complete, the original one room stone house became the couples’ main entertaining space. Abraham and Gertrude were able to welcome their guests into their lavish, contemporary home and point to the exposed wooden beams of their sitting room as a visual reminder of their ancestors’ hard work (and more importantly, of the Brodhead’s inherent privilege to that status). 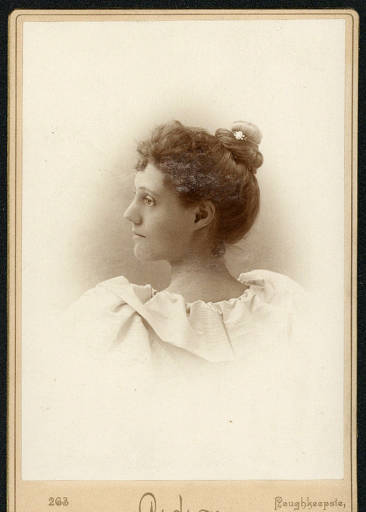 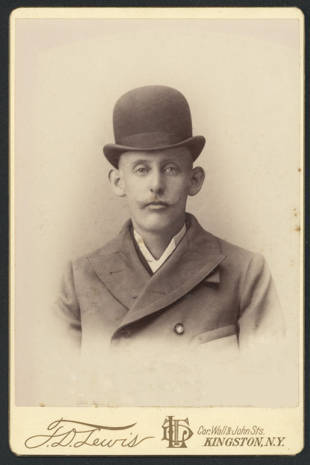 The Brodheads were “competing”, for lack of a better term, to be part of this new realm of American society, and they hoped to achieve the same level of opulence and grandeur that they saw in families like the Roosevelts & the Rockefellers. The Hudson Valley had turned into a hotspot for Colonial Revivalism and in an effort to stand out, the Brodheads chose to advertise their heritage..

Besides their newly impressive home and manicured gardens, what better way to display that particular connection than through decoration? This is where the interior of the Deyo-Brodhead house becomes important to the underlying Colonial Revivalism theme; family heirlooms and antique furniture inhabit every room, and dozens of prints & portraits dot the walls. In 1894, the Brodhead’s family home had become a stage, and these objects, acted as their props. The image that James Scott created in 1880 is overwhelmingly sympathetic to the Huguenots, but more importantly, it portrays them as a resilient and brave people. The proud man comforting the emotionally distraught woman on his chest as he looks towards the future is an overt symbol of the Huguenots’ heroism. They were persecuted as French Protestants and run out of their own country, but instead of dying out and accepting defeat, the Huguenots became pioneers of a new land. When Pierre Deyo and the eleven other founders of New Paltz came to settle the area, they faced deadly inclement weather, starvation, and hostility from the Esopus Indians who were ready to defend their land. These are the types of stories that would have been told as esteemed friends and colleagues visited with Abraham in his office, and these are the pieces of history that served to glorify the Brodhead name.

It seems somewhat strange that the true value of this print is indeed the lie it presents. Its ornate frame indicates that the print was displayed and appreciated as a piece of fine art, but its true function was as an ancestral advertisement. Although a modern perspective could perceive the Brodhead’s as power-hungry, it is crucial to remember that they were one family among a large scope of the American population who participated in this cultural obsession.

In many ways, the Deyo House—and the 19th century art and artifacts that are now kept inside—add to the rich history of the original settlers. By examining the Brodheads and the way in which they attempted to re-establish a family legacy, we are able to better understand the complexity of this noteworthy print, and the role it had in reviving an idealized memory of the Huguenot settlers.