Searching for Truth in a Legend: The Case of the Huguenot Ring 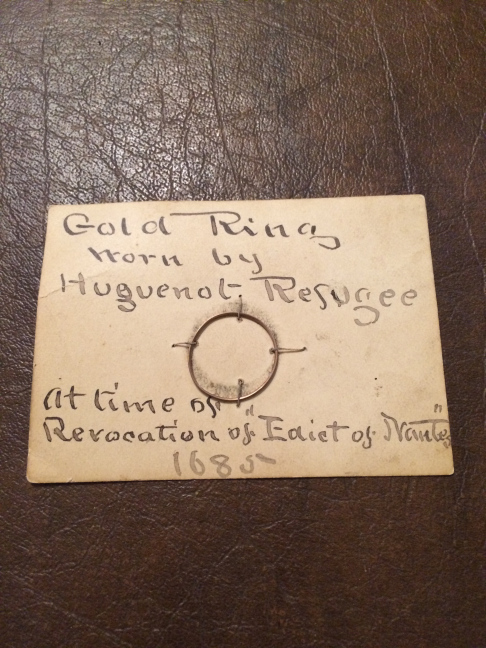 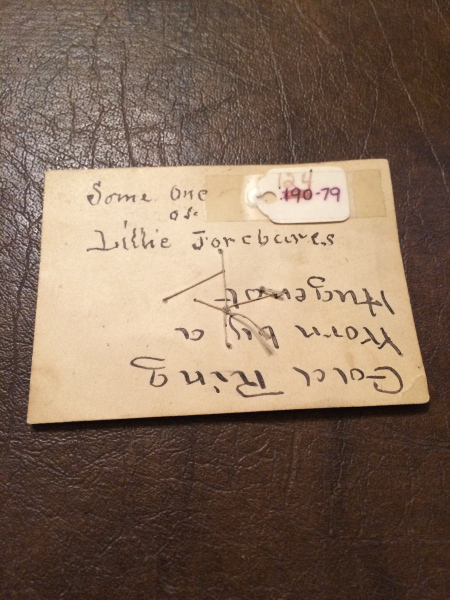 Tucked away, inconspicuously in the corner of a collection box under a thin cloth laid a piece of paper with a ring fastened onto the rectangular sheet. For the Historic Huguenot Street historians however, it is an item that could possibly be one of the oldest and most interesting to their collection if legend can be proven as fact.

Physical Description: The ring is fastened to a piece of somewhat thick paper, thicker than typical writing paper of today. It is fastened to the middle of the paper by four pieces of string, punctured through the paper and tied together on the backside. The ring has left a grey circle on the paper where perhaps the material of the ring has rubbed off onto the paper from years of being attached. The information has been written onto the paper to which the ring is secured that suggests a great history for such an unassuming object. “Gold Ring worn by Huguenot Refugee // at time of Revocation of “Edict of Nantes” 1685” is written in ink on the front of the paper above and below the placement of the ring. The script certainly looks like it was written from a different time where words were written by quill and ink with a more expressive style. The back of the paper possibly reads: “Someone of Lillie Forebares” though the handwriting is somewhat illegible as compared to the other writing on the paper. Additionally, written upside-down and opposite the aforementioned description is a repeat of the front detail, this time stating: “Gold Ring worn by a Huguenot”.

Provenance: The object was donated to Historic Huguenot Street from a Ms. Katherine Wells and Mr. Freeman Lasher in memory of Edith E. Hasbrouck. A ring of such simplicity could have been a wedding band worn by one of the Huguenots who sought refuge in this area of New York or possibly in one of the European countries the Huguenots fled to such as Ireland, England, the Netherlands or Germany. The secondary object, the piece of paper the ring is attached to, comments on “someone of the Lillie forebears” which is a potential link to the ownership of the ring. 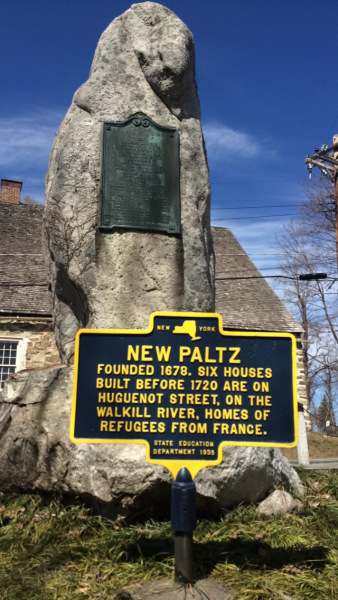 Narrative: Little can be determined about the ring’s history by just simply observing the ring itself. It is a humble piece of jewelry that would call little attention whether on a finger or off for it is thin and without markings, as plain as a ring can get. On the sheet of paper, it is fastened to, it is referred to as a gold ring though that is an assumption thus far. It bears no markings or decorative details that would signify a maker, time period, or owner. The ring is simply a circle of metal. The claim on the piece of paper that a Huguenot refugee wore this ring during the Edict of Nantes is of both huge significance as well as speculation. It is simply a claim after all; hearsay, a myth. We cannot directly ask the object questions or will it to provide us with all the answers.

The object combines fascination and frustration–it could potentially be an object of great importance for it could be a material link to the very event that caused the great emigration of Huguenots to various places around the world, in this particular case, our home of New Paltz. However, it could, unfortunately, be of no consequence at all– perhaps a history fanatic with a grand imagination or a distant relative related to someone in the New Paltz genealogy retelling of a tale, that may be more fiction than fact.

This object has been a source of enchantment. Regardless if its history is true or false, when one thinks about this ring, it is likely that nostalgia will take over as it has the potential to be a miniature piece of a dramatic history that is so influential to this town’s past.

The Edict of Nantes was a French law passed by King Louis IV allowing French Protestants a degree of religious freedom to publically worship their religion with full civil rights. And in 1685, King Louis XIV overturned the edict of Nates and many protestants of France (the Huguenots) fled persecution and came to the New World. This is what spurred the emigration of the Huguenots to what would become New Paltz. If the description on the paper were indeed true, that would mean this ring was worn by a Huguenot seeking refuge in response to the revocation of the Edict of Nantes and furthermore, this person could belong to a Lillie ancestry (as inscribed on the paper) but there is still much to explore. In contrast, if this is false, then who crafted this story and why? Who are the Lillie’s, if anyone at all? Who may have worn this ring and from where did it come? 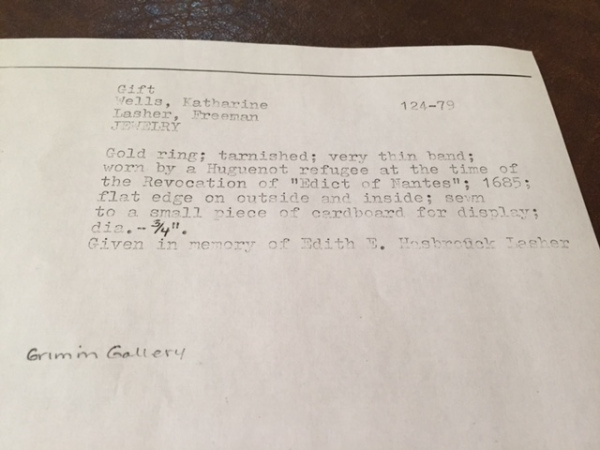 In initial searching, little has been found about a Lillie family connected with the Ulster County settlement by the Huguenots. However, some information was found about the Lillie Family of Lisburn in Northern Ireland. These Huguenots are descendants of de Lilles from the town of Lilies in France who left the country for Ireland in the 1570s following the Massacre of St. Bartholomew’s Eve in 1572. Is it possible that one of the Huguenots who came to the Hudson Valley is connected to this family line and wore this ring? If no Lillie family is connected to New Paltz or elsewhere in New York then it would be important to determine any connection the donors may have had with this ring and why they chose to donate it in memory of Edith E. Hasbrouck.

The ring is so painfully simple that upon inspection, nothing can be derived from the materiality of it. However, the object does show us that we can emotionally connect to even the most basic of items. If this was, in fact, a wedding band from the 1600s, then the society has in its hands an item that bound two people through the placement of this item on their finger. Those people’s histories are a part of the ring as well in addition to anyone after them that wore this ring and carried it with them through their life. Now the ring has a new layer added onto it as it resides at Huguenot Street, it's new home. We perpetuate the utter fascination with this object with the legends we imbue in it since its origins ultimately remain a mystery.

← Multi-Purpose Basket
History in Print →
Reconstructing the Past
Huguenot Ring