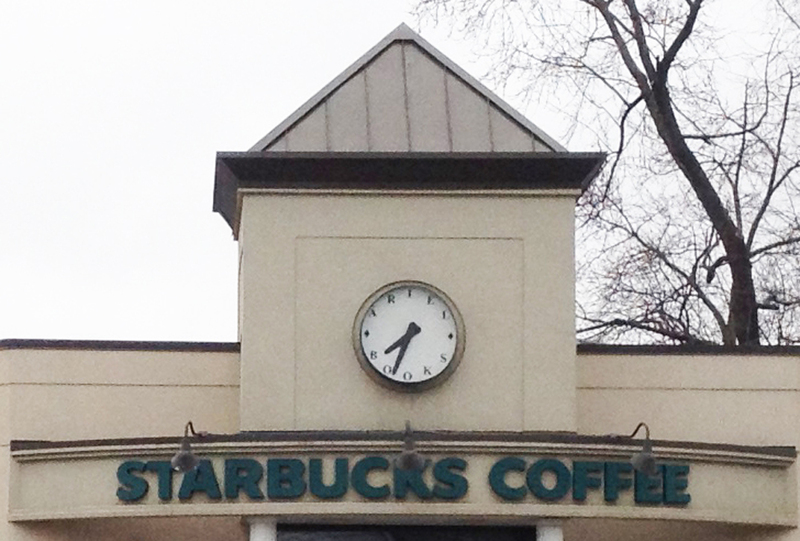 Overlooking the bustle of New Paltz’s Main Street, this clock represents the history of a business that is no longer there. Ariel Booksellers (1971-2005) was once a cornerstone of the town, offering a wide selection of books for community members and college students alike. Now the clock pays tribute to the fallen establishment and evokes a sense of mystery to those who seek it.

Right at the corner of Plattekill Avenue and Main Street is arguably the busiest intersection in the town of New Paltz, acting as a bypass for those traveling through the town, yet riddled with crosswalks where pedestrians control the traffic. Here there is a sense of ebb and flow, of intuitiveness and trust that makes this a rich community center. Appropriately, this is the location of the Ariel Books clock. When a person comes to the town for the first time, whether a tourist or college freshman, he or she may notice the clock and think it adds to the small-town charm. However, if there is not too much glare from the sun and the visible situation is just right, one can make out the letters around the face of the clock, paying homage to an “Ariel Books." Although the book store is no longer here, it had been a community staple and a part of New Paltz’s history.

Dean and Susan Avery came from New York City and fell in love with the New Paltz charm. By 1971, they opened the bookstore, occupying half of the space which was once a gas station (while the other half was used as a shoe store.) The name “Ariel” came from a reference to poets Percy Shelley and Sylvia Plath. At the time, there was only one other bookstore nearby, so Ariel had no problem becoming a community staple.

As the years passed, the Averys added space to the store, widening their inventory and increasing their counter space. The addition in 1985 led to an increase in student supplies to cater to the nearby SUNY needs. However, it was the renovation in 1999 that was the most dramatic. The addition would increase the bookstore’s size by 525 square feet, while adding an additional 1,300-square-foot cafe space. In order to keep up with their large chain competitors like Barnes and Noble, the Averys planned to incorporate a cafe into their business. 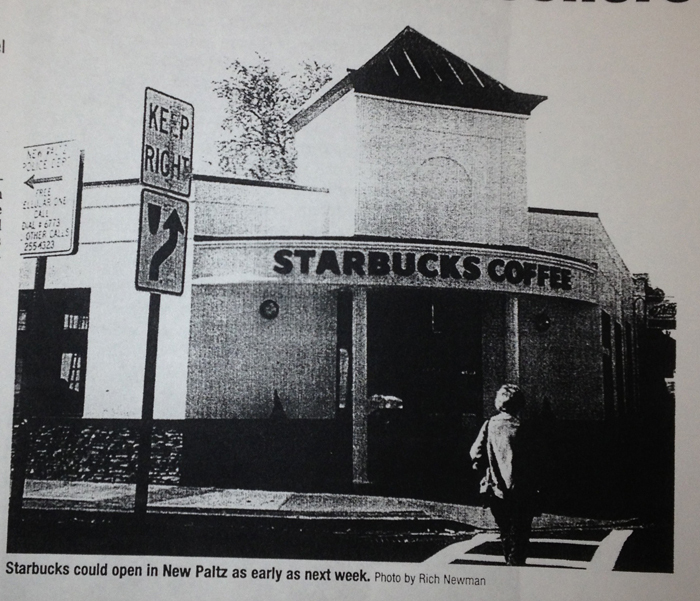 Herein lay the question of what cafe should occupy the space. Although the Averys had tried to bring in local businesses, they found no success in doing so. In their 28 years of being in New Paltz at that point they had seen the rise and fall of several failed cafes and did not want to repeat the pattern. So the Averys opened their space to Starbucks, but were met with major controversy from members of the Village planning board. Starbucks represented large chains and big business that were thought to detract from the small town, independent feel of New Paltz. However, the Averys and Starbucks won out and opened their doors on November 6, 1999.

The Averys claim having the coffeeshop as tenants helped keep their business thriving for as long as it did. However, with the decline in book sales, Ariel Booksellers, like many other independent bookshops, had to cut its losses and close in 2005.

Sometime before its closing and after Starbucks moved in is when this clock made its first appearance. It seems to serve as a way to label the building as property of the bookstore. Town members can be reminded of the building's small town landlords that were able to literally leave their mark, even when faced with the controversy of bringing the big-time chain to New Paltz.

Facing out on the bustling New Paltz Main Street, the Ariel Books clock tells time in more ways than one.

Newman, Rich. “Starbucks to make a splash next door to Ariel Booksellers.” The Times Herald-Record. 30 Oct 1999.