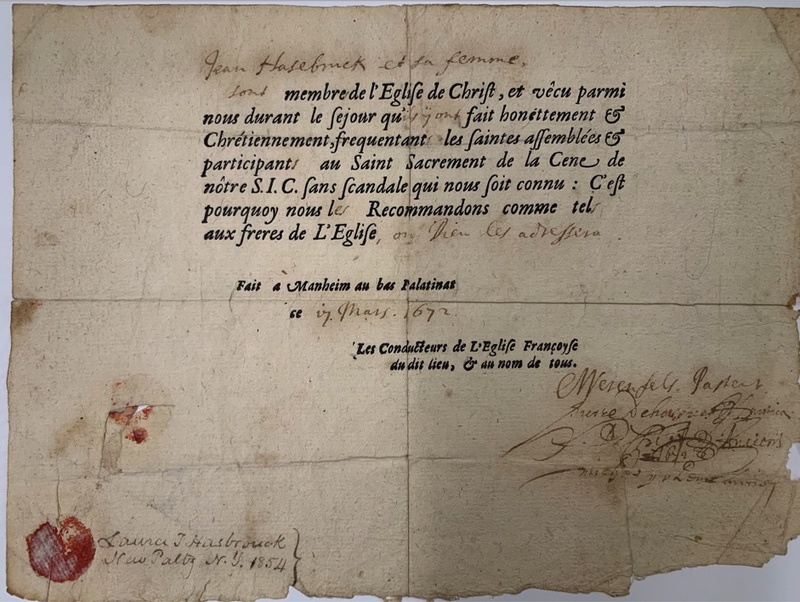 This document is yellowing and cracking with age. There are permanent marks running horizontally and vertically across the paper from where it was folded over many times. In the lower left corner there is a small, red wax stamp and next to it is written, “Launa J Hasbrouck New Paltz N.Y. 1854”. The edges of the documents are uneven and damaged with sections of the paper ripped out. The letter is printed in French in italic typeface, while Jean hasbrouck’s name and some small details throughout the letter are written in by hand. This letter is an early standardized form that allowed the pastor to fill in the names of the church patron he was recommending and to sign at the bottom.

Translated into English, the letter reads, “Jean Hasebruck and his wife are members of the Church Christ, and have lived among us during the time that they spent here, honorably & in a Christian way, attending the holy services, and taking Holy Sacrament of the Supper of our Lord Jesus Christ without scandal known to us. Thus we recommend them as such to our brothers in the Church where God will send them. Written at Mannheim in the Lower Palatinate this 17 March 1672 The leaders of the French Church in the said place & in the name of all…..”  This letter shines light on the devout practices of Jean and his wife and advertises them as good additions to the church community. It is interesting that the Hasbroucks are identified as, “without scandal known to us,” which makes it read as if the original church from Germany did not want to be blamed for any transgressions made by the couple. Looking at a document such as this reveals how centrally religion and the church community were ingrained into life in the new colonies. 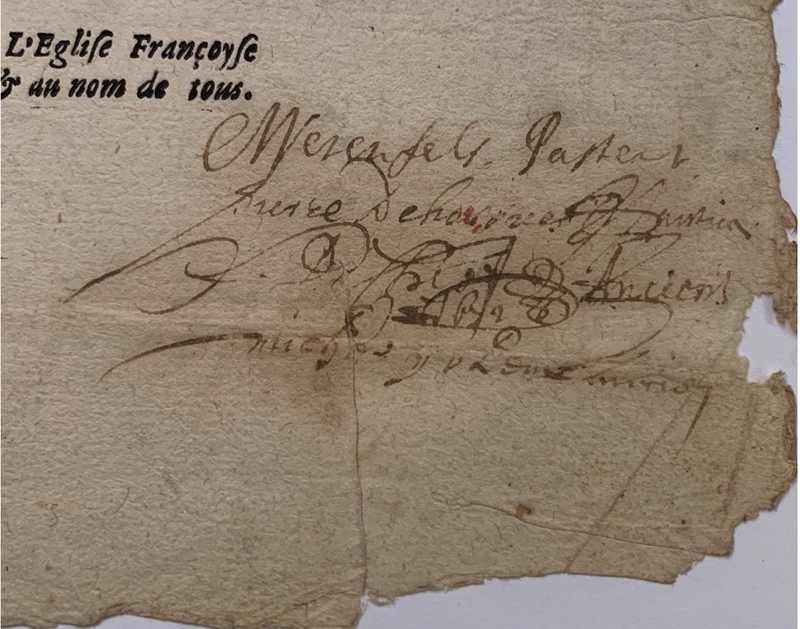 Signature of the Priest in Manheim. (photo credit: Claire Dawkins)

Like many other objects of the aging Historic Huguenot street collections, this object begins and ends as a mystery. The mystery begins with its arrival at Historic Huguenot street. The records are unclear exactly how this letter came into the collection, the donor information lists three donors, Anette Innis Young, Hylah Hasbrouck, and Walter Hasbrouck. These possible donors were all descendants of the Hasbrouck line, so it makes sense that this document would be in their family collection. It is believed that this paper was donated in a set of family papers, but once again we do not have solid information on this. The time of donation ranges from 1950 to 1980.

The story of letters of recommendation like this one begins in 1598 when King Henri IV of France passed the Edict of Nantes, a law that stopped the religious persecution of Protestant communities and individuals in France (The Edict of Nantes (1598)). This groundbreaking move towards Christian religious equality in Europe allowed for the development of strong Protestant communities and churches across France. Then our story lays dormant, just as these communities are rising to prominence and stability, until 1685 when King Louis XIV revoked the Edict of Nates and French Protestants lost their right to practice their faith in France. He created a refugee crisis as French Protestants fled the country.

After the massive migration caused by the revocation of the Edict of Nantes, Protestants scrambled to find ways to keep in touch with the family and community they formed in France. Letters of recommendation were a simple way churches were able to stay connected, even internationally. By linking individuals from one church to another, Protestant communities across borders were able to keep track of where people worshipped and it left a paper trail for family members and community members to find one another. Some Protestant scholars even see the Edict of Nantes as a positive for the world community of Protestants, “Migration and dispersal seems to have strengthened these ties and it became necessary for them to form ‘international’ networks which might compensate or for the break-up of families” (Lachenicht 313).

In the original flight from France, many Huguenots would not have had time to grab all their things and plan their departure. This banishment sent French Huguenots all across Europe. They settled   in the Netherlands, England, Germany and even the colonies in the Americas. Jean Hasbrouck, like many others, fled to Germany where small French Protestant settlements were developing. Here, Jean created a place for himself and his small family. We know from church records from Manheim, Germany that Jean and his family were members of the church and had their children baptized there. Jean would have requested this recommendation from his pastor specifically with plans to go to America, or if he was fearing any form of persecution and he wanted his family to be able to easily integrate into a new church community at a moment’s notice. Letters of recommendation were standard across Christian religions for many years. These letters allowed people to integrate into the new church communities with ease. Without these letters there would be a sort of vetting process, but the person would not be outright denied access to the church and its services. Letters of recommendation created an understanding of trust between the church members and this new individual. Having another church member vouch for you is showing that your sentiments and behavior align with those of the church. 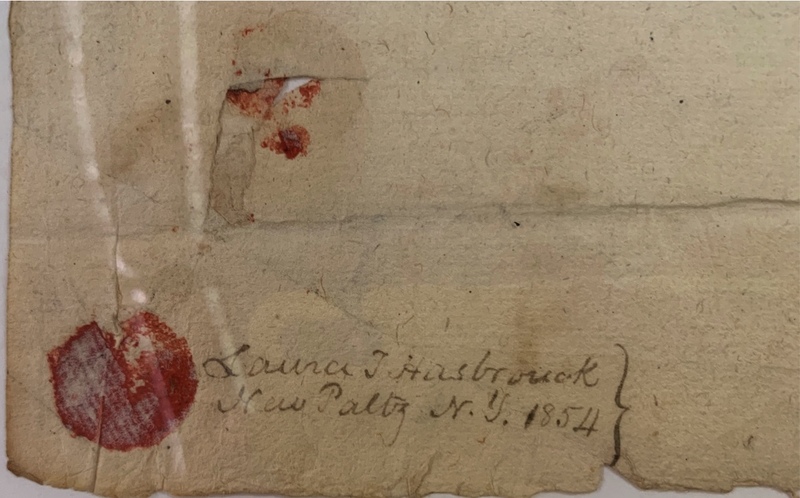 Image of the stamp on the lower-left corner of the letter. Launa Hasbrouck's signature also pictured. (photo credit: Claire Dawkins)

From the Old Dutch Church records, we can see the vetting process many new members had to go through just to enter the church. Some new members were accepted with only a “profession of faith”, but it only gets more complicated from there. Many new members had to participate in House visitations. On April 21st, 1692 Jaques Dubois was admitted? after, “House visitations done by minister of New Albany and alder Benjamin Provoost before Communion on the 24th of April” (Old Dutch Church Members 21). Not only did the church want Dubois to take communion with them, but they also required a house visit to make sure he was a devout Christian who aligned with their values. Even though Jean Hasbrouck is not on record in the Old Dutch Kingston Church, we have other prominent New Paltz names. Louis Dubois and his wife, Catharine Blanchan Dubois were both accepted into the church on October first, 1661 with a “letter of transfer” (Old Dutch Church 4). “Accepted with a letter of transfer,”, is not uncommon in the church records, but there are many more people who have little to no information on how they were accepted. From church records, it appears that letters of recommendation were not required to enter a church community, but rather they made the process of assimilation easier on the new member and the church as a whole.

The Hasbrouck Family in America by, Kenneth E Hasbrouck, says Jean left Manheim Germany on May 16, 1672, and then places him in New Paltz in the Spring of 1673. Jean Hasbrouck would have first given this letter to the Old Dutch Church in Kingston, which was the only church locally until 1783 when the New Paltz church was built. After establishing himself as a devout and good Christian in the Kingston church, it is unlikely he would have needed this document again. This theory seems accurate until you reference the Kingston Old Dutch Church records, and we find that Jean Hasbrouck’s name is absent from the parish registry. It is possible that Jean and his family were active members of the church and for some reason, his record slipped through the cracks, or rather that Jean and his family may have attended church services but never became official members of the church. Jean Hasbrouck may have also used the recommendation letter later on at the New Paltz church. We can not know for sure, but we can use this recommendation letter and other supplementary church records to get a better look at religion in New Paltz.

Why did this document survive this long, when many of the others letters of recommendation in Old Dutch Church records are nowhere to be found? This letter’s life and condition can partially be attributed to the Hasbrouck family’s long standing investment in preserving local history. Some of the oldest documents held at Historic Huguenot Street (like this one) are from the Hasbrouck family line. This letter of recommendation is a clear connection between Protestant churches in Europe and in the U.S.. The letter also gives the Hasbrouck family and historians a clearer picture of Huguenot migration, and more specifically, Jean’s movements across the Atlantic.

In a time without government mandated and monitored checks on identity, this is the closest we can get to a modern-day passport. Today, we place such an emphasis on the power of passports, IDs, greencards and visas, so much that people are losing their lives over crossing borders and by the hands of anti-immigration forces. This slip of paper with a generalized printed inscription is a look into the development of immigration policies in the 17th century. While it is only religiously based, the system of entering a community based on a slip of paper is reminiscent of immigration today, and the challenges immigrants face looking for safety and community in a new home.

Mentzer, Raymond A., “Sociability and Culpability: Conventions of Mediation and Reconciliation within Sixteenth-Century Huguenot Community” Memory and Identity: The Huguentos in France and the Atlantic Diaspora. Edited by, Bertrand Van Ruymbeke and Randy J. Sparks, University of South Carolina Press, 2003, pp.45-57.