Breaking Traditions to Preserve an Heirloom: The Napkin Ring 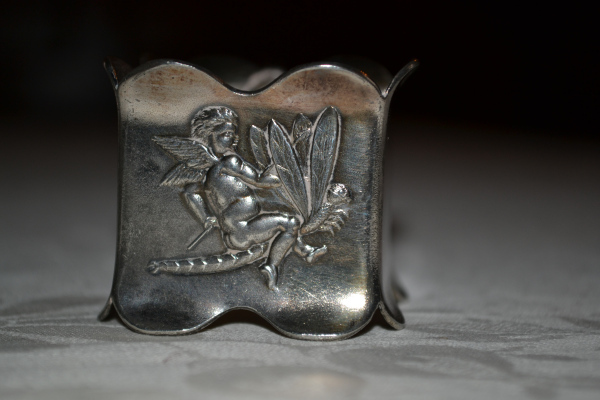 A dining accessory that also functioned as a place card, this 19th century napkin ring belonged to the family of Gertrude M Deyo. This uniquely square napkin ring is embellished with the owner’s initials, and marks a cornerstone of a woman’s life, from childhood to marriage. It also serves as a reminder of the traditional passing of possession of family objects, as well as the need to break tradition to preserve its heritage (Historic Huguenot Street).

Despite the name, napkin “ring,” this item is one and a quarter inch square napkin holder made of silver (Historic Huguenot Street). It has scalloped edges, two curves to a side, along both the top and bottom edges. Considering that this piece dates to the late 19th-century, it has suffered minimal damage, leaving only traces of wear and tear, with small areas of old sticky tape(Historic Huguenot Street).  The main aesthetic feature of the napkin ring is the unique pairing of Cupid and a dragonfly. Cupid is riding atop the intricately engraved wings of the dragonfly (Historic Huguenot Street). However, the cursive engraving of “GMD” is the eye to the history of tradition and financial status in New Paltz.

The initials engraved on the item distinguish it has property of Gertrude M Deyo, born 1868, and this particular pure silver napkin ring was donated with three other napkin rings, one belonging to each of her parents, and one belonging to Gertrude’s younger sister (Historic Huguenot Street, The Deyo Family). Gertrude’s napkin ring most likely stayed with her for a large part of her life, entering into her role as a wife to Abraham D Brodhead, and finally rested in the hands of Gertrude’s niece, Mrs. Henry E Downer (Historic Huguenot Street). The exact date of transfer out of Gertrude’s possession is unknown, and depending on the date, the ring could have passed first into the hands of her sister, Elvira, and then to Gertrude’s niece.

The path of possession of this simplistic dining accessory is remarkably influenced by the culture of the era in which it was created, as well as by the elasticity of the society in which it served its primary function. The ring’s engraving of Gertrude’s initials prior to her marriage designate the ring as a part of childhood. At the time of Gertrude’s marriage in 1890, she most likely brought this napkin ring with her into married life as a dowry to her husband, Abraham Deyo Brodhead (The Deyo Family). Although by this point in time the traditional use of the dowry was being phased out of European culture, it was still a large part of American culture. The dowry’s functioned as a way to begin furnishing the newly weds home, through the passing on of household furnishings It is most likely that this is how all three napkin rings in this set came to rest at the Abraham D Broodhead estate( “Dowry”). 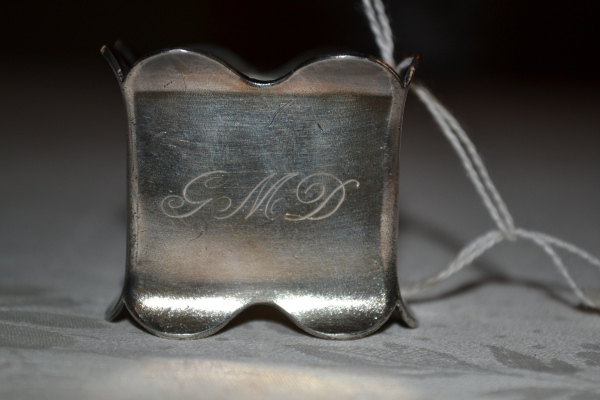 The New Paltz Independence reported in July of 1894 that the Brodhead estate would be renovated, expanding the house and implementing the most up to date amenities. The renovations would preserve the character of the existing home in remembrance of the family’s sole ownership of the property (New Paltz Independence). Over the next few years, the estate was under intense renovations, but by March of 1895, the Brodheads were hosting parties and gatherings in their completed home, which was furnished in the most elegant of fashions (Waite). By the turn of the century, the home exuded the wealth and status that Abraham trying to achieve.

The dining room was the showcase of the family heirlooms, and undoubtedly where the napkin rings would have resided. As recorded by the Deyo House Furnishing Plan, the dining room was encapsulated in mahogany Empire sideboards, with a mahogany drop leaf table in the center, both of which dated to the 19th century. The sideboards and dining table shaped the style of furnishings in the Brodhead house, as did the late-19th century dining set (Haley). The napkin rings would complete the ode to the family heirlooms of the Deyo-Brodheads and would serve as an elegant match to the style of the dining room furnishings.

Just a few years after the home was completed, the illustrious 19th century dining set would soon be out of fashion, and a proper 20th century style called for the elegance of simplicity (Haley). The walls would be left plain, and any silver or glass objects would be used minimally and in rotation (Haley). The tiny napkin rings would, at best, be displayed occasionally as the Brodheads kept with the trends of the time and continued to improve their home.

The home, however, was sold at auction in 1915 due to the bankruptcy of Abraham D Brodhead (New Paltz Independence). For the first time since the home was built, it passed out of the hands of the family that built it and the Brodheads lost their family home. In 1926, Abraham passed away; at that time, an inventory for sales was completed of the dining room’s furnishings (Haley). The napkin rings, absent, must have already passed from Gertrude to either her sister or the last known owner of the rings, Gertrude’s niece. The napkin rings could have passed back into the hands of Gertrude’s family at the time of bankruptcy, preserving the family ownership of the napkin rings and avoid being sold to an outside citizen as was the case of her husband’s family home. The idea of preserving the family’s possessions is keen, even a tiny dining accessory could be the tie between family members and remain as one of the persevering items of the family lineage.