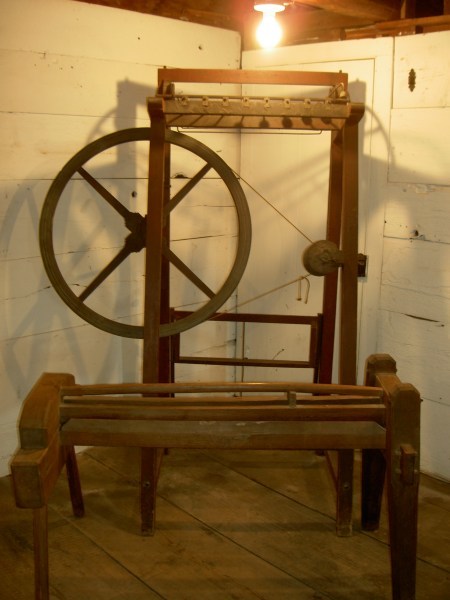 This spinning jenny was given to the Memorial House (the Jean Hasbrouck House) by its owner, William Henry Dill Blake, in 1910; it had been in his family for many years. We do not know for certain what it was used for, but the colonial revivalism movement of the late 19th century can give us some educated guesses.

This spinning jenny is comprised of a wooden frame and a large, slightly corroded iron wheel with four spokes placed at even intervals. On the right-hand side of the wheel is a grooved iron cylinder (also sporting slight corrosion with age), likely used for winding finished thread. The initials “HB” are scratched into the front left pole of the frame, and “213” is marked in many places across the machine’s frame. The “213” markings are made from a stamp and were most likely used to identify parts of the jenny for assembly.   According to the file in Historic Huguenot Street records, there are likely some pieces missing.

This spinning jenny holds several mysteries. Most of these machines operated horizontally, but this model stands vertically. Adding to the first mystery, this machine is missing pieces, so it is hard to get a full picture of how it may have worked. When William Henry Dill Blake donated this machine, he believed that it had been in his family for many years. After carefully studying the objects, Ashley Trainor, the object historian at Historic Huguenot Street, believes this machine is not nearly as old as we first thought. This model more closely resembles the first patent of the spinning jenny, which originated in 1764. Blake’s jenny was, therefore, most likely a later reproduction of the machine in the spirit of Colonial Revivalism. The first clue to determining the origin of the spinning jenny is the inscription “HB” on the frame. William Henry Dill Blake–who donated the jenny– had an older sister Hila Blake. It is possible the inscription “HB” may indicate the contraption for a gift meant for her. Thanks to an announcement made in the New Paltz Independant, we know the jenny was donated on May 6th 1910. Hila had passed before 1910, so it makes sense that her brother may have been getting rid of her things. The “213” markings yield no significant clues, but they do suggest that the machine was manufactured and assembled in parts, meaning this was a mass-produced item.

We do not know the original use of this machine. William Henry Dill Blake and his family were economically stable, if not wealthy. This means that Blake’s wife and daughter would most likely not have needed to use the device for income or cloth-making for domestic use. The Blakes would have been comfortable enough to purchase the majority of their clothing from stores and catalogues. Instead of a practical explanation, we can look to cultural reasons for the family’s ownership. The spinning jenny, along with other weaving, embroidery and stitching techniques and machinery, were a staple of Colonial Revivalism in the nineteenth century. These textile practices encapsulated the 19th-century concepts of patience, virtue, and domesticity that was imagined in the ideal colonial woman.

Colonial Revivalism was a mode of expression through which people attempted to emulate the colonial period in their homes and in their dress. The colonial woman was one of the strongest expressions of this ideology, and weaving and textile work was an important part of this identity. A colonial woman exuded all the traits of the domestic sphere: she was calm, reflective, a perfectionist who was never too stern. This idealized view of a woman was rooted in middle-class values of hard work in the home. One of the ways this lifestyle and aesthetic were advertised was through the representation of a woman weaving or spinning thread (Gordon). Magazines were the first to popularize the image of the “ideal domestic woman.” These publications created social pressure through images and articles that emphasized the importance of returning to colonial values and aesthetics. One example is The Modern Priscilla, a magazine which ran from 1887 to 1930. This magazine catered to women and it focussed on the domestic sphere. We can see the emphasis on the colonial woman identity in the April 1903 table of contents which lists five different articles related to sewing, embroidery or weaving (The Modern Priscilla). Some article titles include, “Mountmellick Embroidery”, “Long and Short Satin-stitch” and, “New ideas for Needlework”. 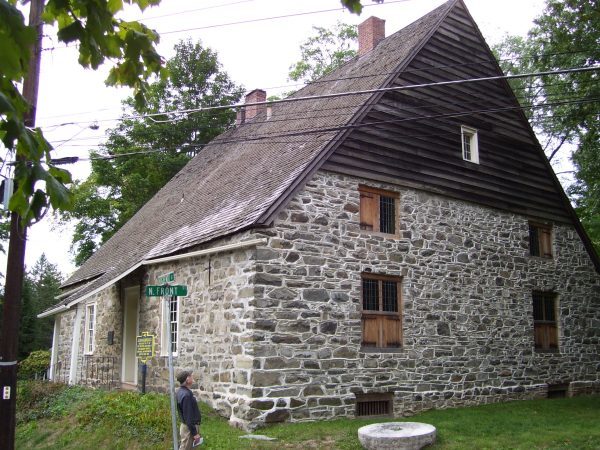 A photograph of the Jean Hasbrouck House, where the jenny is located.

For another example of a massive dedication to the colonial revivalism movement, we can look to homes like the Declaration of Independence house in Connecticut, created 100 years after the signing of the document. In this house, there are many pieces of furniture and art which are meant to emulate the culture and values of the country when it was founded. One of the pieces mentioned is a spinning wheel displayed in front of a fireplace. This documentation places the spinning jenny physically right in the middle of the Colonial Revivalism movement, as an object of importance (Greenfield). Entire homes changed their appearance in order to appreciate the colonial era. The staged appearance of these homes was the beginning of preservation work, where museums and foundations attempt to recreate the settings of a home of the past.

During this time we can see art and furniture that demonstrates the Colonial Revivalist movement, but what do we make of these hobbies and machines that take up so much space in their homes? Hila Blake, William Henry Dill Blake’s sister, may have attempted to fulfill the colonial woman role with the Blake jenny. Why else would an upper-middle class family in the late nineteenth century have a spinning jenny in their home? It was possible the machine was only for decoration in the style of the Colonial Revivalism movement, but that explanation seems unlikely considering how large this machine is. It is more likely that Hila used it as a hobby to spin her own thread, and at the same time emulating the colonial era that was popular and “in”. Hila is not merely dressing in Colonial Revivalism styles, but she is also taking up the hobbies of the period, so much that a machine as massive as this would have sat in her house. There is an even further step into this aesthetic movement as not only are people demonstrating their dedication to this historical period in their homes, but they are also incorporating into their everyday hobbies and activities. The social and cultural values of the Colonial Revivalism movement are what could have influenced Hila Blake, or another member of the family to have this machine. The values of a colonial woman were advertised and reproduced in publications across America and these values were followed by many families locally (see “Colonial Revivalism in the Deyo House: The Purpose of a Print”). While we will never know for sure what this machine was used for, it is safe to say that Colonial Revivalism could have been a large influence on this purchase.

From our perspective today, we can see this spinning jenny as a beginning of historical props that preserved the colonial era. Across the Internet, you can find replicas of almost any object in history. If you want a sword replica, or a historically accurate recreation of a chair, eBay or a hobby site will have it for you. People across Europe have been emulating societies like the Greeks and the Romans, but for the first time, the US was creating its own history, and they were happy to put it on display.

Infinite thanks to Ashley Trainor and Carrie Allmendinger from Historic Huguenot Street for sharing their records, knowledge, and expertise with me for this project.

← Colonial Revivalism: Purpose of a Print
Multi-Purpose Basket →
Reconstructing the Past
Spinning Jenny