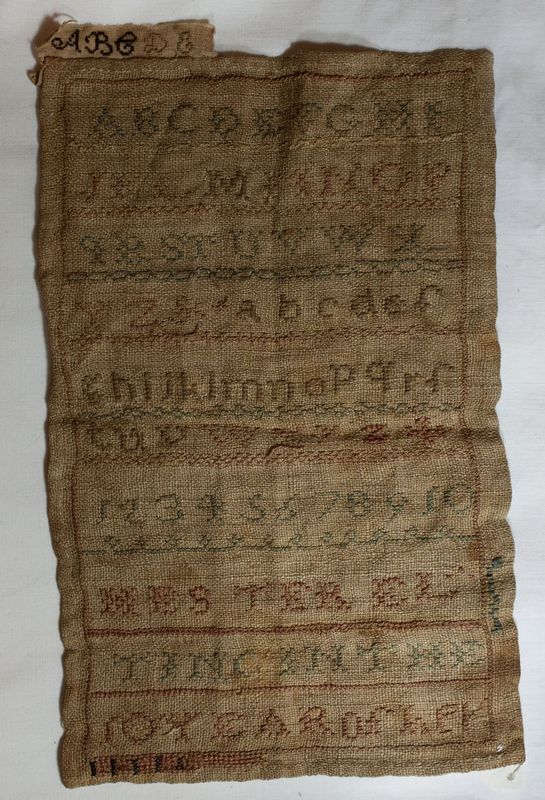 Hester Elting created this "marking sampler" in 1808, when she was about nine years old.     An embroidered sampler of this era was used to teach a young girl the alphabet and numbers, as well as how to spell her own name.   It was necessary for a girl to learn how to stitch in order to mark linens, either her own or her employer's if she entered into domestic service.

The Hester Elting sampler is wrought in blue and red cotton thread on homespun linen and is 7" x 10 1/2" in size. Secured to the top edge is a sample alphabet of letters A through E, on finer linen (perhaps imported from Europe) and probably made by Hester's teacher, attached as a guide for her work. Hester stitched the alphabet in both upper and lower case letters and included numbers one through ten. She added rows of decorative border stitches to separate the bands and signed it "Hester Elting in the 10 year of life," which dates the sampler to c. 1808.

Hester Elting was born on November 8, 1798, in New Paltz, New York, the daughter of Johannes Elting and Jannetje Wurts. Although the Elting family was not one of the twelve original founding families of New Paltz, the family acted as an economic and social cornerstone of the community. The great-great grandfather of Hester’s father Johannes was Jan Elting, who immigrated from the Netherlands in 1657 to Long Island; the family later settled in Hurley, New York, just across the river from the future New Paltz settlement. Jan witnessed the purchase of New Paltz land from the Lenape Native Americans in 1677. In the early eighteenth century, Jan's eldest son Roelif moved to New Paltz, and married Sarah, daughter of Abraham DuBois, one of the original patentees of the settlement. Hester's mother, Jannetije Wurts, the daughter of Dr. George Wurts, the first resident doctor in New Paltz, and Esther Hasbrouck; Esther was the great-granddaughter of Jean Hasbrouck, another of the original New Paltz patentees.

It is uncertain what type of education was available in New Paltz prior to the founding of the first district school in 1812. At that time, most children children were taught to read at home in order to read the Bible.   Once a child could read, boys and girls often attended classes in the home of a woman in the neighborhood; these schools became known as "Dame Schools." Hester's second cousin Rebecca, nine years older, established a "Select School" for girls on 111 Huguenot Street in 1840, which continued until 1853. Hester may have attended such a school when she stitched her sampler in 1808, but since the sampler is quite basic, she most likely completed her sampler under the tutelage of her own mother or another relative.

The embroidery sampler has a long history in Europe.   The earliest dated sampler is housed in the Victoria & Albert Museum in England with the date of 1598, but references in literature occur even earlier.   Originally a sampler was long and narrow, and contained a variety of stitches and motifs which could be used for future embroidery work. These pieces were stitched by experienced needleworkers, rolled up and kept in a sewing basket for reference. An example of such a sampler wrought by Loara Standish, daughter of Mayflower passenger Myles Standish, is located in the Pilgrim Hall Museum of Plymouth, Massachusetts. The sampler is dated c. 1653 when Loara was age 21.

With the arrival of the printing press, stitching patterns became readily available and the function of the sampler gradually changed. Education for boys and girls differed in early America. After learning to read, boys would be taught to write, a skill called “penmanship,” followed by arithmetic, to be used in the professions and trade. Girls, however, had no need to learn those skills and were instead taught to read and sew.   Reading was taught orally; it was not necessary to be able to write in order to read. The Hester Elting sampler is an example of the new function of needlework: a young girl would be taught her alphabet and numbers by way of embroidery, learning to stitch at the same time. Since household linens were precious, a wife would “mark” them with initials and numbers so that each item was identifiable and could be rotated for even wear. This skill was also taught to girls for use in domestic service employment.

Hester Elting Deyo had only one child, Mauritius Deyo.   Mauritius Deyo was married to Mary Jane Winfield. They had four sons as of the 1875 New York State Census, and resided in Hyde Park, New York.   The rudimentary homespun sampler stitched by nine-year-old Hester Elting in 1808 was significant enough to be saved and passed down through the generations.   The sampler was passed from Mauritius, to his son Ernest, to his son Alfred, to his son John Winfield Deyo. In 1989, the piece was donated to the collection of Historic Huguenot Street by John Winfield Deyo, along with many other documents from family archives.   Portraits of Mauritius Deyo and Mary Jane Winfield Deyo currently hang in the "Deyo House" on Huguenot Street.