Venerable Veneer: The Bronze Door Knob and Escutcheon on the Deyo House 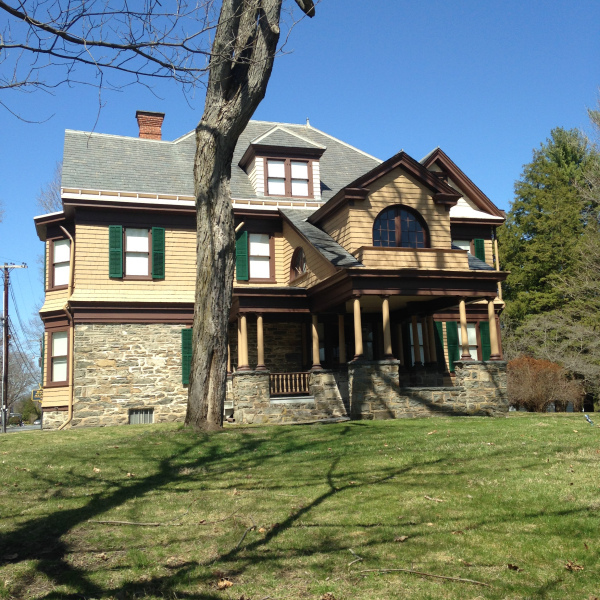 On February 27, 1895, Abraham and Gertrude Deyo-Brodhead opened the doors of their newly renovated home, “fitted up in the most elegant manner,” to “a large company who had come to pay their respects” (“At Home”). With their rococo design and burnished gold finish, the bronze door knob and escutcheon which grace the front door of the Deyo House are the first of many elegant fittings meant to impress visitors. Yet, their highly ornamental nature hints at the economic and cultural impact of the Industrial Revolution on the New Paltz community as well as one family’s fall from fortune. 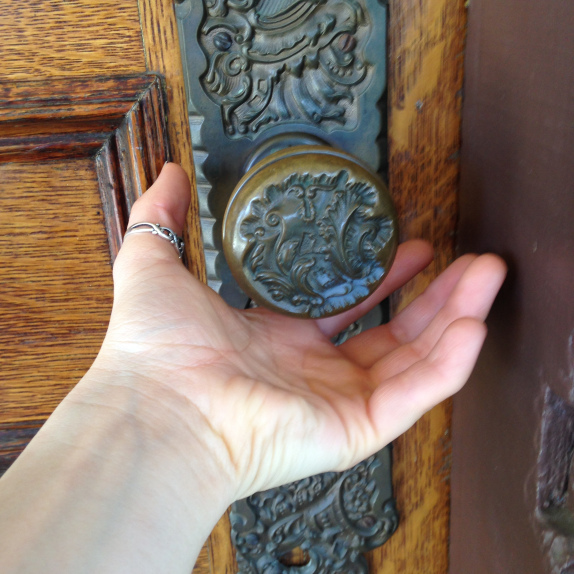 Both the knob and the escutcheon have an elaborate floral pattern cast on the surface, giving the set an eye-catchingly elegant (or ostentatious, depending on one’s tastes) air. The escutcheon is especially attention-grabbing. Measuring sixteen by three inches, it is a roughly rectangular shape. However, the top and bottom have been molded into the form of acanthus leaves, creating an asymmetry that draws the eyes away from the relatively simple wood door to the more impressive hardware. Although the bronze has become dull and tinged with verdigris, one can imagine that its original burnished gold color would have made the set even more beautiful to those coming to greet the Deyo-Brodheads as they settled back in, particularly when it was lit by the house’s recently installed electrical lighting, a feature that would have been something of a luxury at the time.

The set was manufactured in the late 1800s by the Reading Hardware Company, located in Reading, Pennsylvania. According to Morton L. Montgomery’s history on the area, the company, founded in 1852, specialized in “furnishing all the necessary hardware in the construction of large hotels and office buildings” in large cities such as New York and Chicago. They were particularly well known for their: “unique and artistic designs in fine bronze” (Montgomery 189). The design found on the Deyo house knob and escutcheon, is a rococo style called Belfort, and was available for purchase through the company’s widely circulated Illustrated Catalogue of Fine Locks and Builders’ Hardware. It is likely that the Deyo-Brodhead’s selected the door knob and escutcheon from this catalogue as they planned their renovations. The set has remained on the front door ever since, and has survived three families in the house. The last owner, Harold L. Wood, sold the house to the present owner, the Huguenot Historical Society, in 1972. 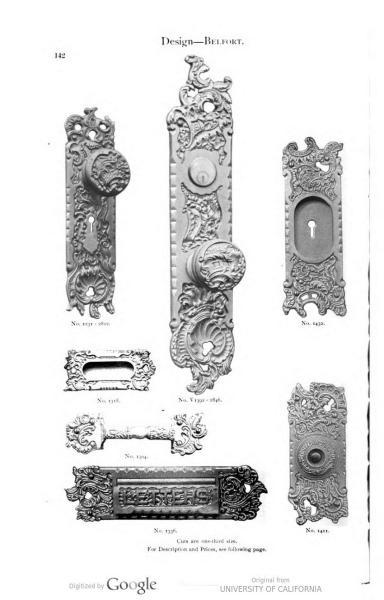 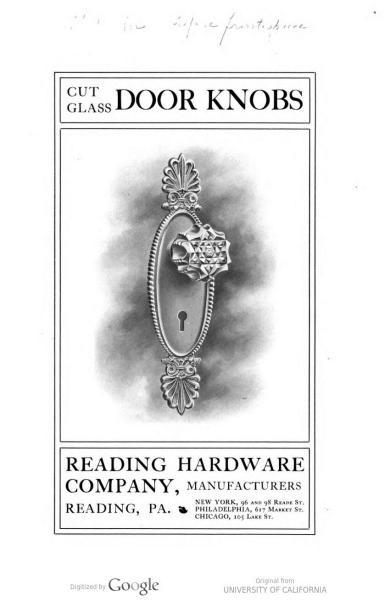 The knob and escutcheon embody a much larger struggle in terms of the culture and economy in New Paltz at the turn of the century, a struggle that comes to a head in the 1895 renovation of the Deyo house. Built by Pierre Deyo around 1692, the original Deyo house was a modest stone structure not unlike the neighboring Bevier-Elting house. While later descendants added a wing to accommodate the growing family, the exterior of the house otherwise remained relatively the same. This changed when the Deyo-Brodheads inherited the house in 1893. Although indubitably proud of their Huguenot heritage (both could trace their lineage back to Christian Deyo, patriarch of the Deyo family and one of the twelve signers of the original patent), Abraham and Gertrude nonetheless desired a much more ornate space than the stone house built by their ancestors. As Jaquetta Haley notes in her summary of Deyo House history, the couple was highly involved in New Paltz social life, at one point even hosting a masked ball for a group of notable local figures (8). Their decision to modify and expand the house seems motivated partially by their desire “to entertain on a grander scale” (8).

Yet, Haley implies that the couple’s social ambitions may have been curbed had it not been for a modest inheritance bequeathed by a wealthy relative. Although they owned a significant amount of land in New Paltz area, the Deyo-Broadheads were not a particularly wealthy family. Instead, their social prominence was tied to the family’s deep roots in the area as well as the Deyos’ long standing participation in community leadership, starting with Christian Deyo and extending on through Abraham’s great grandfather (a judge) and grandfather (a local sheriff). However, in 1890, the death of one of Abraham’s paternal great uncles left the newly wed Abraham and Gertrude with $150,000 (Haley 7). This inheritance allowed the couple to pursue their interests on a much larger scale than they had previously. For Abraham, this meant investing in the construction of a small horse racing track, the Brodhead Driving Park. Built on some of Brodhead’s holdings on the other side of the Wallkill, the track helped to supplement the couple’s income as well as bolster their reputation in the community. Although it is less clear what Gertrude’s interest were, Haley indicates that she enjoyed her role as a “social doyenne of New Paltz” (17). It seems plausible, then, that in her drive to throw larger and more tasteful events, Gertrude would be the one to prompt the renovation of the old stone house into the elegantly fitted space that so impressed the reporter of the New Paltz Independent on that February night in 1895.

The acanthus leaves at the top and bottom of the escutcheon are beautifully molded, giving the otherwise rectangular shape a fluid appearance. Â  Â  Â  Picture Credit: Elise Bruce

Regardless of who proposed the renovations, the Deyo-Brodheads began making plans to modify the house almost immediately upon taking ownership, transforming it from a simple stone house to a Queen Anne Style manor. It is, in the words of Kenneth Hasbrouck, “an example of how a residence must submit to remodeling as the occupants acquire wealth” (Hasbrouck). Hasbrouck’s comment hints at the discomfort with which New Paltz residents met the Deyo-Brodhead’s plans to renovate. An article in the New Paltz Independent dated July 13, 1894 laments, “The changes in the building will make it scarcly [sic] recognizable” (NPI).   Indeed, the stone first floor is the only vestige of the original structure still visible. The same article argues that “at least of them [the old stone houses on Huguenot Street] should be set apart and strictly guarded from the march of modern improvement in order that future generations may know in what manner of houses their ancestors lived” (NPI).

The fear of “modern improvement” obscuring the historical character of New Paltz indicates the community’s fierce loyalty to their heritage, but it also suggests the conflict between traditional local values and the cosmopolitan trend towards the ornate, even theatrical, sensibilities amongst the area’s wealthy citizens. Almost every feature of the Deyo-Brodhead’s home is meant to inspire reverence and respect not only for the Deyo-Brodhead’s heritage but also the family’s more recent wealth and achievements. Positioned prominently on the front door, the bronze door knob and escutcheon affirm this prestige, reminding all visitors that this house belonged to influential individuals. Yet, the grandeur rests on a certain superficiality made possible in part by the relatively new ability to mass produce luxury items using machine labor. The result was seemingly elegant items that were relatively affordable, especially when bought in bulk. The advertisement in the Reading Hardware Company’s catalog notes that the Belfort knob and escutcheon could be purchased for around $3.90 (roughly $100 today) (RHC). While that might seem expensive for a door knob, it pales in comparison to the cost of purchasing a similar piece from a blacksmith.

However, what they might have saved by buying machine fabricated hardware, the Deyo-Brodheads spent or invested elsewhere, requiring them to eventually take out two mortgages on the property. A confluence of financial problems, starting with the collapse of the race track as a source of income, would eventually cause the couple to lose the house and their ancestral land holdings. Unlike most of their property, which was auctioned off to recoup the family’s losses, the grand door knob and escutcheon would remain with the estate, a silent testimony to their hopes and dreams as well as an embodiment of the changing times.