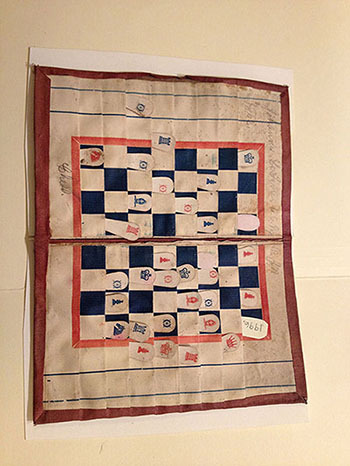 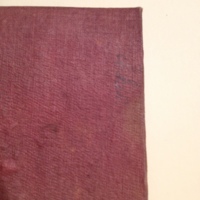 Smaller than your modern chess set, the pocket chess-board was a portable game for travelers to carry from one destination to the next. Because the object was created with a series of slips and paper chess pieces, it was easy to stop at any moment and close the book without disturbing the game.

The pocket chess-board, when closed, looks like a small hardcover book made out of cloth material. You can feel the roughness of the outside of the board as if you’re touching the cuff of a fresh pair of jeans. There are small air bubbles on the back cover where air trapped itself inside the cloth material over time. On the object’s edges, you can see pieces of the cloth are slowly starting to rip off and wear away. The chessboard is light brown, but was probably burgundy or red once upon a time, just inside this border, the word chess is written at the top left. Upon opening the small 4”-by-6” book, one finds a mini chess board located in the middle, with blue and white squares surrounded by a red-orange border. Below the border is the word "Chess" written in script again. Just above this, over the border reads: “Johannes Lefevre 126 reg. N.Y.R.” and “1862”. The chessboard is made out of paper with blue lines on the left and right side, creating little slips for small white tear-drop shaped chess pieces. On the pieces, there are printed chess shapes in red and blue ink. Some are in chess slots, others are to the side, waiting to be used.

The first record of pocket chess boards was in 1858, being sold by. The D. Appleton & Company (“Johannes Lefevre’s Civil war Pocket Chess-board…”). This game became a staple for travelers because of its small, portable size perfect for entertainment on long journeys. Peter Mark Roget, best known for his thesaurus, created the first pocket chessboard, perfect for soldiers, travelers and sailors who needed entertainment on the go (“[Chess]. Peter Mark Roget, designer.”) 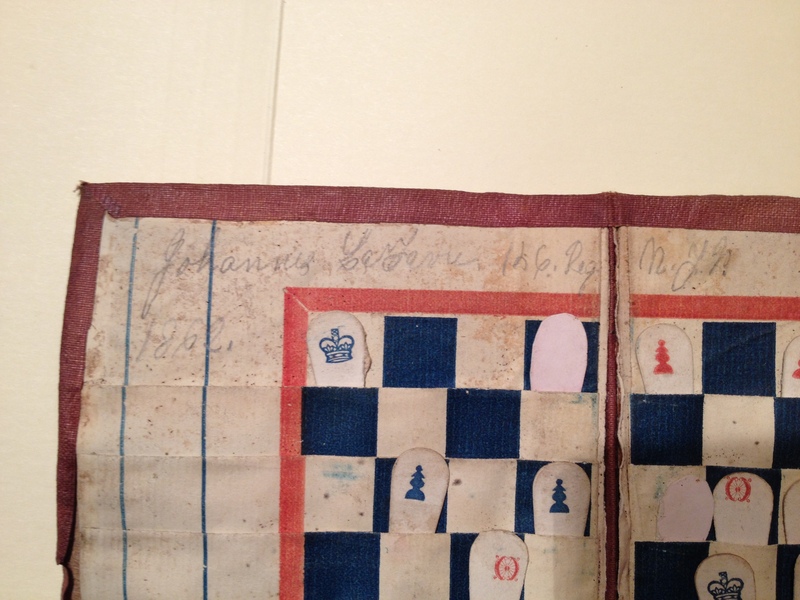 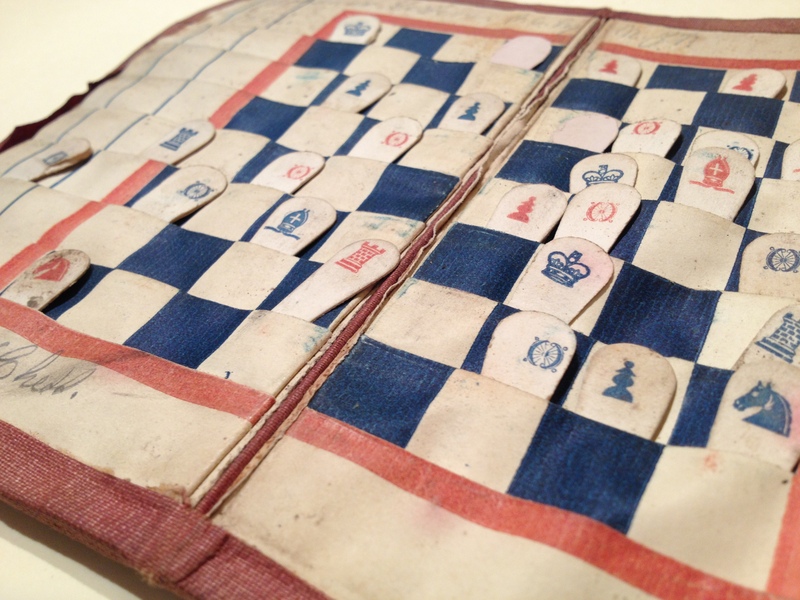 This object was owned by Civil War Soldier Johannes LeFevre of New Paltz. It is believed he carried the object with him during his time in the war. The object was perfect for the life of a soldier because of its portability and inability to disrupt the game. Though it is unclear how this game came into Lefevre’s possession, we do know the pocket chess-board was manufactured by D. Appleton & Company in New York City 13 years after its invention by Peter Mark Roget. After Lefevre’s death, it was passed down through generations before being donated to Historic Huguenot Street.

From his letter collection at Historic Huguenot Street, we know that   Johannes LeFevre, son of Josiah and Elizabeth LeFevre, entered the war in his early 20s after graduating from Union College with a degree in science. Lefevre got word that his brother was planning on joining the Union Army, so he quickly left Michigan and returned home to New Paltz, with the intent to enlist. He became a lieutenant of the 156th regiment of the N.Y. Volunteer Army. In his last days being home, he gathered a few items: some writing material for letters he’d send to his family, his weapons and uniform, and a pocket chessboard, a popular item for travelers.

It was not uncommon for a Civil War soldier to portable games like this. For LeFevre, he had his chessboard before the civil war. Because of his heavy traveling, he may have used the item as a form of entertainment to play friends and other travelers. If this wasn’t the case, LeFevre must have received the item as a gift or bought the item before his departure. This popular game gave soldiers a way to put their minds to other use while staying up long nights, guarding their forts. If areas were attacked, they closed the game at that moment without worry about the pieces moving or being lost.

There is no record that LeFevre wrote about his chess-board to his family and friends, but it is certain it was in his possession of it during his duty as a soldier. Throughout his journey in the Union Army, LeFevre picked up a pencil and wrote on the inside of the item: “Johannes LeFevre 126 reg. N.Y.R,” which is confusing because he enlisted in the 156 reg. It is possible that he may have moved within the military once enlisted.   He also wrote “1862â€³ on the left corner of the chess-board. He wrote “Chess” at the bottom of the page and on the cover of his pocket chess-board too. The life of a soldier is always moving; it was important to label items because of the spontaneous and fast paced environment of a soldier. Also, the chessboard's appearance is similar to a book. The writing avoids confusion.

Johannes LeFevre had a successful and emotional career in the military, as was depicted in his civil war letters about the hardships of war. LeFevre’s letters lead up to him being fatally wounded during the Battle of Cedar Creek where a bullet went into the side of his rear. He was then taken to a Dr. West who was helping him recover. His father, Josiah Lefevre, went south after receiving a letter from Dr. West about his son’s injury. Upon reaching him, Josiah realized his son was recovering and left for New Paltz. However, it wasn’t until his departure that LeFevre developed gangrene from the exposed wound. He died in the late fall of 1864 (West).

The chess-board was with all of LeFevre’s things when he died. His brother, Isaac, went down to get the body and return it to the family in a coffin, according to Huguenot Street researchers. His belongings, such as the chess-board, were passed down through relatives until it was finally donated to Historic Huguenot Street.

The item was kept because of significance. The pocket chess-board left with Lefevre and became part of his travels through battles and experiences in the Civil War. Because of the battle, many of his items are not recoverable and were left at the battle scene, but this item survived. The chessboard acted as a distraction and relief from violence as LeFevre traveled with the troops; this chessboard functioned also as a piece of home. Given its historical and emotional context, it is no wonder the family chose to donate the item to historians in New Paltz. The chess-board is now part of a larger Johannes LeFevre collection, which is split between Historic Huguenot Street and Elting Memorial Library.