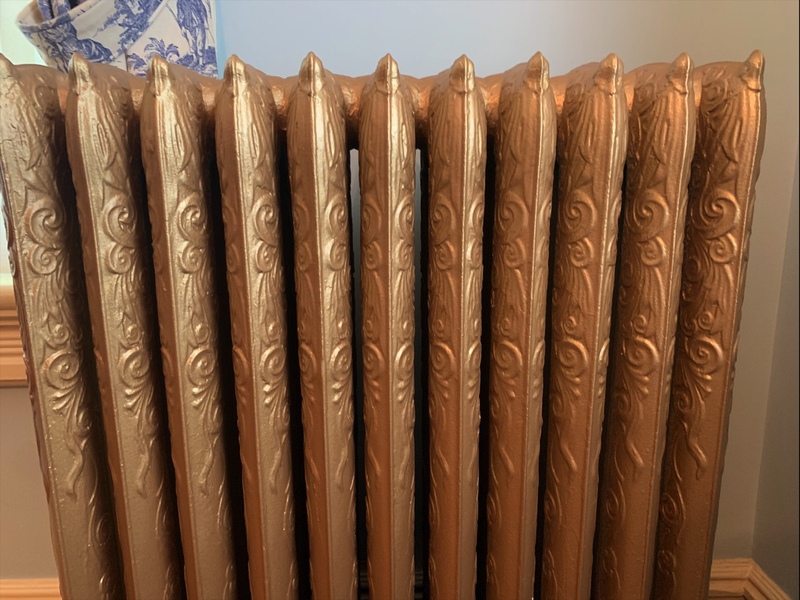 What is considered in today’s standards as a basic amenity, central heating in the late 19th and early 20th century was a luxury for Americans. Nestled underneath the two east windows in the Music Room of the Deyo House, the gold-painted Rococo cast-iron hot water radiators – manufactured in 1894 by the American Radiator Company in Detroit, Michigan, and subsequently sold to the Hasbrouck and Weismiller Store, a local 19th century heating and plumbing business, formerly located at 101 Main Street, New Paltz, New York – served one integral function for the Broadhead and LeFevre families: showcasing affluence for guests. 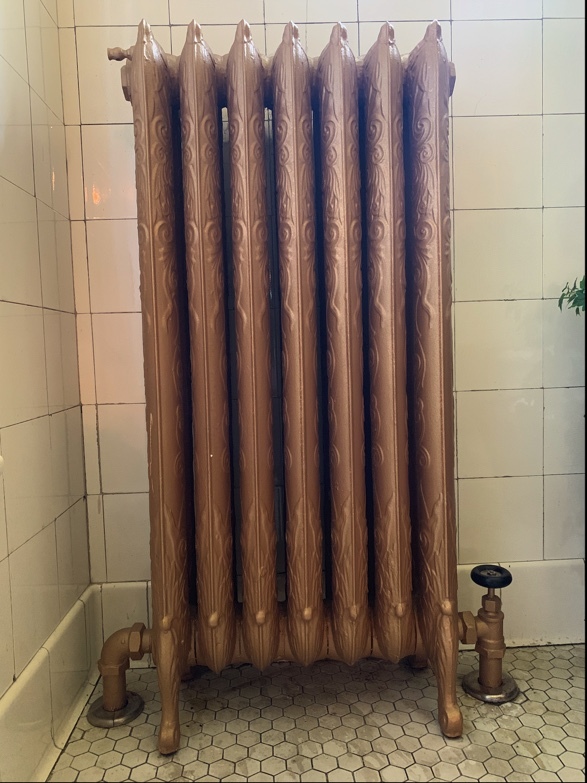 Figure 2: A set of Rococo radiators located inside the second floor bathroom of the Deyo House. (Picture credit: Claire Dawkins) 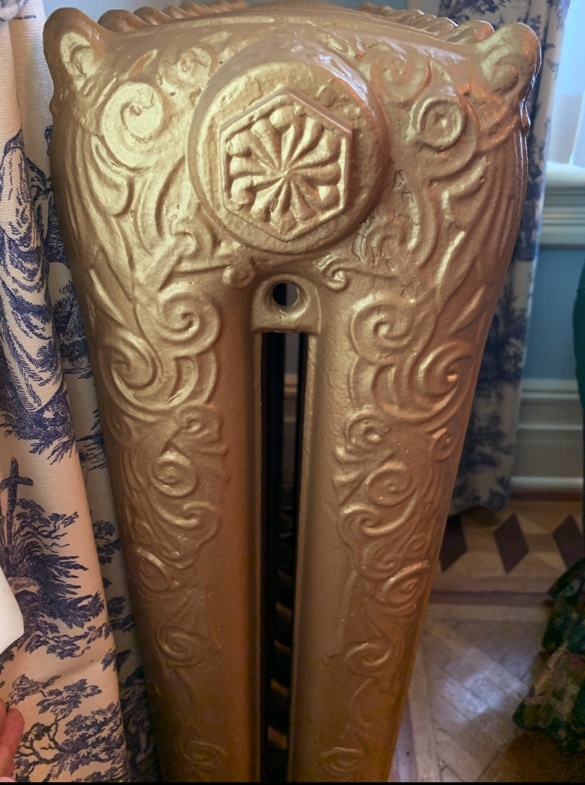 The gold-painted radiators are located all around the Deyo’s home. These cast iron heaters are in the music room, the bathrooms and many more. These radiators vary in size, but they all have the same gold finish. These radiators have intricate flowering details on their sides. They are raised so that you can feel them while running your fingers up and down the designs. The largest models are inside the Music Room of the Deyo House, the room immediately to the right from the front door. The Music Room is “heated by two ornate cast iron hot water radiators (3’-6” wide by 1’-10 ½” high) located in front of the two east windows” (The Huguenot Historical 55). For each set, there are seventeen individual sections, and each section measures at 2.5” wide by 1’-10 1/2” high, with the capability of housing a half-gallon of water. The radiators in the bathroom are considerably smaller, in order to heat these smaller rooms.  Displayed in Figure 2 is a set of gold-painted radiators in the second-floor bathroom.

In an attempt by the Broadhead and the LeFevre families to display their opulence, all the cast iron hot water radiators in the Deyo House were coated with a layer of gold paint. According to an article published by the United States General Services Administration, the technique employed to paint cast iron hot water radiators in the late 19th and early 20th centuries is called bronzing (1). The required materials for bronzing consist of “bronzing liquid and bronzing powder to achieve a metallic surface appearance” (Refinishing a Radiator 1). While the exterior of the radiators may have been aesthetically pleasing and demonstrated affluence and sophisticated technology, the one major caveat with bronzing radiators is that the composition of the paint contains lead, a toxic chemical now known to wreak havoc on the brain and central nervous system.

According to the Historic Resource Study of the Vanderbilt Mansion located in Hyde Park, New York, “by the 1880s, manufacturers could easily cast metals into the decorative design and so radiators abounded with scrolls and other cast decorative elements” (215). In other words, the radiators inside the Vanderbilt Mansion, an estate owned by one of the wealthiest families in the United States of America at the time, and the Deyo House followed a standard, late 19th-century design.

When analyzing objects from the 19th century, I usually think of objects strictly for affluent families: automobiles, phonographs, telephones, or cameras. I never would have considered a 19th century heating system inside a former Dutch style stone house as an object of any significance. This is because amenities such as central heating, running water, and refrigeration have been fully integrated into modern life in the United States, where people no longer notice the essential role these utilities fulfill every day. Throughout my extensive research in the Historic Huguenot Street collaborative project, I have developed a fundamental understanding of how the gold painted Rococo cast-iron hot water radiators inside the Deyo House served one integral function in the late 19th and early 20th centuries: displaying a family’s opulence for guests.

Originally constructed in the 17th century, the Deyo House was a Dutch style stone house consisting of one story. Over the course of 200 years, five generations of the Deyo family would live in this house before it received its first renovation (The Huguenot Historical 7). Displayed in Figure 4 is a photograph of the Deyo House in the late 19th century, before the first renovation. 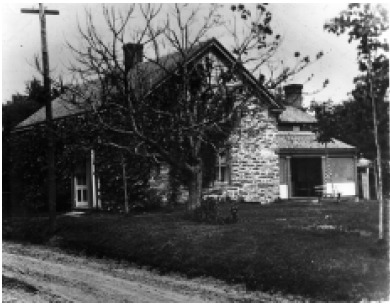 Figure 4: The Deyo House in the late 19th century (The Huguenot Historical 7). 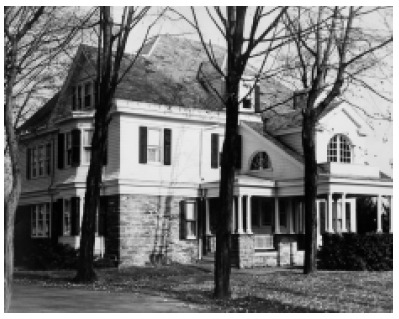 Figure 5: The Deyo House after the 1894 renovation (The Huguenot Historical 11).

In 1889, Abraham Deyo Brodhead acquired the property; shortly after in 1894, he authorized the first wave of significant changes to his ancestor’s home (The Huguenot Historical 7). As shown in Figure 5 is the Deyo House after the 1894 renovation.

The notable additions to the Deyo House included electric lighting and a central heating system. While these changes were significant for the time, when the Deyo House was sold to Frank J. LeFevre on November 3rd, 1915, the LeFevre family immediately began the house’s second renovation, purchasing “a new heater and a number of new radiators” (New Paltz Independent). All the gold-painted radiators currently inside the Deyo House are from the 1894 and 1915 renovations.

While analyzing the Rococo cast iron hot water radiators inside the Music Room, I noticed the words AMERICAN RADIATOR COMPANY were inscribed on each section. Displayed in Figure 6 is an image of the inscription. 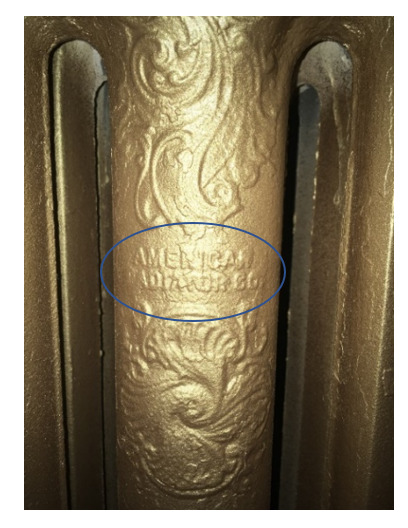 Figure 6: One of the Rococo cast iron hot water radiators with AMERICAN RADIATOR COMPANY inscribed on the side.

The American Radiator Company throughout the late 19th and early 20th centuries forged business partnerships with local distributors and small businesses across the United States of America. An example of this would be the cooperation between the American Radiator Company and the Hasbrouck and Weismiller Store – a local 19th century heating and plumbing business, formerly located at 101 Main Street, New Paltz, New York (Johnson 79). According to an advertisement published on May 23rd of 1903 in the New Paltz Independent, the Hasbrouck and Weismiller Store was trying to notify the residents of New Paltz about the new heating technology they were selling. Attached in Figure 7 is the advertisement from the New Paltz Independent. 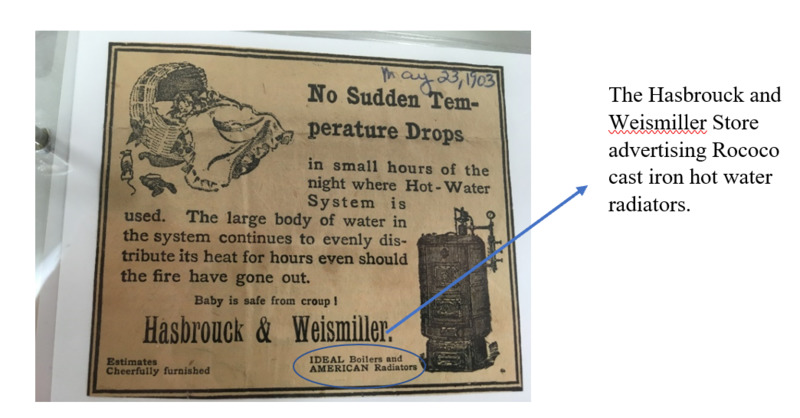 Figure 7: A Hasbrouck and Weismiller Store advertisement in the New Paltz Independent.

Even though there are no financial records from the 1894 and 1915 renovations of the Deyo House, it is likely that Abraham Deyo Broadhead and Frank J. Lefevre supported a local family owned business by purchasing the Rococo radiators from the Hasbrouck and Weismiller Store. While there is no documentation of the price the Hasbrouck and Weismiller Store was selling the Rococo radiators, a Sears, Roebuck catalog from 1910 offers some insight as to how much the Broadhead and LeFevre families paid. Attached in Figure 8 is a page from the Sears, Roebuck catalog, in their heating section.

Based in Chicago, Illinois, the American Heating Company designed and manufactured the AMCE radiators shown for sale in Figure 8. In the late 19th and early 20th century, the American Heating Company was the American Radiator Company’s rival in the heating industry (Burton 598). While the prices of the American Radiator Company radiators are not advertised in the Sears, Roebuck catalog, analyzing their competitor’s prices for a very similar product offers some insight as to how much the Broadhead and LeFevre families paid. Based on the dimensions of the Rococo radiators inside the Music Room of the Deyo House – 3’-6” wide by 1’-10 ½” high – they would correspond to the 20-Inch Height column, as shown in Figure 8. For each cast iron hot water radiator inside the Music Room, there are 17 sections, so with a little math, the total theoretical price for the 17 sections in 1910 would be $4.68 (STEAM AND HOT 99).

However, these are not the only radiators inside the Deyo House. Accounting for all 123 sections purchased during both renovations, the total theoretical cost for the entire package of Rococo cast iron hot water radiators in 1910 would be $33.83 (STEAM AND HOT  99). In the late 19thand early 20th century, this was a significant amount of money to invest in a household utility. According to officialdata.org, $33.83 in 1915 is equivalent to $851.45 in 2019 (1). 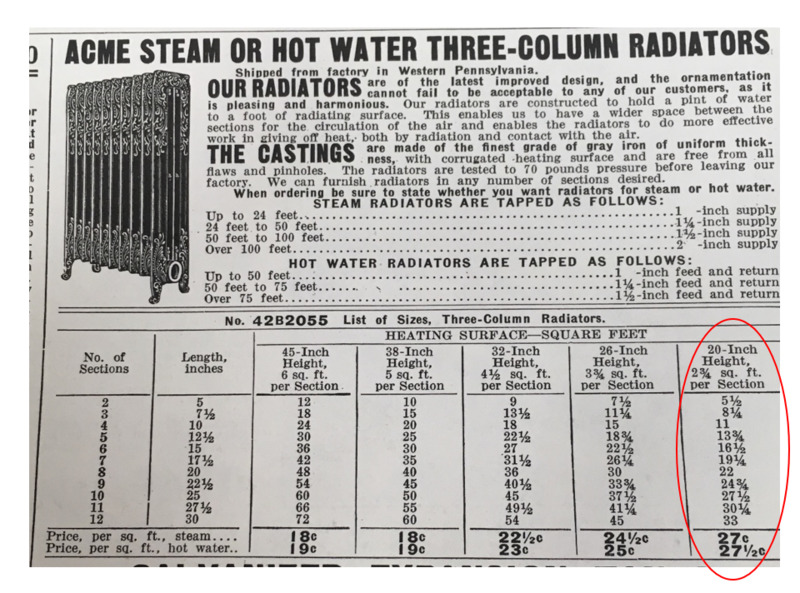 The late 19th century was a transformative era in the United States of America, where mass industrialization and exponential technological growth gave rise to the materialism and consumer culture of the 20th century. Innovations such as electric lighting, automobile manufacturing, camera design, audio recording, and central heating systems were developed. Like most first iterations of a consumer product, these material items were very expensive, where only affluent families could even consider purchasing these products. The Broadhead, LeFevre, and Vanderbilt families, through their rapid spending on luxurious, non-essential technology, are early examples of Americans immersing themselves in material culture.

In stark contrast to most Americans in the late 19th century, the Broadhead, LeFevre, and Vanderbilt families enjoyed the luxury of owning a low maintenance central heating system. The rationale, however, behind purchasing gold painted radiators was significantly different for each family. For example, the primary reason Abraham Deyo Broadhead and Frank J. LeFevre purchased gold painted radiators for the Deyo House was to display their affluence. During the 1894 and 1915 renovations, the Broadhead and LeFevre families were attempting to emulate the lifestyle of the Vanderbilt’s, but since neither family accumulated as much wealth as the Vanderbilt family, the Broadhead and LeFevre families had to express their wealth through other means. One method the Broadhead and LeFevre families employed was installing decorative, gold painted radiators. When the Vanderbilt’s purchased their radiators in the late 19th century, they deemed it “unnecessary… to purchase fancy radiators [from the American Radiator Company] because they [the radiators] appeared only in the service areas” (Albee 215). Even though the Vanderbilt’s cared about displaying their wealth, as shown by their luxurious 211-acre summer home in Hyde Park, New York, they did not care about expressing their wealth through smaller material items.

In addition to emulating the Vanderbilt’s lifestyle, the Broadhead and LeFevre families, through the purchase and installation of golden radiators, wanted to impress wealthy families in the local Hudson Valley. An example of this would be the countless events the Broadhead and LeFevre families hosted at the Deyo House. Articles published on March 1st and March 6th of 1895 in the New Paltz Independent discussed an event the Broadhead family hosted on February 27th, 1895, where high profile families from the neighboring towns of Kingston and Newburgh attended. According to these articles, significant emphasis was placed on the electric lighting and the Rococo gold painted radiators in the Deyo House (New Paltz Independent). In stark contrast to the high maintenance heating system most Americans owned at the time – a coal burning oven or a fireplace – the Broadhead family wanted to communicate a message to their local community of their vast collection of wealth.

When analyzing this period of American history, it is important to understand how material culture influenced regions such as the Hudson Valley. After nearly 200 years of Deyo’s living in a one-story Dutch style stone house, Abraham Deyo Broadhead authorized in 1894 a complete transformation of the Deyo House. The final product left the house unrecognizable, as seen in Figure 4 and Figure 5, and equipped with, at the time, sophisticated technology – electric lighting and a central heating system. While the gold painted radiators did fulfill a function in providing heat in an efficient, low maintenance manner, their intended purpose was to showcase the wealth of the Broadhead and LeFevre families. In contrast, the Vanderbilt’s focused on the practical application of a central heating system, rather than focusing on the optics of owning state-of-the-art technology. The Huguenot Historical Society and the National Park Service have preserved these objects so they can serve as a reminder to people of the consumer culture of the late 19th and early 20th century. I firmly believe that the preservation of these radiators inside the Deyo House has contributed immensely to the rich history of New Paltz.

"Hasbrouck and Weismiller Store, No Sudden Temperature Drops as." New Paltz Independent, 23 May 1903.