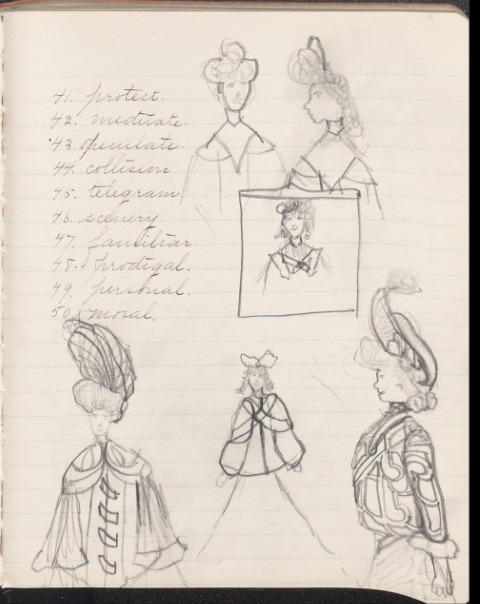 This book features schoolwork by two students that graduated from the New Paltz Normal School, but the contents do not feature New Paltz Normal material. Jane Hayden planned examinations from a variety of disciplines for her students from October 1896 to April 1897. The later inheritor, Gertrude Dubois, sketched contemporary clothing designs, architectural illustrations and drafted essays, alongside her predecessor’s examination questions.

At first glance, the thin composition book, approximately 10 x 7.5 inches, hardly stands out as an artifact of New Paltz history. Barely threaded together within brown cardboard covers, the pages have yellowed over time, yet the horizontal blue lines reminiscent of today’s marble notebooks are visible on each piece of paper. Inside the front cover, “Jane Hayden” is written clearly in pencil to indicate ownership; a scrawled script in the top right hand corner on the adjacent lined paper can be faintly decoded as “Janie Hayden,” though it looks like someone smudged the pencil marking or attempted to erase the name. Below, “Examinations Oct. 1896” heads the first page, followed by “7 Arithmetic” and questions in a fine script. Other pages are headed by the following subjects: literature, grammar, geography, spelling, language, and physiology. Some of the questions are followed by answers, indicated by “Ans.” As the pages progress, thick pencil drawings of elaborately-dressed women and foreign architecture fill the blank spaces alongside examination questions and even some blank pages. On the final page, Gertrude Dubois wrote a fifth-grade History essay about Cyrus and Croesus in 1904, almost a decade after the previous owner dated her last page at April 9, 1897. 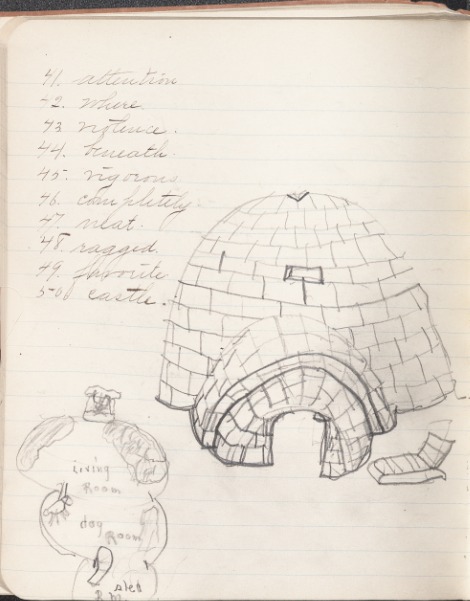 Jane Hayden and Gertrude Dubois, the two names found in the composition book, were daughters of Catherine Emily Deyo from different marriages; John Hayden fathered Jane (July 18, 1873) and her older brother James while Phillip E. Dubois fathered Gertrude (Sept. 21, 1893) (See family tree, below). Jane graduated from the Classical program at New Paltz Normal School in 1894 and her notes suggest that the book was used to prepare examination for students, perhaps in seventh and eighth grade. In 1904, her half-sister Gertrude stumbled upon the book and used it for her drawings and bits of schoolwork. Gertrude moved to Ft. Lauderdale with husband Watson Eltinge Jr. between her high school graduation (1912) and the birth of her daughter Bernice (1922) (US Census 1930). There remains no record on how the book ended up in the SUNY New Paltz Special Collections.

The physical book itself has no indication of where and when it was created. The date of the text within, however, is well-marked. The first writing sample is dated Oct. 1896. A few pages later, the “Final Examinations of the Fall Term” offer the final date of the exam period: December 24th, 1896. The Winter Term kicks off on February 19, 1897. Next, the final examinations of the Winter Term are dated as April 9, 1897. Finally, Gertrude writes her short History response on January 24, 1904.

The object is a unique historical document of the New Paltz Normal School. Between 1986 and 1917, no yearbooks exist for the institution, and while graduation lists and select school events were documented in local magazines, a very thin trace exists of the institution or surrounding academia during this time period. The exam book offers a glimpse into New Paltz academics during these undocumented years. In the same way, the composition book views the effect of the higher education institution rather than the school itself. Jane Hayden, the first author, graduated from the Classical course at New Paltz Normal in 1894 as the secretary for her class; the first date in the exam book is 1896. One could argue that the notes indicated future academic study at New Paltz Normal or elsewhere; after all, a Classical degree does not come with an education certification like the Normal course. 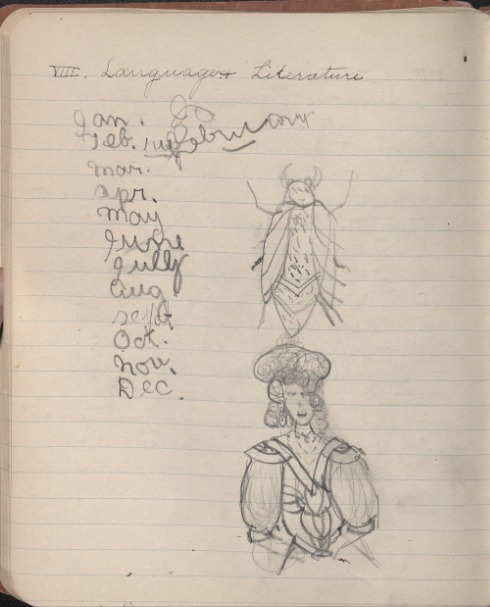 A doodle of a house and class notes. (photo credit: Jamie Burns) 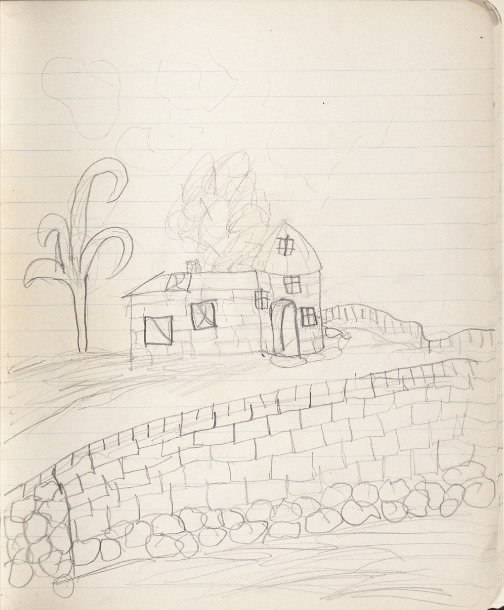 However, some of the headings do not match the subject programs offered through the Normal course (i.e. Geography and Spelling), and many of the Normal classes do not exist in the book (such as Zoology and Ethics). Also, no record exists of Jane Hayden, or Jane Minnick (her married name), graduating from the institution, either in newspaper clippings or the Paltzanga. Plus, the small number notations alongside subjects seem to indicate that she instructed seventh and eighth grade. However, the New Paltz public school system at the time stopped instruction at sixth grade. Students had to attend private institutions in Poughkeepsie and other surrounding areas to continue their education. As such, no record exists at local collections on Jane Hayden’s teaching career. We only have the book to faintly hint at what instructional material would be offered at the end of the nineteenth century. 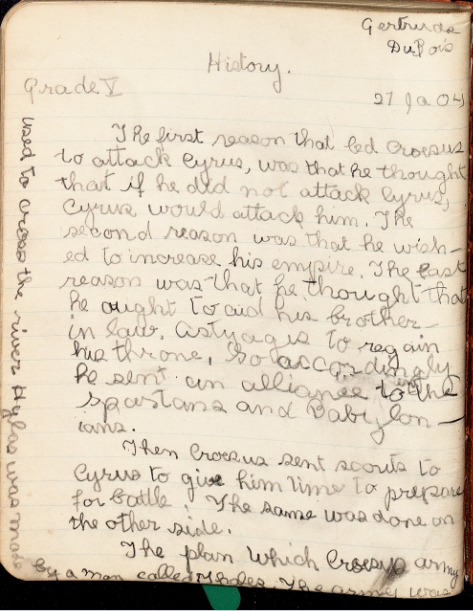 Gertrude’s notes and sketches, on the other hand, offer a glimpse into the educational prowess and social interests of a ten-year-old New Paltz girl. At the back of the book, Gertrude writes her brief essay in a loose, messy script, and a similarly messy grammar and argumentative style follow suit down the page. One could presume the essay was a rough draft, since text follows up along the side, the page appears on the very back cover, she flips over the book to write a few more notes, and no grade is indicated. This information could excuse her poor word choice and minimal detail, but what else can you expect for a fifth grader learning about Ancient Greeks and Persians? We can see that Gertrude admired contemporary fashion and architecture much more than her history studies. Her half-sister’s composition notebook became her artistic playground, where she could illustrate eloquent society ladies with curled locks, adorned in large hair accessories and elaborates dresses. She also sketched various building designs harking from various eras and cultures, demonstrating that young New Paltz girls were exposed to foreign cultures and societies, either through school or travel. Gertrude even learned about igloos, and designed her own with three rooms: a living room in the back, a dog room in the middle, and a sled room in the front. Her love of fashion continues years later; in the Historic Huguenot collection, a letter between Gertrude and her cousin Sarah describes the New Paltz Normal School burning down in 1906 and her trip to Poughkeepsie with her parents. She draws a rough sketch of a coat on the same page as her still-coarse script.

Although her writing and drawing in the composition book presumably does not continue far after 1906, Gertrude Dubois would later make her appearance in the New Paltz Normal School scene. In New Paltz Revisited, a photograph captures her graduating class, including her future husband’s sister, Anna Eltinge. After graduating high school in 1912, she married Watson Elting and moved to Ft. Lauderdale Florida where she stayed until her death in 1982.

The names tied to the book establish the complex family histories in New Paltz. Throughout New Paltz academic records and graduation listings, historical surnames such as DuBois, Deyo, Eltinge, and Lefevre appear again and again. Nearly all of these names could be traced back to the Historic Huguenot founders, and even surnames unrelated to the original founders get pulled into these historic families. Although John Hayden (Jane's father) hailed from Illinois, Catherine's second marriage to Phillip D. Dubois pulled the non-native family into a complex web of relations. This family web already establishes Gertrude in the Eltinge genealogy before her marriage to Watson Eltinge Jr.. Familial webs are inconclusive up to Gertrude and hardly mention John Hayden; below is a rough genealogy sketch from Catherine Emily Deyo down to offer to numerous collections of New Paltz history. Current graphical genealogies found online do not touch upon Catherine Deyo and her descendents; the below diagram moves towards a more concrete lineal trace.