Family & Faith in a Chaotic and Changing World: The 1650 Jean Hasbrouck Family Bible 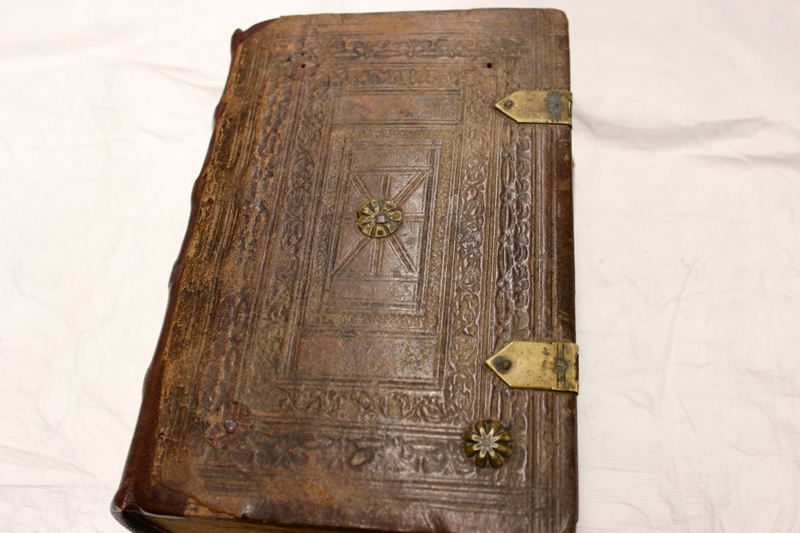 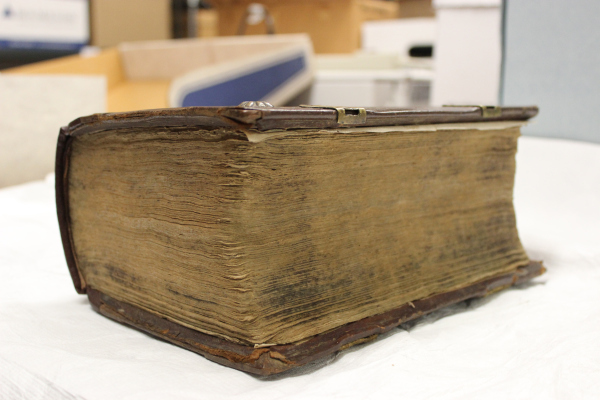 The Jean Hasbrouck Family Bible, dated 1650. This belonged to one of the original patentees of New Paltz, the leather bound French bible includes a listed genealogy of the Hasbrouck family and conveys the importance of religion to the French Huguenots who fled France from religious persecution. (Photo credit: Miriam Ward) 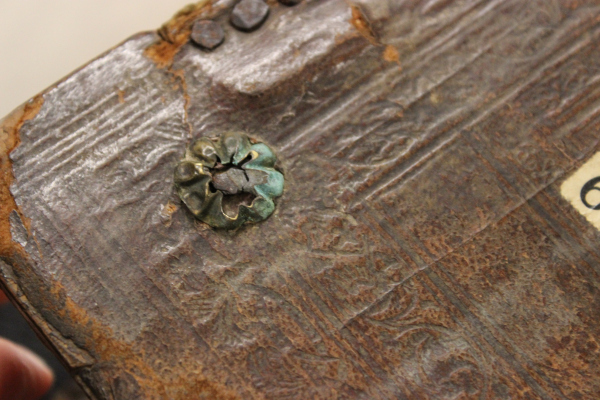 The Hasbrouck Family is synonymous with Historic Huguenot Street and with the French Huguenots. An object of great interest to the foundations of Historic Huguenot Street and one of its founding families is the Jean Hasbrouck Family Bible form 1650. This leather bound Bible is very large and ornate. With over 500 pages, the bible remains almost in entire original form. With some restoration work done, the bible has a new bounding done by the historical society that reads “ Jean Hasbrouck French Bible.”

The cover and back of the 1650 Bible show wear and tear, revealing a strong wooden interior bound over the leather. Also, the front and back reveal copper straps that would have held the locks for the book. The first 11 pages of the Jean Hasbrouck bible are missing, including the important copyright page. 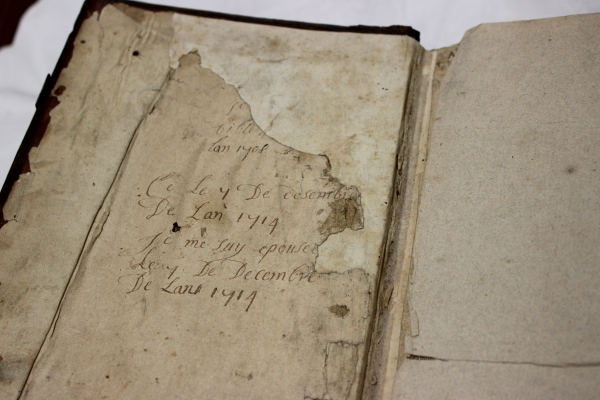 Interior of the Hasbrouck Bible, including a handwritten genealogy. (Photo credit: Miriam Ward)

The Jean Hasbrouck Family Bible holds a rich and telling history of both the Hasbrouck Family and the greater religious identity of the French Huguenots who settled in New Paltz, NY.   According to the Hasbrouck Family Website, the family name Hasbrouck is derived from a location, near the Ville d’Hazebrouck in Flanders (near Calais), France. The bible belonged to Jean Hasbrouck, one of the original patentees of New Paltz. His exact birth date is unknown, but family histories put it at around the 1630s-1640s, outside Calais in France.

Records show that Jean Hasbrouck died in 1714.   The history of the Hasbrouck Family comes to life when the bible is opened. Alongside the front cover and the back cover, lay hand written scripts detailing genealogy of the family. Unfortunately, many of these entries have given into deterioration and time, but many can be read. The eligible entries reveal to be the names of the children of Jean Hasbrouck and Anna Deyo. Their children were: Maria, Anne, Hester, Abraham, Isaac, Elizabeth and Jacob. Jean married Anna Deyo in in 1676 in Manheim, Germany.   Jean Hasbrouck, left France and ended up in Mannheim, Germany alongside many other refugees. The bible stayed in the Hasbrouck family for years but the exact donor is unknown to Historic Huguenot street, lost in time. 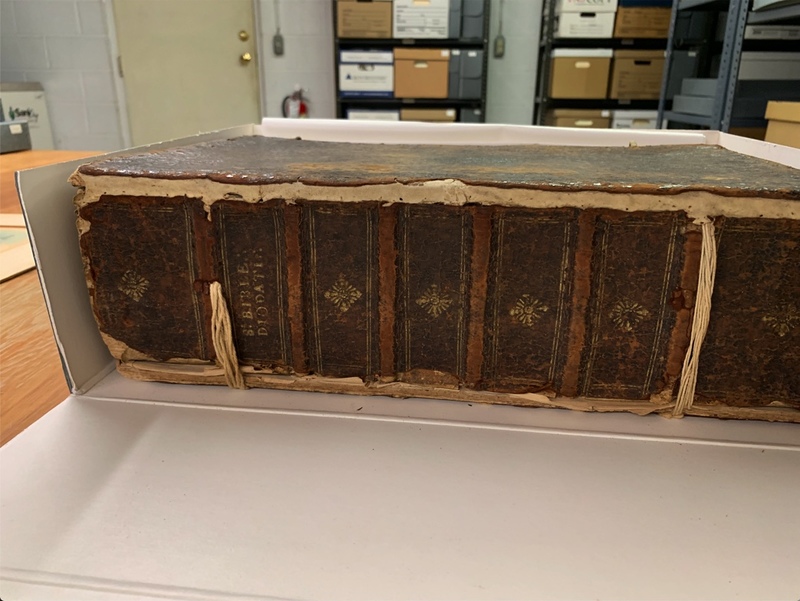 There are two more French bibles in the Historic Huguenot street’s collection which tell a different story about New Paltz. Both of these bibles were translated from Latin to French by, Jean Diodati in 1644. These massive bibles measure sixteen inches long, and ten inches wide, compared to the much more compact Jean Hasbrouck bibles which runs ten inches long and seven inches wide.   One of these bibles was owned by Jean Tebenin, who was a French Schoolmaster in New Paltz. In his will, he stated, “If the French Tongue should cease to be used in the Paltz, his bible was to be sold to the highest bidder and the proceeds go to the poor”(“History of Article”). This book was then purchased by the son of Jean Hasbrouck in 1730. This is significant because through the use of this bible we can track the use of French and Dutch in the region. Despite the dense population of Huguenot refugees in the area, the Dutch culture and language was stronger and overtook French in schools, religion, and social life. These bibles present different parts of New Paltz history.

The Jean Hasbrouck Family Bible is essential to the history of New Paltz. First of all, the bible reveals the incredible and rich religious history that New Paltz was founded on. The bible, surviving and in the hands of Historic Huguenot Street today, shines immense light and importance of religious ties to the identity of the French Huguenots.

According to a family history compiled by descendant Kenneth Hasbrouck, the protestant church in Marck France burned around 1640 and the protestant population was forced to flee. Many French Huguenots at this time, fled to Mannheim, Germany for protection. We can be fairly certain that Jean’s bible was made in France and it fled with him to Manheim, Germany.   Of the many objects to save and which to leave, the sheer fact that Jean saved this bible through such a tumultuous and changing time is very important. 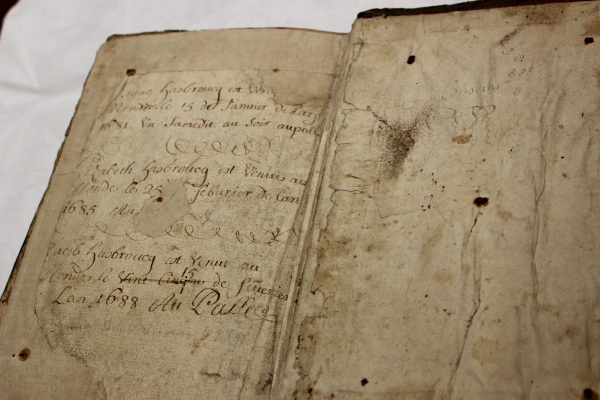 Being a French Protestant was central to Jean Hasbrouck’s identity, manifested in the family bible. On May 16th, 1672 Jean Hasbrouck and his wife Anna left Mannheim and sailed to Wiltwyck, New York in the Spring of 1673. In 1675, Abraham Hasbrouck sailed from Mannheim to Boston and ended up in New York to join his brother Jean and their small group of French Protestants. Jean and Abraham ended up becoming founding patentees of New Paltz, NY where they eventually settled. From a journey from Calais, France to Mannheim, Germany on a boat to New York Jean held onto his family bible. Jean and Anna had seven children that they raised in New Paltz, NY. The names of the children are written in beautiful script on the insides of the bible: Maria, Anne, Hester, Abraham, Isaac, Elizabeth and Jacob. In 1701, Jean Hasbrouck received permission from the Colony of England to “buy, sell, and trade lands, tenements, and hereditaments in this Kingdom…” The 1701 edict reveals Jean Hasbrouck’s involvement in the economy, locally and across the colony. Jean, as a founding patentee of New Paltz, was extremely involved in the community. Along with his brother Abraham Hasbrouck and Louis Bevier, he served as the founding commissioners of the early courts of New Paltz. Serving in the court as a commissioner, Jean Hasbrouck held a very high status in the town. 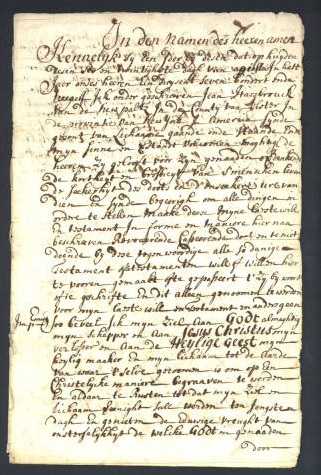 In 1712, Jean Hasbrouck died. His last will and testament survives and has been translated by Historic Huguenot Street. The will, written in Dutch, reveals that Jean and his family were fluent in both French and Dutch. The will conveys extremely devout and emotional language, showing the importance of faith to Jean Hasbrouck. Jean writes, “…so I commend my Soul To God almighty my Creator and To Jesus Christ my redeemer and To the Holy Ghost my sanctifier And my body to the Earth whence the same came from to be buried in A Christian fashion And rest there until my Soul and Body will be united upon the day of resurrection And receive the Eternal Bliss of salvation which God of his grace through the One merit of our savior has promised and prepared To all who have sincere and complete faith In him….” Jean Hasbrouck’s will of 1712 conveys how important and essential faith and religion were to his life. His bible reveals just that.

The Jean Hasbrouck Family Bible of 1650 conveys the centrality of faith to the life of the French Huguenots. In settling, and fostering, a community fleeing from religious persecution, Jean and his family were guided through faith.

Special thanks to Carrie Allmendinger of Historic Huguenot Street.