The Mystery of a Jesuit Cross 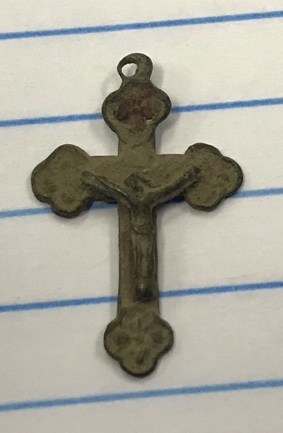 Front of Jesuit Cross in reference to a lined sheet of paper.

Jesuit crucifixes, rosaries, and religious rings have been found in archeological digs across the present-day American Northeast and Southern Canada. These artifacts track the presence of Jesuits in the area and reinforce already understood missionary patterns. By chance, a Jesuit Cross was found in a dig by a class of undergraduate students at SUNY New Paltz. New Paltz, New York, a town that is rich in French Huguenot history but not normally associated with the Jesuit mission.

Slightly off-center, there is a figure of crucified Jesus. Looking closely at the lines and contours of the figure’s body, you can trace the etching lines and divots of the metal which give the illusion of clothing and features. A border of excess metal runs under the arms and around the head of the figure. These details show us the imperfect process of making these crosses.

What can a simple cross, no larger than your thumb, tell you about local New Paltz History? Much can be revealed from studying this cross and noting the irregularities and craftsmanship that was required to make this piece. This copper cross has a dark green coating, which shows the age and wear of this piece of history. Copper is oxidized when it comes in contact with water. This cross has turned green not only from age but possibly from human touch. One of the most common ways we see this today is in cheap jewelry which can tint an earlobe or a finger green. This cross is small enough to fit comfortably in a pocket or as a necklace (as suggested by the small hole at the top of the cross).

The back of the cross has the word “souvenir” running vertically down the center, and “De la Mission” stamped horizontally across the arms. The inscription translated “Remember the Mission,” is worn away on the arms of the cross, but the letters closer to the middle of the cross are more clear. This inscription suggests that this cross may have been carried on a missionary journey, or that the cross was given to a new convert. The back sits comfortably in my palm and it lays almost perfectly flat against my hand.

The 16th and 17th centuries were a time of massive improvements and spread of information for metal production and craft. For the first time, information on metallurgy and assaying–the scientific study of metal and their chemical properties–was widely published to the public in a language they could understand. This made the quality and quantity of metal goods skyrocket across Europe and into the New World. This may have influenced the techniques and production of this cross (Singer).

Copper Alloys and many other non-precious metals were melted down in smaller furnaces compared to the much larger ones used for gold and silver. These metals were melted down then poured into a mold usually made of clay. The metal would then be left to settle and cool within the mold. Finally, the clay mold would be broken off and all that would remain is the metal figure or piece within (Singer 44). The structure of the crucified figure on the cross leads me to believe that this cross was molded in two pieces and then attached with more molten metal. The figure sits slightly off-center on the cross, and there is a visible edge which extends off his arms. This excess material, and the imperfect position of the crucified Jesus leads me to believe that this was not created in just one mold. 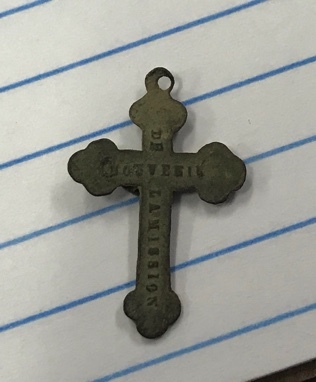 Back of the Cross, with the inscription "Souvenir de la Mission".

This cross reveals a more holistic view of life in New York state during the 17th century. Jesuits, mainly French, were stationed across what we now consider upstate New York. Their territory mostly consisted of an area named “New France” which extended from southeast Canada, and down the Mississippi river (Hughes). The Jesuit cross most likely never traveled the extent of the territory. The Jesuits were meticulous about keeping records of their movements and missionary work. In the Jesuit Relations and Allied Documents, missionaries wrote letters and reports back to Europe about the copper and silver mines they discovered on their lands. This obsession came from not only an economic need but also a religious one. The Allied Documents specifically note that missionaries used the copper deposits found in Lake Superior to create crucifixes to give to new converts (Kenton, xlv).

Now that there is an understanding of how the cross was made, how did it arrive in New Paltz? We must consider who Jesuit missionaries attempted to convert to Catholicism, and Native Americans were some of the most popular converts. This is important because one of their most documented tribes: the Seneca Native Americans lives just north of New Paltz, west of Albany. We have documented evidence that Jesuit missionaries gave crucifixes and rosaries to their new converts (Kenton, 453). There are a variety of ways this crucifix could have made its way into New Paltz. It is possible that through trade between tribes this cross came into New Paltz.

There is also evidence that this cross traveled either up or down the Hudson, connecting this artifact to Auriesville, New York, a Jesuit settlement 106 miles northwest of New Paltz (Schroth). This theory feels unlikely until you notice that Auriesville lies directly on the Mohawk River which spreads west from the Hudson. The placements of both these towns lead me to believe that this cross could have traveled with a Jesuit missionary coming from Auriesville, and stopping in, or passing by New Paltz; they could have given this cross to a convert or left it behind without realizing.

To understand the connections between a Jesuit Cross and a predominantly French Huguenot town we must look to more Jesuit settlements in the area. There was a Jesuit community just 20 minutes away from New Paltz by car in West Park. West Park is documented on Jesuit maps and reports as being an active community, but not until roughly 1840 (Hughes). The development of West Park is too late on our timeline for the cross, but it does provide more insight into how communities in New York moved and worked together. Who is to say that this 17th-century cross was not originally from somewhere else in New York then got transported to this Jesuit settlement only miles away from New Paltz, to then, by chance or by choice, end up buried in New Paltz soil. By looking at West Park we once again break down assumptions about New Paltz and the surrounding areas being dominated by French Huguenots. The diversity in life and religion in the area are demonstrated by Jesuit settlements only miles away from devote Huguenot settlements.

New York’s culture has always been culturally, ethnically and religiously diverse. When we look to settlements such as the French Huguenots in New Paltz, we see a religious and cultural minority entering a Dutch dominated area. This also extends to the Native American nations who were taken over and destroyed during the pillaging of colonization, these people add another variety of people into New Paltz history. But what happens when a Jesuit Cross is found in New Paltz? With no documented evidence of Jesuits in the region, this artifact reveals a new perspective of New York state and this region. How much more do we not know about the Jesuit movement and work in the New Paltz area? And what else can this cross tell us about larger conversion tactics and missionary work across New York State?

Hughes, Thomas. History of The Society of jesus in North America: Colonial and Federal. Vol.1 From the First Colonization Till 1645. Longmans, Green, and co. 1907.

Kenton, Edna. The Jesuit Relations and Allied Documents: Travel and exploration of the Jesuit Missionaries in North America (1610-1791), The Vanguard Press, 1954.

Singer, Charles E.J. Holmyard, A History of Technology: From the Renaissance to the Industrial Revolution c1500-c1750, Vol.III, Oxford, 1957.