A Teaspoon of Huguenot History 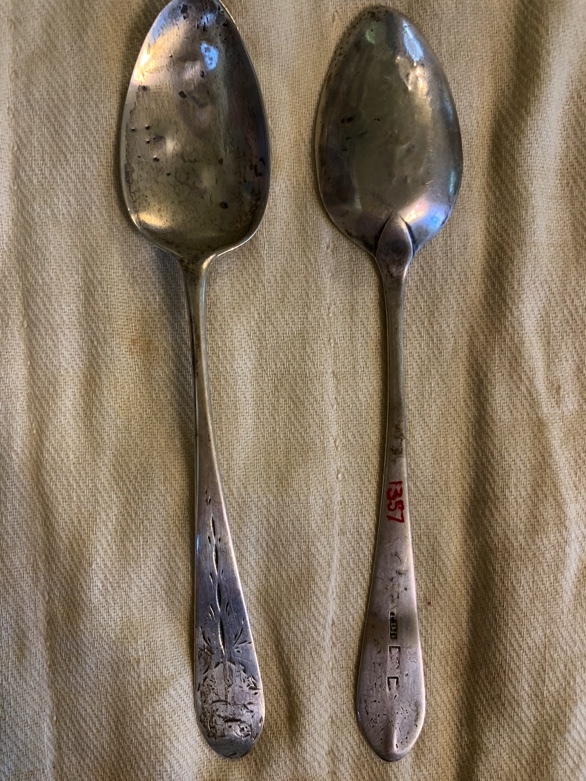 Late 18th century silver teaspoons crafted by Tunis DuBois, a skilled silversmith who defied the standards and took pride in his work, and his customers

The object that I’m analyzing is a pair of silver teaspoons made by Tunis D. DuBois, a descendant of the original Huguenot family. He was a silversmith based out of New York City. At first glance, this pair of teaspoons looks perfectly ordinary. But, the unique story of their use is seen in the worn and battered look of the handle and oval bowl of the spoon. These spoons were probably made for utilitarian purposes, but these little marks tell a deeper story. They reflect a time when our items were still custom-made, before mass production and manufacturing. The maker would leave little hints, traces, messages on their products—a proud symbol to accredit their work.

The teaspoons are made out of silver and are 5 and a half inches long. They have a pointed oval bowl and a pointed arch drop. The space between the spoon’s oval and its handle becomes very narrow, before opening back up into a straight oval handle. On the handle on the top of the spoon is a simple pattern, a few straight line indents made, one on top of the other, that get smaller as they move up the handle towards the narrow stem, with smaller indented lines coming off of the main ones. This pattern is reminiscent of a plant or flower, which relates to DuBois’ signature wheat sheaf. The teaspoons are not in perfect shape—but that’s the point. The bowl is worn and dented, and the silver is tarnished. However, these imperfections are what give these teaspoons character. They weren’t “perfectly” made by a machine in a factory. They required time and labor—they were touched, molded, and crafted by human hands. These teaspoons serve as an index—they contain an evidentiary quality that marks a trace of the real—the hands of the maker. DuBois left his signature on the back of the handle of the spoon with three rectangles. One with his initials, TDD, and two wheat sheafs in the other two rectangles. The wheat sheaf symbol typically represented harvest, fertility, and a long life. This was a popular motif to be used at the time (Laidlaw, 42). These marks can be seen on other works by DuBois. The teaspoons reflect a time when quality products were created with care and a unique touch. 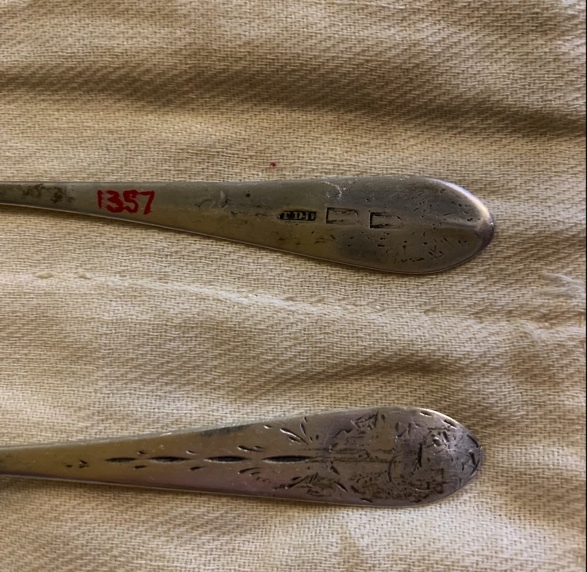 These teaspoons were donated by Muriel Pulver, a resident of Rhinebeck. She was born in 1897. Her mother was Magdalena Elting—part of the prominent Elting Family, important to New Paltz history. They weren’t one of the original 12 patentees, but their family intertwines with the founders, and “in almost any one of the original families one finds a connection with the Dutch Elting,” (Bevier-Elting Family Association). Magdalena was born in 1872 to Phillip and Harriet Hasbrouck Elting, and was a New York City native, before residing in Ulster County. This family donated a lot of items, so it can be surmised that they were collectors. The year range for these items is estimated between 1796 and 1799. (Historic Huguenot Street Permanent Collection). 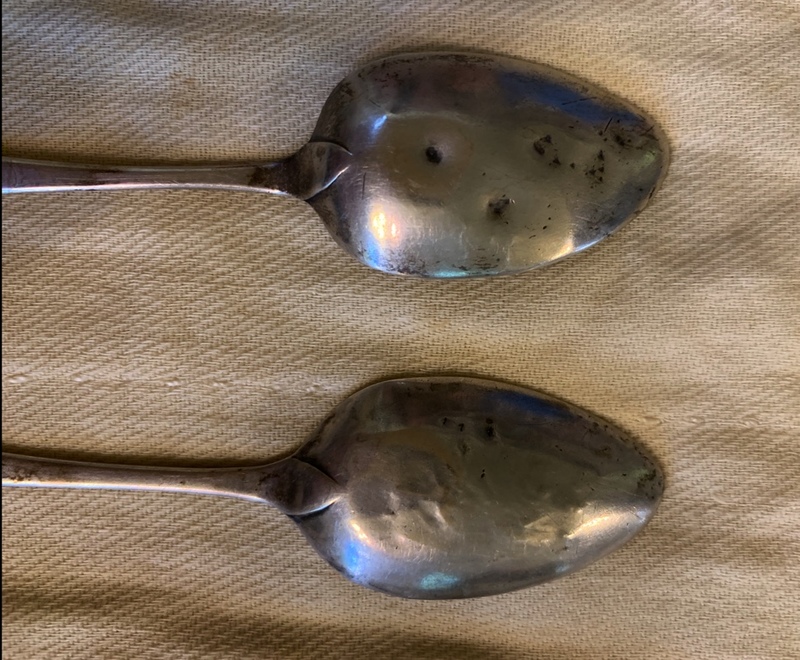 The back of both handcrafted spoons (photo credit: Claire Dawkins)

The Huguenots also found their way into other parts of Europe and America, where they established themselves as craftsmen as well. They were able to freely worship and carry out their skills as artisans. The Huguenot silversmiths that moved to America began to diverge in their style. Their work is “usually very simple and lacks the ornate decoration and details of execution characteristic of French silver during the first part of the 18th Century,” (Ormsbee 2009). This can be seen in DuBois’ teaspoons, which contain just a few ornamental details, but is more functional than decorative.

Tunis DuBois was born in central New Jersey, in Freehold Township, in 1773. His father, Benjamin DuBois, was a reverend of mixed Huguenot and Dutch descent, which can serve as an explanation for DuBois’ affinity to be a silversmith, as this craft was popular among these groups. Especially among the Dutch, solid silver spoons “were considered very precious objects” according to George Way, a well-known collector and author of 16th-17thcentury Dutch and English furniture, paintings, and decorative objects (“NEWS RELEASE: HHS Holds Closing Reception with George Way”). Way discusses that these spoons were not only highly regarded as works of art in their own right, “but were an indication of great wealth.” It’s part of Dutch custom to give spoons to mark births, deaths, and other momentous occasions (“NEWS RELEASE: HHS Holds Closing Reception with George Way”).

What set DuBois apart from the rest, was his business model—one that I argue, is ahead of his time. Dubois produced his goods to be sold on a wholesale basis. (Laidlaw, 25) This, of course, was before the mid-19thcentury industrial boom, when manufacturing goods like this was the new form of production. However, DuBois was still able to maintain his craftsmanship and leave his unique mark on each good, while selling to a larger audience. He followed the footsteps of his brother, Joseph, and moved to New York City to pursue a profession as a silversmith. Soon after, Joseph took him on as a junior partner, and they began to create holloware and flatware pieces together. Among their more intricate pieces were a neoclassic cruet stand, a sugar bowl, and a teapot.  For most of his career as a silversmith, DuBois’ business was successful. However, the yellow-fever epidemic in 1798 began to take a toll on his business, and he decided to move back to New Jersey, where he acted as both a farmer and a silversmith. This did not deter DuBois to continue his profession. He was still a successful silversmith miles away from New York City—he increased his wholesale sales to his highest levels thus far and continued to attract new customers from the city. DuBois did all this, while still maintaining local business, although these sales made up a smaller portion of his work. Dubois was different than most rural smiths, who tended to only make products for their local customers, whereas he sold his products to shops in New York City. However, where DuBois aligned with his fellow rural smiths was in the manufacture of spoons, which made up almost his entire production. Spoons were almost entirely made by village and small-town silversmiths, as they appealed more to the rural audience than hollowware, which would be commissioned by silversmiths in the city. Dubois stopped making silver around his 40s, and turned more of his attention to farming, until his death in 1843 (Laidlaw 1988).

DuBois was able to carry out his wholesale model without employing a team of people—he was not operating in a workshop with a large workforce. DuBois made most of his spoons himself (Laidlaw, 45). This is another testament to DuBois’ craft and skill, and his ability to be ahead of the curve, while still maintaining his personal touch on his items. This kind of handmade craftwork is a lost art. These teaspoons go beyond their function, they tell a story of an earnest silversmith who took on an ambitious and new business style, while still being able to care for his work and his customers.