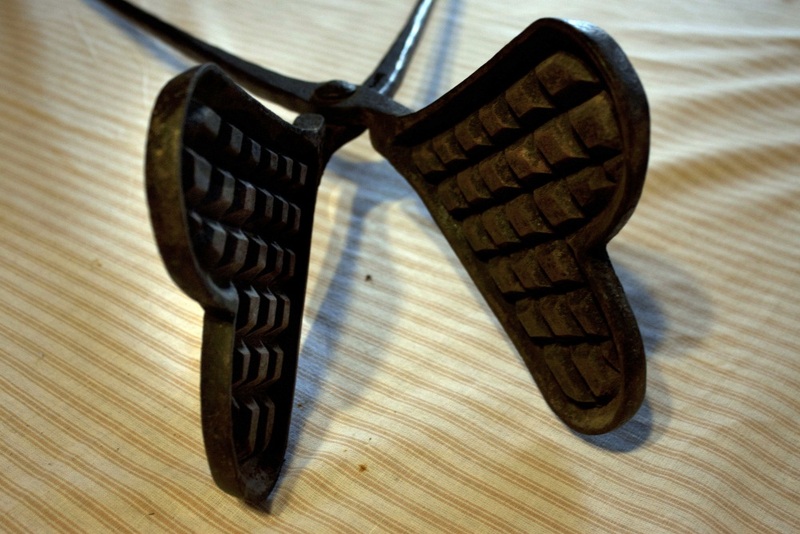 Opened view of a heart-shaped waffle iron from the eighteenth century.

This heart-shaped waffle iron could have been given as a wedding present, and has been passed down throughout generations of the DuBois family. It has felt the heat of an open flame, tasted the batter of homemade waffles, and provides much insight to the style of cooking in the eighteenth century and the lifestyle and culture of the Huguenots of New Paltz.

This is a waffle iron. It is 34 inches in length, with two long, 28 inch handles to prevent the cook from being burned by an open flame. It has a hinge mechanism where the handles meet the press, allowing the press to open and close. The press itself is heart-shaped, with deep, one-inch square protrusions on both sides of the press. Waffles coming out of this iron would be about two inches thick, with several, one-inch square indentations. This iron is mostly black, but rusty browns can be seen in the inner areas of the press, as they are likely worn with use. This iron is surprisingly heavy and rough with slight imperfections around the edges.

The DuBois family was one of the twelve Huguenot families who lived in New Paltz during the seventeenth and eighteenth centuries. Benjamin DuBois owned this waffle iron sometime in the eighteenth century, and it was likely purchased directly from the blacksmith who forged it. However, it is unknown if Benjamin purchased it himself. Waffle irons were typical wedding gifts, so it is possible that he and his wife Catherine received it as a gift. It has since been passed down through generations of the DuBois family, going from child to child. The most recent descendant to own this waffle iron was Edsall DuBois Elliott, who died in the late 1960s. His wife then donated it to Historic Huguenot Street in 1970, along with many other interesting objects. 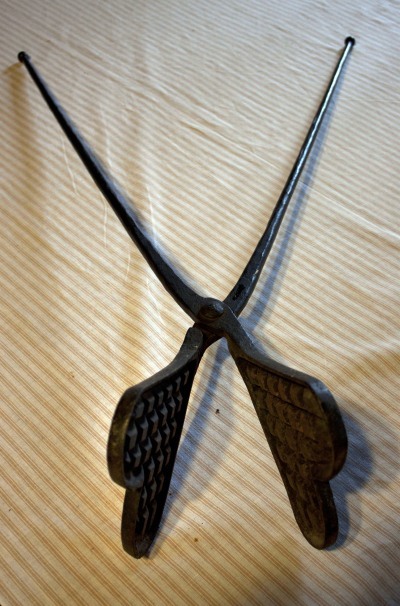 This iron reveals more about the history of New Paltz than one might expect. It has seen hundreds of years of history, and through that, holds knowledge about cooking, culture, traditions, and status.

I’m sure we are all familiar with the smell, taste and texture of a delicious “Belgian” waffle. But this is not actually what a waffle of the 1700s was like. Think of a wafer-thin, crispy treat made from a batter. This is closer to what the Huguenots’ waffles were like. The waffles cooked in this heart-shaped waffle iron were thick, but crispy. These scrumptious treats consisted of flour, butter, milk, eggs, and yeast. They were not served for breakfast, but rather for dessert, and often topped with sugar rather than maple syrup.

Handwritten in the Bruyn family recipe book is this list of ingredients for waffles:

Although cooking instructions were not provided within this book, the waffle iron would have been greased with lard prior to adding the batter. It would have then been placed on the fire for some period of time, before being flipped over to cook the opposite side. In addition to the waffle’s ingredients, this recipe also sheds light onto the quantity of food those of the time would make. Two pounds of flour and one of butter would yield a tremendous amount of waffles, which means they likely had many guests over and fed a very large amount of people. Although these ingredients were not necessarily expensive on their own, we can infer that this family was comfortable, if not wealthy. The quantity of each ingredient would lead to a hefty price to make these pastries. 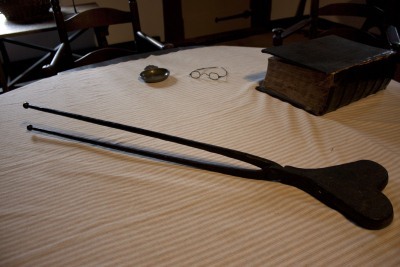 This waffle iron not only tells us what delectable pastries cooked within it, but also explains much about the cooking style of the eighteenth century. All cooking was done on an open flame, within the home: a more dangerous method than we use today. And so, the cookware needed to fit the needs of the cook. The long, 28 inch handles on this iron allowed the chef to comfortably place and remove the iron from the fire without burning themselves or catching their clothing.

Considering that waffles first originated in Europe, this waffle iron provides insight into where the people using it might have come from. Waffles were particularly popular in France, Germany, and Belgium – and naturally, the Huguenots emigrated from both France and Belgium. Waffle irons in seventeenth and eighteenth century New Paltz are evidence of European influence. The popularity of waffles quickly spread to America, resulting in the production and use of waffle irons right in New Paltz, as well as other areas in America.

Now, three hundred years later, this waffle iron is still perfectly functional. It could be filled with batter and placed in a fire to give you a delicious, heart-shaped pastry. Or, it can be placed on display in the village of New Paltz to tell its story. Simple as it may seem, this waffle iron has so much to say, and it will continue to silently observe the world as each day adds a new page to its story.