New Paltz and the Dance Fan 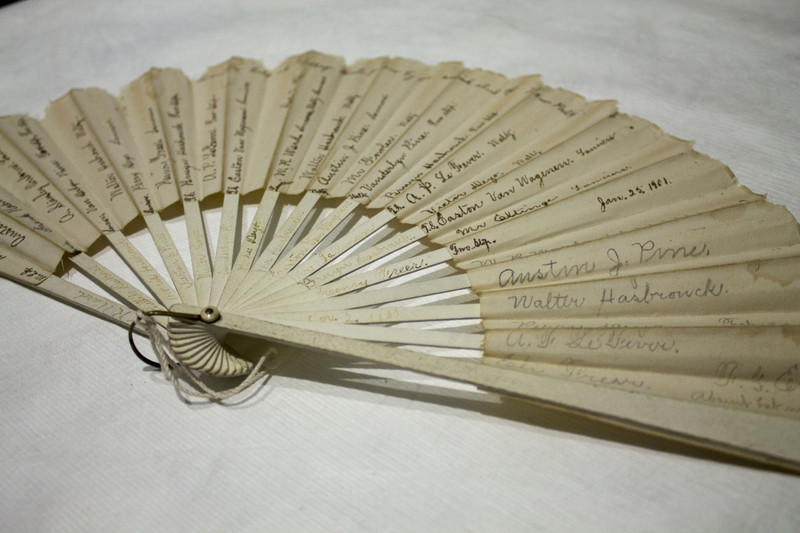 Here is a hand fan showing all the signatures from various men that signed during dances at the Village Hall in New Paltz. Some of the repeat names are interesting in that it shows a probably acquaintance or friendship with our mystery woman.

The hand fan seen above dates back to around 1901/1902, based on the dates inscribed in pen and pencil beside the names. It is made of wooden sticks stacked on top of each other and fastened with a metal rod, loose enough so that they can fan out and spread out the thin-papery material attached to the wooden sticks—which look like long and thin popsicle sticks. On the “web” created by the paper laid across the sticks, names of various men who attended Village Hall dances in 1901 and 1902 are written in light pen ink. Some names are written on the wooden sticks above the paper. On the rounded edge of the fan, it says: “Dances held at the Village Hall, given by the social club of New Paltz.”

This hand fan was used by a nameless woman over one hundred years ago. Sadly, we will probably never know the name of the woman that carried it. What we do know, however, is that this fan was used to mediate a courtship dancing ritual. To make sure every woman who attended these dance parties at the Village Hall had a partner, they would use these fans. The woman would allow the man to inscribe his name on the fan, plus the type of dance, and sometimes the date they danced. When asked to dance, if she wanted to accept she touched the fan to her right cheek. One can imagine in these rituals (where just a simple “yes, thank you” would do) a kind of elaborately Pride-and-Prejudice-esque ball (the 2005 version).

While the fan originally came from New Paltz, it somehow found its way to Wooster, Ohio. It made its way back to New Paltz in 2019 when Cecil Leslie donated the fan to Historic Huguenot Street (Graham). Unfortunately, we do not know the real name of our Elizabeth, who owned this fan, but the names that adorn it are more than ordinary. Some of the wealthiest, and most famous names of historic New Paltz are written here; the last names Hasbrouck, Deyo, Lefevre, and Elting, among others, are a marker of this fan’s importance and its role in history.

As our Elizabeth entered the Village Hall of New Paltz in 1901, she would have carried this fan with her. The dance hall, now the Goodwill Church, formerly Barnaby’s Steakhouse, acted as a meeting place for New Paltz’s society in the early 1900’s.

On July 7th 1865, an advertisement in a local paper announced that the Village Hall was under new ownership. In this small report, the new owners, J.J. DuBois and S. Judkins announced their new plans for the space and new exciting events for the town. This clipping signifies the importance of this building in the New Paltz community. The new owners felt it was necessary to announce their plans because of how much of a staple this venue was for the community. Following this announcement, there are countless other newspaper clippings advertising dances, lecture series, performances and more.

Village Hall is a physical manifestation of the history of New Paltz. Over the past 100+ years this space has taken many forms while always being the center of New Paltz social life. This dance fan gives us a unique look not only into the history of the building, but also the social and cultural history of the people of New Paltz. Many local groups and organizations hosted lectures, parties and events at the Village Hall, but the New Paltz Social Club’s parties were the most popular. Their New Years celebration was their most popular events, and they ran advertisements about the party in local papers.

The New Paltz Social Club hosted the dance where this fan was given out, based on the sheer number of names, the unnamed woman would have brought this fan to multiple dances, seeking many partners. The dances hosted by the New Paltz Social Club were the most popular in town, advertisements in newspapers, invitations and brochures give us a glimpse into the popularity of this group. In order to plan their highly anticipated party, the social club kept meticulous records of their spending and general preparation for their parties. This record book shows that they ran their famous New Year’s party every year until 1924. The social club also hosted upwards of eight dance parties a year, any of which could be where this fan is from (New Years Party Planning Records). The New Paltz Social Club was run by the social elite, all of the reports of elections within the club are full of the names: Hasbrouck, Deyo and Dubois. This social club was a hub for community interaction and events, their parties were heavily advertised and the town would excitedly await for the next event.

Unfortunately, our Elizabeth is lost to us forever. What we do have is our Darcys—though perhaps some of them were Mr. Collinses. Among the names on the fan are some of New Paltz’s famous gentlemen: Walter, Morris, and Bruyn Hasbrouck, A.P. Lefevre, Victor Deyo, Mr. Eltin, Phillip Dubois, and Pierre Deyo. These names populate the streets and buildings of New Paltz, our version here of royalty. Among these is Easton von Wagernen, who would not be quite old enough at this time to have served, but whose father by the same name served in the Civil War for the Union. Many of these names appear multiple times, indicating a close relationship with some of these men, a family connection, or perhaps even indicating that our woman had a stalker or two. The exact connections are hard—perhaps impossible—to parse out; the probability that the fan belongs to one of their wives is high.

It is ironic at best, indicative of women’s lives at worse, that the artifact of a woman survives, yet she continues on in memory nameless. What survives are the man that led her around the ballroom. She held this fan throughout 49 dances, but we know nothing about her except that she liked to dance. This fans demonstrates the social life and social hub that the Village Hall created in New Paltz.