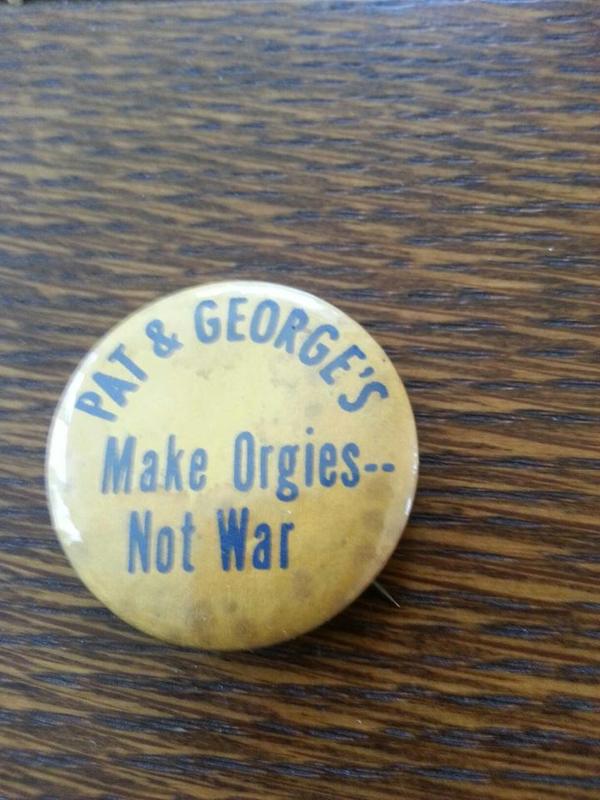 This button dates from between 1965-1975, the period that popularized the phrase "Make Love, Not War."(photo credit: Jamie Burns)

The button pulls New Paltz into the grand narratives of the Vietnam War and the sexual revolution of the 1960s and 1970s. Due to its close proximity to Woodstock, New Paltz in the late 1960s thrived as a countercultural center dominated by youth interests. On October 14, 1969, in the same year, Edwin Beck purchased P&G’s, the SUNY New Paltz Oracle published an open letter: “sent to all New Paltz merchants concerning their role in tomorrow’s Vietnam Moratorium.” To protest the war in Vietnam, at a point when thirty-five thousand Americans have died and after five years of demonstrations and outrage, students initiated a movement to stop all town activity on October 15, 1969. “Students and other citizens are going to suspend their normal activities by not attending school or work,” so town merchants were similarly encouraged to “not conduct business” and join with Poughkeepsie and many American communities in protest. The open letter gets more serious in its urgency for action and repercussions:

“This is part of a continuing nationwide protest that will begin on the 15th of every month with an additional day of protest each month the war continues. Thus, in November it will be a two-day protest, in December three days, etc. However, we are only asking our merchants to close the FIRST protest day of each month, beginning at 12:00 noon.Any store remaining open the first day of protest each month will be boycotted for a period of one week this month followed by an additional week each succeeding month.” 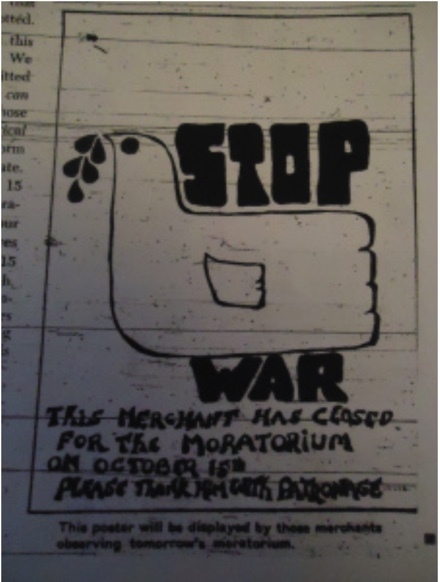 Such efforts joined country-wide sentiments and actions against the war. On November 15, 1969, more than five-hundred thousand people marched on Washington to protest the war, remaining the largest political rally in history yet eliciting no response from the government. The war continued on until April 30, 1975, but the Vietnam Moratorium at New Paltz did not. Information about the Moratorium at New Paltz in the Oracle dies down within 1970.

Not long after references to the Moratorium, Oracle issues in 1970 and 1971 featured campus events and discussions about sex in their “This Week On Campus” column. Little other news about sexual revolution activities existed in SUNY New Paltz news until the 1990s, when the school hosted a sex conference which included a lecture panel on sadomasochists, and instructional workshop on sex toys. However, mention of sex talks in the Oracle already sheds light on the socially-progressive nature of the campus in the late 1960s and early 1970s. This was a place influenced by popular literature of sexual liberation such as The Feminine Mystique (1963) by Betty Friedan and nationally-recognized protests such as the Stonewall Riots of 1969. The button is a record of New Paltz’s connection to the free love movement of the 60s.

The lapel button finally offers the deeply rooted connection of SUNY New Paltz to its surrounding community. Even before Beck made overt efforts to invite students to his pub, George Jayne (one of the owners of Pat & George’s from 1948 to 1969) notes in a 1969 newspaper article that many students enjoyed the institution:

“‘It’s always been a college hangout,’ he stated. Not only is it frequented by college students, but also by former students who are passing through the area… Asked to comment on the students, Mr. Jayne stated that the students who will visit Pat and George’s this fall will be pretty much the same as those who first stopped by when it opened in 1948. ‘The only difference,’ he said, ‘is that there are more of them today.’” (“Pat and George’s Is Sold To Ed Beck”) 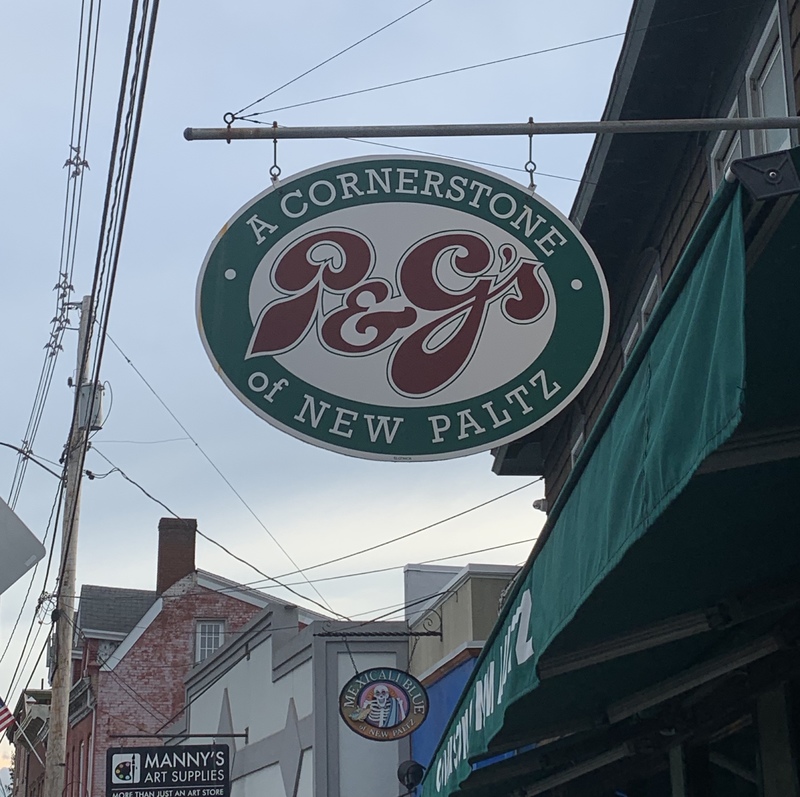 After Edwin Beck took ownership of Pat & George’s in 1969, he hosted a party on campus to introduce students to the restaurant. In a phone interview with Mike Beck, Ed’s son and current owner of the institution recalled that his father lugged as much beer as he could on campus and hosted a party for the college students. “He also gave quarters to the girls so they could use the jukebox when they went to P&G’s. That was a big deal back then,” Mike Beck notes. Subsequently, issues of the Oracle featured advertisements for Pat & George’s nearly every other issue. Nick Wesley, a disgruntled student writing in the Oracle on October 14, 1969, expressed his disapproval of the Moratorium because “P&G’s is closing for the afternoon” and such would anger many World Series fans and picketers. Prior to that academic year, there is no mention of the establishment in the campus newspaper, confirming claims on the P& G’s website that Edwin Beck’s party at SUNY New Paltz reached out “to a wider audience and gave the students… a new place to call home.”

This button is a part of a history of social life in New Paltz, where today students flock to P&G’s, McGillicuddy’s, Bacchus, Murphy’s, Snugs, and many other local institutions on weekend nights for their party fixes. These restaurants and clubs can owe their late-night business to three men: Pat Cafferty and George Jayne, who first attracted the college students, and Ed Beck, who converted his neighborhood bar into a local institution shared by townspeople and students alike. Because of his keen interest to invite the college students off-campus, demonstrated by the liberal-minded button evoking the sexual freedoms and anti-war sentiments of 1970s college students, Edwin Beck converted New Paltz into the college town it is today, which flourishes due to active student patronage at off-campus institutions. 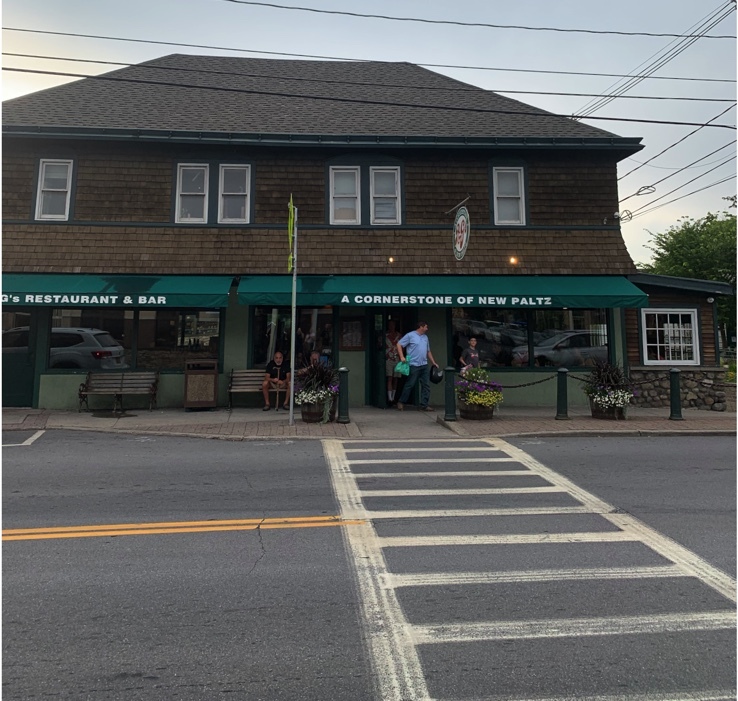