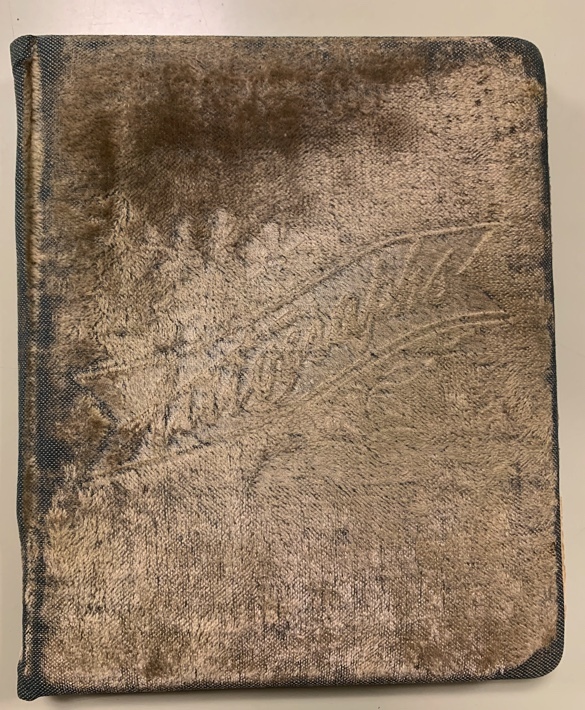 When Jennie C. Overton passed around her velveteen autograph book in June of 1889, she was creating a souvenir of her years at the New Paltz Normal School that would last her a lifetime. Fellow classmates inscribed their names, inspiring quotes, and loving memories on each page, sometimes accompanied by photographs or hand-drawn illustrations. What the graduates of the New Paltz Normal School may not have realized at the time, however, was that their signatures, scrawled in perfect script, would document their experience for centuries to come.

The book itself is moderately sized, approximately 8.25 inches in length, 7.25 inches in width, and .5 inches high. The cover, wrapped in plush, soft, blue-grey velvet and imprinted with the word “Autographs,” is starting to fray and become patchy with age. The pages, once crisp and firm, are yellowed around the edges and delicate, smooth, yet slowly turning to dust. A beautiful cover page, decorated in blues, creams, and browns, pictures a young lady reading, perched comfortably on the letter A for autograph.

And on the first page of the book, written in slanted, neat cursive, the name Jennie C. Overton. 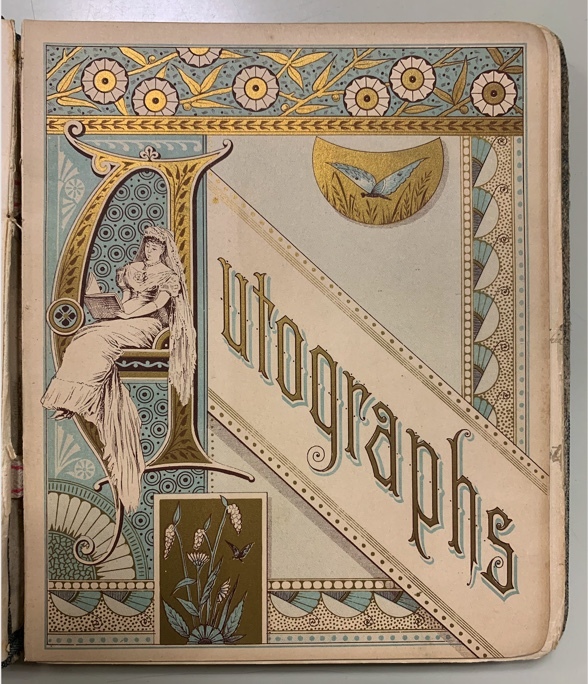 We do not know how Jennie’s Autograph book made its way into the Sojourner Truth Library Special collections at SUNY New Paltz. It could have been donated by a family member, friend or even a stranger who happened upon the book in an antique shop or collection and wanted to return this piece of SUNY New Paltz history back to its home.

For current college students a life without Facebook, without cell phones, without computers seems like a lifetime away. How difficult would it be to keep in contact with all of the people you've met in college? Of course, none of that technology would have even been imagined yet in the late 19th century, when Jennie C. Overton was attending the New Paltz Normal School. Instead of extending a friend request, Jennie and many of her friends carried autograph books that would document their friendships long after school.

Autograph books have been around for centuries, originally students would have their peers and teachers sign in the blank pages of their bibles. But as this tradition increased in popularity, books filled with blank pages appeared on the market, specifically signatures and notes between friends. The popularity of these books started in Europe, but by the 19th century, these autograph books were in the hands of college student across the country hoping to keep ties with their friends as they left school (Elgabri).

One of the ways we can start to understand how New Paltz social life and academics worked in the past is by looking at old yearbooks. But sadly for us, The New Paltz Normal School did not produce any year books either year Jennie graduated. But, lucky enough, there was a yearbook published in 1892 which lists Jennie as a graduate in 1889. In the 30s and 40s we can see the beginning of the “Paltzonian”, a yearbook for SUNY New Paltz, but there is little to no documentation of life on campus before that. This autograph book gives us a unique look into not only Jennie’s life, but what life was like for New Paltz students as a whole. 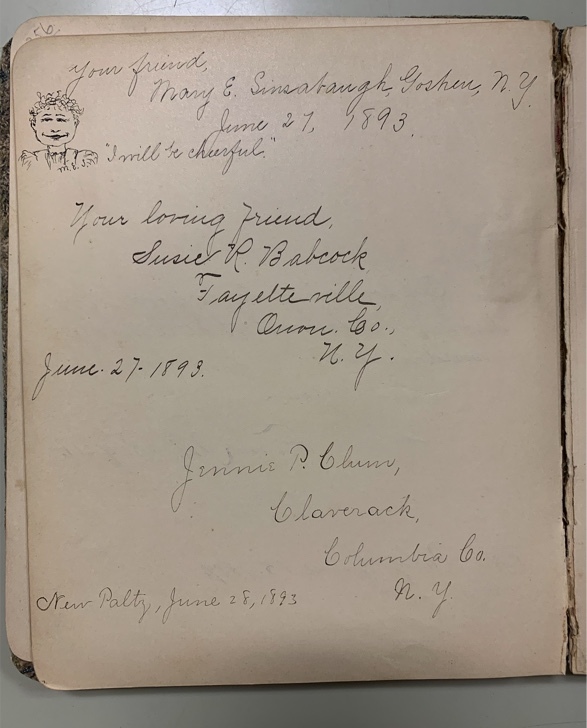 So how much can we learn about Jennie C. Overton through her book?

We might picture Jennie, perhaps sitting at her writing desk, in her bedroom, writing her name in her brand new autograph book, unaware of how this one single act would lead a future SUNY New Paltz undergraduate student to research her life and death, her impact on the world. Who was she? Where was she from? What was she studying?

Jane C. Overton, nicknamed Jennie, was born on October 29th, 1865 in New York. Her parents were Wallace and Anna Overton, and she had three siblings: William, ten years her senior; Edna, two years her junior, and Lillie, four years her junior. The family started in Islip, on the south shore of Long Island, NY, but eventually moved to Bayport, NY (also on Long Island) by the time Jennie was 14. Her father was a farmer and her mother a housewife (US Census 1870).

There is not much documentation of Jennie’s life in the years before her arrival at the New Paltz Normal School. From The New Paltz State Normal School Alumni Directory, we know that once there, Jennie studied English and obtained her degree in 1889. At her commencement ceremony, Jennie presented an essay called “The Universal Language,” in which she discussed the promise of the Volapük language. Volapük is a constructed language that was created in 1879-1880 by Johann Martin Schleyer, with the goal of creating one language that all people of different countries could learn and speak. In her speech, Jennie said, “The world needs a common and simple medium of expression. Many attempts have been made to supply this need, but Volapük is the first and only one that gives evidence of success” (“Commencement Season”). 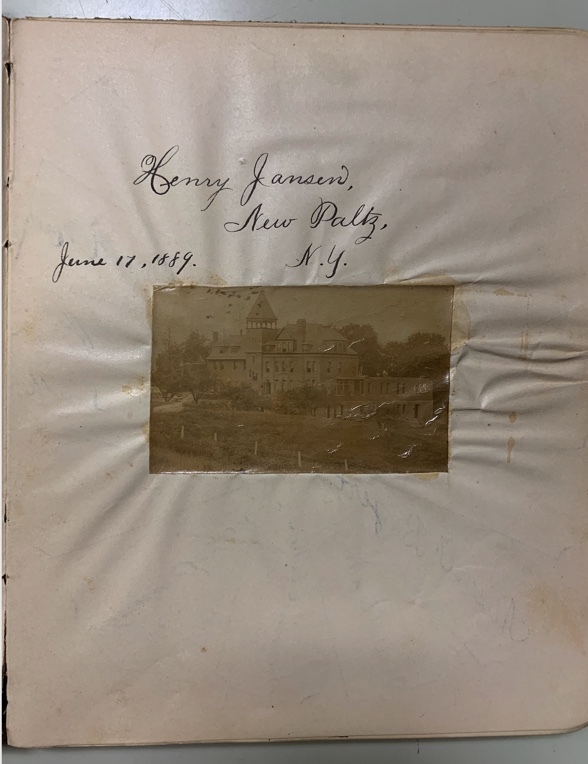 Jennie returned to New Paltz Normal School a second time, graduating with a second degree in old elementary English in 1893 (The New Paltz State Normal School Alumni Directory 1886-1916). But sadly, once again there is no yearbook for this year. Her roommate of that year, Bessie Monsell, wrote lovingly in her book, “I shall always look back with the greatest pleasure to the happiest year of my life which was spent with you, and to that time when I found a friend, that was a friend indeed. Remember me ever, as your loving room-mate of 1892-93, Bessie R. Monsell, Greenport, NY.”

Jennie attended the New Paltz Normal School in the last few years before a tragedy swept the school after a massive fire destroyed the majority of the buildings on campus in 1906. Jennis experienced a now lost campus, while she attended school on the grounds that thousands of college students do now every year, we are distanced from her story because of the space of time and the buildings and memories lost in the destruction of that fire.

Jennie disappeared from records again until 1900, when she is documented living with her parents in Bayport, NY (once again on Long Island) and working as a teacher. At this point in time, aged 35, she was still unmarried (US Census 1900).

Another page of her autograph book is signed by Clara T. Hawkins and reads: 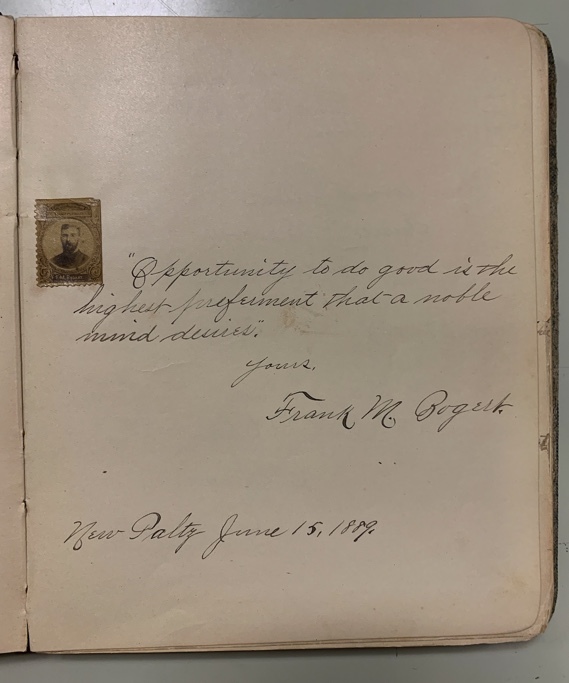 ‘Only do thou in thought

And heart, to Him hold fast;

Be patient; more than thou

Will come to thee at last.’

The inscription would prove to be prophetic in a way. Sometime between 1900 and her death twelve years later, Jennie C. Overton would marry Clara T. Hawkins’ brother, Irving Hawins. They never had children.

Jennie’s husband died in 1911, followed shortly by Jennie herself on the 28th of April, 1912. She shares a plot with her husband in the David Hawkins Cemetery in Suffolk County, New York (“Jennie Overton Hawkins”)