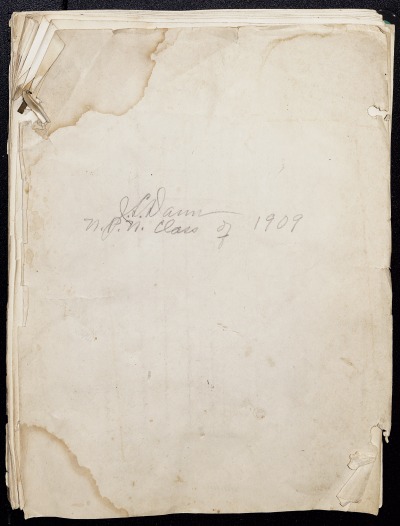 This "Home Economics Workbook" was created by Miss Jennie Lee Dann when she was a student at the New Paltz Normal School.   The pieces include samples of sewing techniques, along with instructions for executing each technique. It serves as a record of course work, as well as a manual for teaching sewing skills to future students.

The workbook was created with 8 1/2" x 11" unruled paper, which has become very fragile over time.   The cover page contains a pencil inscription: "J. L. Dann, N. P. N. Class of '09." As the pages are turned, on the left, a fabric sample of a specific sewing technique is glued to the paper. On the right is a description of the materials used, the size, and step by step instructions for executing the technique. The book includes eighteen stitching samples, called "models." Each sample contains a small label with Jennie Lee's name and the grade received for that item.   Flannel skirt Model XV includes a fold-out tracing paper pattern which could be used to duplicate the sample.

This object is located in Special Collections of the Sojourner Truth Library, SUNY New Paltz, New Paltz, New York. Presumably, the workbook was donated by Jennie Lee Dann to the New Paltz Normal School during her period of employment there (1917-1946.)   Jennie Lee was a teacher of vocal music, and acted as an advisor to the senior "glee club." Although home economics was not her professional field, Jennie Lee donated an exceptional workbook to the library; most samples received the grade of "A." As a woman of the early twentieth century, she was expected to be proficient in needlework. Jennie Lee did not marry or have children, but rather devoted her life to teaching and serving her community (U.S. Census Bureau, 1940). She donated a valuable item in her workbook, an example of excellent sewing techniques to serve as inspiration for future students in the home economics program. 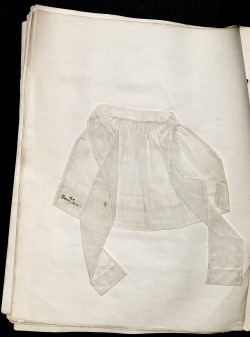 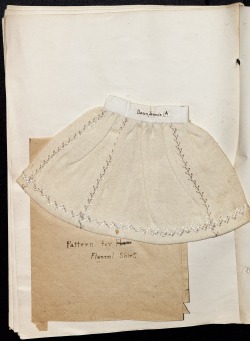 Toward the end of the nineteenth century, sewing, cooking and other related domestic topics were taught as part of a new field known as "home economics" or "domestic science." Girls were expected to become proficient in domestic skills even if they excelled at classical academics (Madigan). Jennie Lee Dann demonstrated her expertise in hand sewing in her workbook, yet she continued her education and professional development beyond the level sought by most of her female peers. 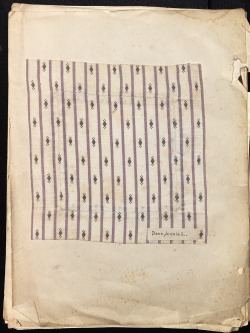 A Pattern in Jennie Lee's book.

Jennie Lee Dann was born in Monticello, Sullivan County, New York on November 16, 1886, daughter of George Dann and Minerva Cook Nelson Dann.   She attended the New Paltz Normal School and graduated with the class of 1909 (Obituary of Jennie Lee Dann).

The normal school system of education began in Massachusetts in 1837 and quickly spread to other states. Its purpose was to teach the standards of education in order to train professional teachers. Prior to this, the training of teachers was not standardized and requirements were left up to local schools. Normal schools included actual classrooms in which to practice teaching at elementary and secondary school levels.   The subject of home economics was a significant part of a girl's education from its inception at the beginning of the twentieth century until the 1960s (“The Normal School”).

The New Paltz Academy was a classical college established in 1828 by descendants of founding French Huguenot families. In 1885, the New Paltz Academy became the New Paltz Normal School. In contracting with the state of New York, the school trustees insisted that a classical academic program be offered in addition to the teaching curriculum, unlike most normal schools, resulting in the availability of three distinct degrees at New Paltz requiring two, three or four years for completion (“History of Campus”).   At that time, many universities did not admit women as students. A normal school education provided women with the opportunity to enter the field of teaching, or continue their education, as Jennie Lee did. A significant part of the program at the school was in the field of "handwork," also called "manual training and domestic science" which included instruction in drawing, manual training, sewing, cooking, weaving and basketry. These topics were taught in schools from kindergarten into their third year of high school and, therefore, were important skills for normal school graduates to achieve.

From her Obituary we learn, after graduation, Jennie Lee taught music in Monticello and Yonkers, and went on to receive her bachelor's degree in music from Cornell University. It was in 1917 that she joined the faculty at New Paltz Normal school where she taught vocal music and acted as an advisor to the Senior Glee Club. She advanced to become head of the music department, and remained at the college until retiring in June 1946.   Jennie Lee then became the librarian for the Elting Library in 1948, serving there for nine years. The New Paltz Independent reported her retirement in November 1957, mentioning that she was also an accomplished painter who had served as president of the local art association. In the article, it states that the Elting Library "Board feels sure the members of the community will want to join in thanking Miss Dann for her outstanding contribution to the betterment of our Town."   A resident of New Paltz for most of her life, Jennie Lee Dann died at the age of 97 on February 11, 1983.