This runaway slave notice was printed in the Poughkeepsie Journal on September 5, 1810. It is a notice from the Hasbrouck family, one of the original patentees, advertising a reward for the return of their slave, Harry.

Tucked away in the New York State Library is a reel of microfilm which feels like acetate to the touch. Upon its surface, each small frame holds a minuscule image of a newspaper page from long ago. One specific frame projects a rectangular announcement nestled amongst “for sale” and “wanted” advertisements. This microfilm clip is a preservation of the September 5th printing of the Poughkeepsie Journal newspaper from 1810. The image shows ]words printed in black ink that announce a reward for runaway slave Harry from New Paltz, New York. The ad describes Harry’s general physical appearance, the items he took with him and states the company with whom he ran away. The letters appear stamped inconsistently in pressure, with some letters having a bolder, darker presence on the page. Some letters are almost illegibly soft and blurred, maybe due to over two hundred years of survival. Although there is no title, the first four words are printed larger than the rest, begging your eyes to keep reading about the reward and Harry. All 158 words are an unformatted, standard text, except for five words located approximately ½ inch from the bottom of the advertisement– “widow of David Hasbrouck deceased.” The microfilm preservation takes away this texture and makes the ink appear as though it was printed on wood-pulp paper. The microfilm was made many years after the newspaper was printed, yet the words are legible for anyone who desires to read a snippet of New Paltz history.

The newspaper containing this slave runaway notice was printed by Nicholas Power and Company and distributed out into Dutchess County, New York. The specific image above is a microfilm version of the newspaper, and we are unsure how the original hard copy made its way into the collection. This ad has a particular story beyond just its printing. This ad is stored on microfilm in the New York State Library, and if it was not preserved in this way, the information may have been lost to us forever. In March of 1911, there was a massive fire in the New York State Library which destroyed entire collections of newspapers, documents, manuscripts, and books. Without microfilm, this snippet of New Paltz history would have been lost forever.

Although it was standard to reprint runaway slave notices multiple times, this notice was only printed once. The Poughkeepsie Journal was a weekly paper, so there may have been some lag time between when the notice was written and when it was published. This can be seen in the date of the notice which says September 3rd, while the Newspaper was released on September 5th.

Slave notices like this begin to reframe many misconceptions of American Slavery, and the Hudson Valley. Despite what many people are taught, slavery was not only in the south. Because so much emphasis is placed on the slavery of the Southern United States, many people remain painfully ignorant of the treatment of Black people in the North and in our very own community. We learn from slave notices like this one that many towns in the North, including New Paltz, were heavily involved in slavery.

By 1750–60 years before this slave notice was written–13,000 people of African descent were enslaved against their will in the Northern states of Maine, New Hampshire, Vermont, Massachusetts, Rhode Island, and Connecticut. The majority of slave owners in the North owned about one or two slaves, an estate of about 50-60 slaves lived and worked in the Hudson Valley (“Slavery in the North”). By 1790, there were 77 slave owners in New Paltz, who altogether owned 302 slaves. To put this into perspective, these 302 slaves made up roughly 13 percent of the total town population (Barry).

The treatment of slaves was just as barbaric in the north, as it was in the south. In New York, black people were punished severely, and unjustly for crimes. Free black men and women in the North would be thrown into jail and sold into slavery if an official claimed they “looked like runaways”. The police would then advertise the runaway in the paper, and if someone claimed that individual was his or her slave, the free black person was given to them without question of whether or not that family had even ever owned a slave (“Slavery in New York”) 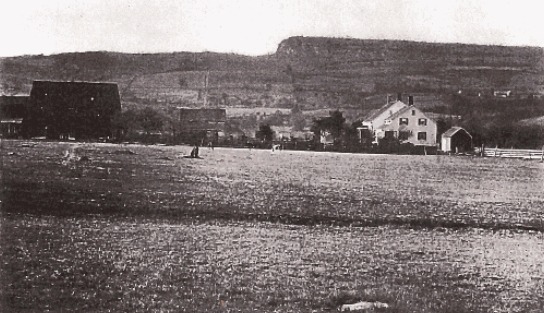 The house where Harry lived and worked under Mary Hasbrouck.

Harry, while enslaved to Mary Hasbrouck, lived on Butterville Road, with a fantastic view of Paltz Point located to the east of the medium-sized stone house (“Town of New Paltz Hamlet Histories”). Butterville Road is only seven minutes away from the current SUNY New Paltz campus, overworked and mistreated slaves were walking down the same streets that we walk on every day. They built homes and worked the land that we New Paltz residents are surrounded by; we are much more closely connected to slavery than many of us think.

As of 1810, Harry was Mary Hasbrouck’s only slave, but before her husband’s death, they had owned many more (“United States Census, 1790”). The Hasbroucks were a founding family of New Paltz and signers of the New Paltz patent. Mary Hasbrouck’s mother-in-law, Wyntje Deyo, was one of the wealthiest residents of the community and David Hasbrouck (Mary’s deceased husband) had inherited all of his father’s land in Ulster County. We know that they were wealthy enough to hire people to work for them instead of enslaving them, yet they continued to own slaves.

Harry is said to be fleeing with another escaped slave, but this notice is only offering a reward Harry’s return. By reading advertisements like this, we can better understand the overt and covert racism held in the Hudson Valley. The ad describes Harry as “remarkably” well-spoken, and notes it as a distinguishable characteristic against other black people. Similarly, the placement of the ad continues to dehumanize Harry as his ad is placed among the “For Sale” and “wanted” notices.

This ad also gives us a look into clothing for slaves and free people at the time. The ad takes care to detail every aspect of Harry’s clothing right down to the color of the buttons on his coat. This was in an effort to distinguish Harry from other free black people in the area. The specific details of his dress show an economic difference between white citizens and black citizens; it would not be odd to see a white person with velvet pants and a coat with gold buttons, but because of income disparity, it would be uncommon to see a free black person with such luxurious clothing. Similarly, this also shows us that Harry would not have had access to clothing equipped for travel, so he would have had to steal these items from Mary.

This slave notice and the New Paltz Slave Registry are the only documents that prove that Harry even lived. This note was only put into the paper once, which could mean that Harry was found and brought back or that he escaped successfully into freedom. There is no information about his life or death, and we only have the few documents that exist to place him in the Hasbrouck household as a slave. This lack of information leaves us wondering more about Harry and his life in New Paltz. We have the history of local influential families painstakingly documented from the moment they landed in America, but what do we have on the hundreds of enslaved black people who lived in New Paltz and the Hudson Valley? Nothing more than a slave registry, or a dehumanizing ad, for their return.

This ad also shuts down any modern skepticism on whether or not slavery was present locally. With recent conversation on renaming the dining hall and surrounding buildings on the New Paltz campus, it is important to look to ads like this which clearly show that slavery was an active and largely accepted part of society. The document reminds New Paltz residents and residents of the greater HudsonValley, of the atrocities that occurred here. Slavery remains a relevant, and ever-present, aspect of our history.

Downey, Meg. “From the Bill of Rights to IBM.” The Poughkeepsie Journal. 14 March 2013. https://www.poughkeepsiejournal.com/story/news/local/2015/08/10/bill-rights-ibm-st-centurypoughkeepsie-journal-dutchess-county-history/31444365/