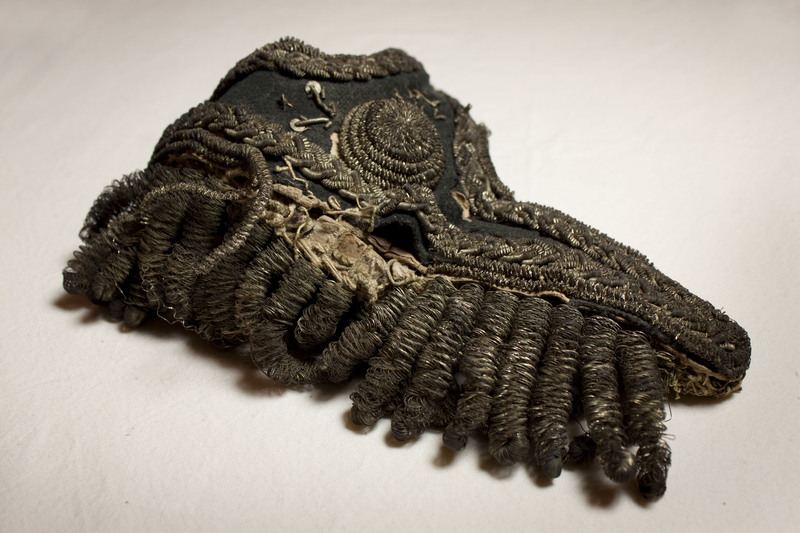 This epaulet belonged to Colonel Johannes Jansen Jr. who served in the 4th militia during the Revolutionary war.

This epaulet measures about 24 cm in length and 14cm in width.  The steel or metal wiring hangs in coils about 5cm from the body of the epaulet and runs through the front. A braided pattern and two coiled lines made up of the metal border the edges of this piece. In the center of the epaulet is a ball of coiled steel that wraps around itself. This ball measures about 3 ½ cm in diameter. There seems to have been more metal decorations, but these must have gotten ripped out and damaged over time. Beneath the metal decorations is black wool and just underneath that is a thin paper where the metal is sown into for support. Under this layer of paper is a sheet of metal and finally, under this, there is a coarse form of cotton that fills the insides of the epaulet. The underside of the epaulet is made of tan linen or cotton fabric.

Some of the coils hanging off the epaulet are falling apart and the seam connecting the hanging coils to the body of the epaulet has burst open, allowing us a look inside. On top of the epaulet, parts of the wool and paper have been ripped away, exposing the metal underneath. It seems that the layer of metal inside the epaulet gives it shape, although a section must be broken because one of the “wings” of the epaulet concaves in about 10 cm. 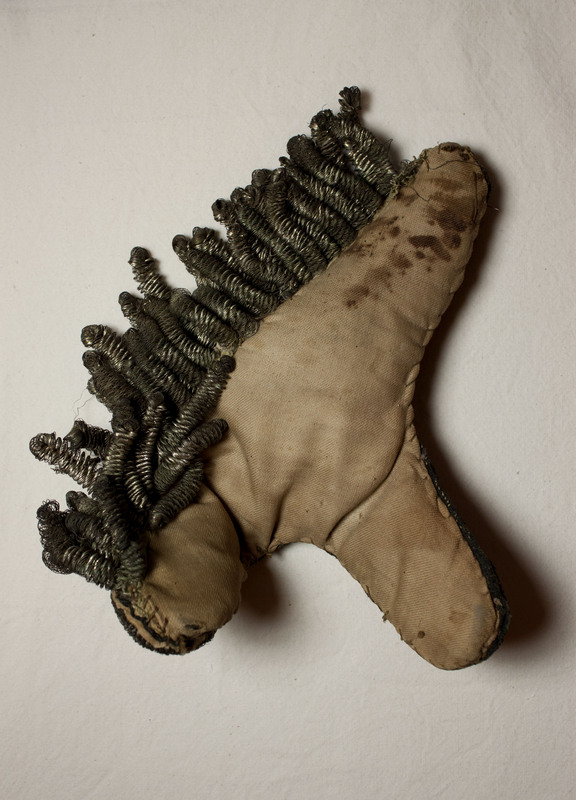 Before the 20th century, epaulets and shoulder straps were commonly used to show the rank or status of an officer. The rank of the officer was usually deciphered through the insignia that appeared on the epaulet strap or, near the rounded portion over the end of the shoulder (the crescent). For ranks like ‘Major’ or ‘Second Lieutenant,’ the sizes of the epaulet or the fringes on the epaulets were indicative of the officer’s rank (since some officers did not wear any insignia). The word "epaulet" was derived from an Old French word meaning shoulder. They were first made with cloth straps that were worn to keep shoulder sashes and belts in place. Epaulets were also thought to have begun as protective pieces of armor to shield the shoulders. During the Revolutionary War, epaulets were used both by the British and French. These epaulets were created with gold or silver and started from the collar and ended at the end of the shoulder. They were decorated with heavy fringes of gold or silver wire. Officers started wearing gold or silver epaulets in their dress uniforms around 1780 during the Revolutionary War, and continued to do so until about 1872. For sergeants and other enlisted men, the epaulets were made of cheaper metals or cloth (Navy).

Johannes Jansen Jr. was born August 5, 1725, in Kingston N.Y. and died August 30, 1803. He was married to Antje Hardenbergh and, after her death in 1791, he remarried to Rachel Robinson in 1792. He was the lieutenant colonel of the fourth (Hardenbergh’s) regiment of militia and he represented the people of Shawangunk in the Revolutionary War. Other men in Colonel Jansen’s regiment were: Captain Isaac Davis, Matthew Jansen, Cornelius, and Matthew Masten, David Ostrander, Peter Roosa; Lieutenants Jacobus S. Bruyn, Peter Decker, William Ostrander and various others (Clearwater 376). 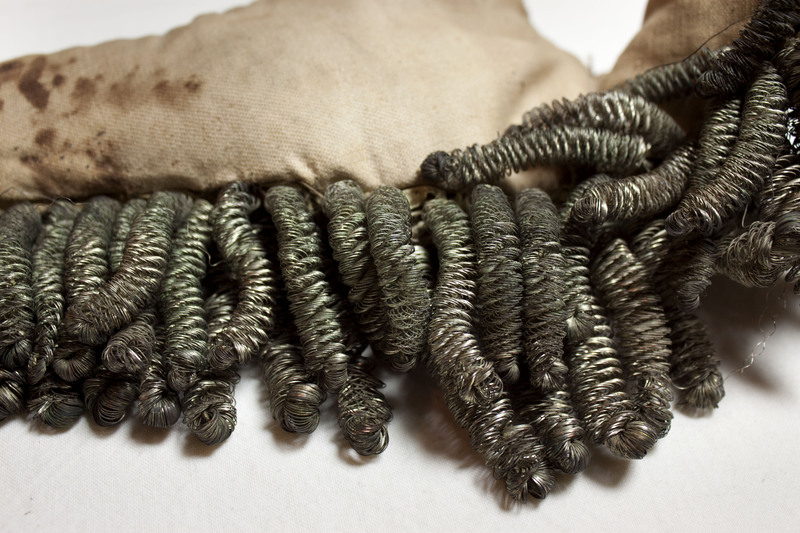 In “Notes of the Ancient History” of Ulster County, published in the New Paltz Times of March 10, 1865, the author mentions a Colonel Jansen. He is identified as a Colonel of the militia of Southern Ulster, a member of the Whig party, very wealthy, and as the owner a homestead near the mountain. The article tells the story of a group of Royalists who attacked Jansen in his home.

In September 1780, two members of the loyalist party Samuel Gonsalus and Benjamin DeWilt (as well as three Native Americans) tried to attack and capture Colonel Johannes Jansen. Samuel Gonsalus was well known in the area as the ‘Indian hunter,’ but he formed a temporary alliance with the Native Americans in order to capture the Colonel. Benjamin DeWilt or ‘Shank’s Ben’ served in the French war, and previously knew of Johannes Jansen before the attempted ambush. The group of five tried to attack the Colonel outside his home but failed when a boy alerted the Colonel. Instead of taking the Colonel, the group was then forced to take three slaves and a girl named Hannah Grunenwalden (who was employed to work for the Jansen family) when they were discovered in the kitchen of the Colonel’s home. Hannah Grunenwalden was then killed along the trail because there was a chance that pursuers would be able to track the group down as a result of her cries. When the group reached the area of Scrub Oak Ridge, they encountered another party consisting of a man named John George Mack, Elsie (his daughter), and John Mentz (his son in law). While John Mentz was able to escape, John George Mack and Elsie were killed and scalped immediately. Later on, members of the militia found the remains of the deceased and bodies of Hannah Grunenwalden, John George Mack, and Elsie Mack were buried (Quinlan 395).

Was this epaulet a witness to that moment in Ulster County History in September 1780? Was this object being worn by the Colonel himself as he was about to be ambushed? This is all impossible to know, but on that day this epaulet put the Colonel in a dangerous place.