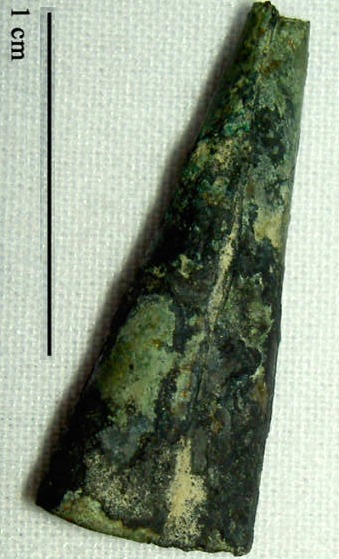 These metal decorations are surprisingly small in person. They are marked as only one centimeter long, but when you see them they feel even smaller. These cylindrical cones are bent into an uneven shape and they show the wear of many years of use of the outside. The metal has greened over, making it safe to say that this tiny instrument is made of a copper alloy, or another similar metal that turns green when it comes in contact with water. When holding these in your hands they are incredibly light yet firm. The uneven texture of the metal is rough against your hands and the tiny size makes it feel like it will slip out of your hands and be lost forever. The object description on the Historical Huguenot website describes them as, “...made of sheet metal trapezoids, rolled into a cone, and attached to knife sheaths, pouches moccasins, or other clothing”(“Tinkle Cone”).

These small, decorative sheet metal cones are currently a part of an exhibit at Historic Huguenot Street called “Before Hudson: 8,000 years of Native American History and Culture”. This exhibit features the findings from archeological digs in New Paltz.

This particular tinkle cone is dated anywhere from 1609 to 1700. This object, like many others in this collection, was found in an archaeological dig done by Joe Diamond and his team of students. Professor Diamond has ran these digs every year since 1998, and his contributions to the collections at Historic Huguenot street have transformed the scope and narrative of local New Paltz history.

We approach the scene: on one side of the clearing, Dutch settlers arrange a wide assortment of brass and copper utilities, iron weapons, silver cutlery, blankets, cotton clothing, liquor, and guns. They seem confident, chatting amongst each other, knowing the sale will go well and they will profit, maybe more than they deserve. For them, these objects are commonplace, imported from Europe where the technology has long existed.

Still, there is a slight sense of fear in the air. Since their arrival in North America, the settlers’ relationship with the Native Americans has been unpredictable, largely because of the difference in cultures, violence perpetrated by the Europeans, and a lack of efficient, or in some cases honest, communication. Quietly but purposefully, their trade partner signals his arrival with the snap of a twig: stepping out of the forest, an Esopus Indian. 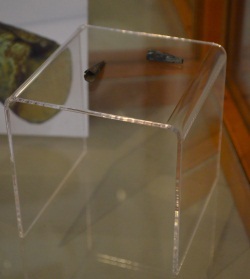 He is tall, strong, with dark hair singed off at the sides, leaving the remaining hair styled like a cock's-comb, and around his head stretches a headband, a feather sticking out of one side. Bare-chested, he wears a light-colored leather skirt and a quiver of arrows wrapped around his chest. Hanging down his back is a turkey feather mantle: an impressive display of craftsmanship in which iridescent turkey feathers are woven into a netlike cloth that repels water. Across his sinewy shoulders stretches a dead deer, a peace offering to the Dutch.

Deals are made, objects exchanged, and a part of history is formed. Each side leaves with something new in their pocket: metal utilities that make survival exponentially easier, or a piece of paper that signs away hundreds of acres of land. One of the most important trade items of all, however, was shiny, malleable copper. This element, never before used by the Esopus Indians, provided a variety of new utensils, weapons, and decorative accessories that could be easily made or altered (Kraft 379). While projectile points and pots were essential to the Esopus way of life, one surprising object of a different nature survived 400 years to be found in New Paltz, NY. This object was the tinkle cone.

Tinkle cones, or tinklers, are small pieces of copper rolled into the shape of a cone. When attached to dance and ceremonial clothing, these cones created a melodic jingle, the perfect accompaniment to the drums, rattles, and custom songs of the Esopus. Women, their hair plaited behind their head into a club shaped like a beaver's tail, would sew these tinklers into their animal-skin dresses, dangle them from their ears, and tie them into their hair in preparation for the Jingle Dance. The Jingle Dance came to an Ojibway healer in a vision, where she saw a beautiful dance performed around a sickly chief that would restore his health. After the dance proved successful, it evolved into a tradition amongst the Lenape (including Esopus) Indians.

While the Esopus culture was tragically destroyed during the increasing settlement of the land, their delicate copper accessories, then a bright metallic orange, survived the test of time to inform later generations of the people that once lived in the area. Now, like the earth that played such a crucial role in the lives of their people, the tinkle cones are a beautiful, natural green. The tinklers were found during an excavation of Historic Huguenot and can be seen in person at the Historic Huguenot Welcome Center.