Older than this Country: Pierre Deyo's Ladder Back Chair 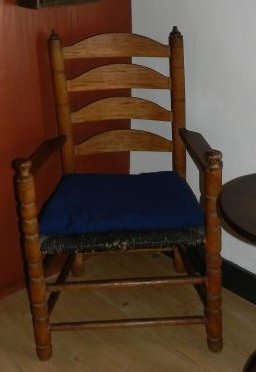 Image of Chair with Cushion on the seat.

This ladder back chair, owned by Pierre Deyo in his lifetime and by the Deyo family until 1926, is thought to have been built between 1650 and 1700, making it older than the United States.

This is a large and heavy, wooden chair in the ladder back style. Wooden slats running the back of the chair are what give this chair it’s trademark name. These panels are smooth to the touch and give comforting back support to anyone resting in the chair. The front poles of the chair are rounded with designs and smoothed out, possibly on a lathe. The entire chair is made of a light wood which retains the imperfections of untreated wood, the parallel support beams that run under the seat match the style of the rest of the chair. It is made of a pale wood, such as oak or pine, with a shellac finish (Giese). The only different section is the seat, which is made of a thin woven wood and painted black. This ladder chair style was popular in the Middle Ages all the way through the eighteenth century (“Ladder Back Chair”). The seat is caving inwards, and is fraying towards the front of the seat. The right leg has some scratches on its finial. 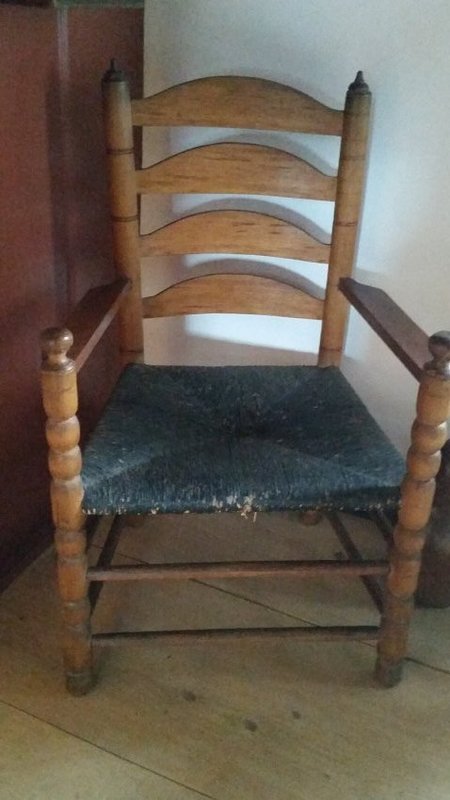 Pierre Deyo, one of the original patentees of New Paltz, was the first owner of this piece.  It is thought to have been built between 1650 and 1700. He most likely would have bought it from a local craftsperson. When Pierre died in 1708, his land and estate was split between his four sons, Abraham, Christian, Pierre, and Hendricus (“Deyo Family Papers”). This item was considered part of the Deyo household, included within Deyo’s grandson Peter’s will in 1791 (State of New York). The chair remained in the Deyo family up until it was purchased by Historic Huguenot Street from the Andrew LeFevere Deyo estate shortly after his death in 1926.

Pierre Deyo (ca 1648-1708) was one of the twelve patentees of New Paltz. Along with the other members of the Deyo family, he was incredibly involved in the community, as evidenced by their extensive collection of records collected and maintained by Huguenot Street. This chair, which today has a home in the Abraham House, is older than the United States, and remained in the Deyo family about as long. The ladder back style—which was ubiquitous at the time—is older still, thought to have originated in Europe in the Middle Ages (“Ladder Back Chair”). The simple, but enduring, style is now very much desired by collectors today, which is a testament to how well-crafted these chairs are.

This style also reveals an important aspect of New Paltz life at this time: their Protestant religion. Protestants tended to favor more simple and less ornate pieces which were more functional than beautiful. The Huguenot settlers were practitioners of a late ancient Christian asceticism. According to Richard Finn, in his book Asceticism in the Graeco-Roman World, this Protestant asceticism is based on Greek morality, and that:

Virtuous living is not possible when an individual is craving bodily pleasures with desire and passion. Morality is not seen in the ancient theology as a balancing act between right and wrong, but a form of spiritual transformation, where the simple is sufficient, the bliss is within, the frugal is plenty (94).

Later on, the Deyos and other important families of New Paltz would obtain the more ostentatious and beautiful furniture of the Federalist and Victorian eras, but the desirability of the furniture shows that there is an enduring appeal towards this aesthetic. Simple objects and simple homes speak to the fast held beliefs of these people—further evidenced by the plain decoration of the rebuilt French Reform Church.

The chair’s craft is also derived from the area. According to woodworker Bob Giese, the piece would have been made out of wood that could be obtained easily and locally; it is thought to be pine, oak, or perhaps maple. Additionally, is has been finished with shellac, which could be made by mixing tree resin and alcohol; as shellac has a shelf life (albeit of months or years), and requires skill to apply, Deyo himself was likely not the one who made the piece, but rather, a skilled local artisan.

This piece would most likely have sat by the fireplace in one of the few rooms of the Deyo home. After a long day of work, it would have been a comfortable place to return to and to unwind. Possibly, it could have been sat or worked on by a slave—Pierre owned at least one, as evidenced by a receipt in the Deyo family papers from 1694.