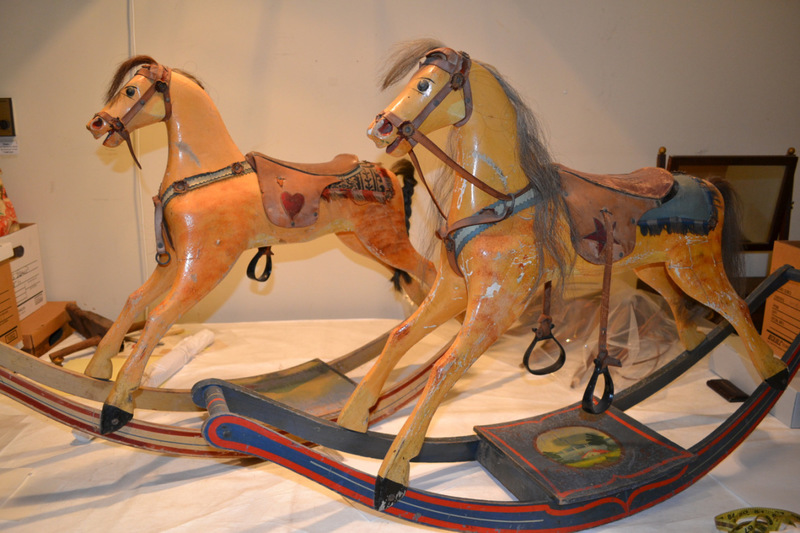 The rocking horses shown above are believed to be from the late 1800s and are primarily made of carved and painted wood, which includes the bodies of the horses as well as the curved bases which allow the horses to rock. Both horses are painted yellow, and the bases are blue, with red detailing running the sides of the rocker. In the center of the base is a landscape, both horses are adorned with gray manes and tails,  the other features such as the eyes and nose are painted on. The original saddle, stirrups, reins, and even the ears of the pieces were made of leather, though these horses are missing many of these details. 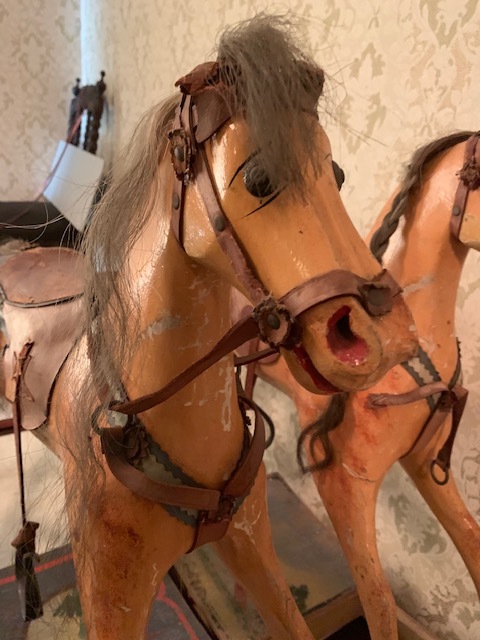 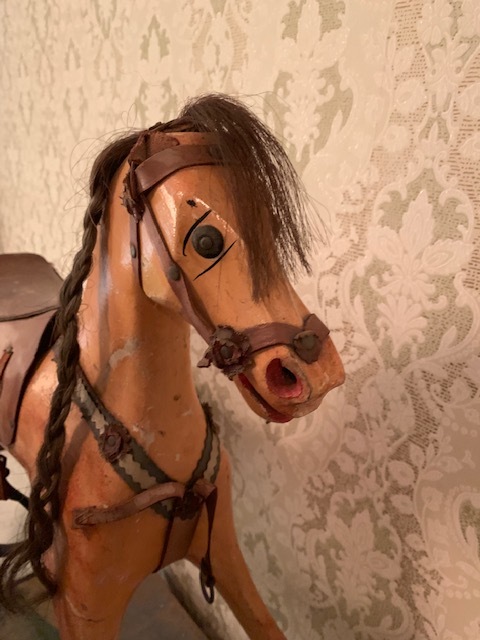 These rocking horses have intricate details, which leads us to believe they were likely handmade and were not mass produced. As mentioned, the horses and bases themselves were carved out of wood. Curiously, the horses’ bodies are hollow which was a technique perfected in the Victorian era to make toys less top-heavy, and therefore safer. The exterior of the bodies are painted yellow, the wood most likely lies under layers of paint and gesso. Gesso, which is used in fine art paintings, was found to be to sand than wood; and, it created a shinier surface to paint and decorate. Saddle blankets painted over the hindquarters of the horse, and landscapes on the base of the rockers are details which make this toy stand out. The saddles, stirrups, and reins are all made of real leather, another costly adornment for a child’s toy.

This set of rocking horses, which were used by brothers Winne and Henry Hornnbeck in their childhood years, were donated to the Historic Huguenot collections by the estate of Ida M Hornbeck in 1976. Ms.Hornbeck had passed just the previous year in 1975 and had left many of her family’s items and historical artifacts to historic Huguenot Street as well as other local historical collections. When tracing her lineage to Winne and Henry Hornbeck I discovered that she was their older sister. None of the siblings had children, so it is safe to assume that these rocking horses were purchased for these siblings, and were never used by anyone else. While we may never know where these pieces were made, we can theorize about how they connect to the New Paltz community. It is possible that these items were purchased from their father Louis Dubois Hornbeck’s general store in Napanoch. But, we may never know for sure.

Although these objects were not primarily used in the town of New Paltz, their ties to historical New Paltz and its socioeconomic structure can be easily connected. I see these pieces as a mark of status and luxury; they are not the everyday doll or trinket. Instead, these objects were most likely bought new and were handcrafted pieces of art as much as they were toys. However, we cannot know for certain how and when these rocking horses were made because there are no manufacturer's marks or dates on the toys. Because of this, it is possible that these were handmade by someone in or close to the family. These pieces functioned as both furniture and toys, and as they are both clearly well worn I believe these were pieces that would’ve been put out in the main room as their own pieces of furniture. 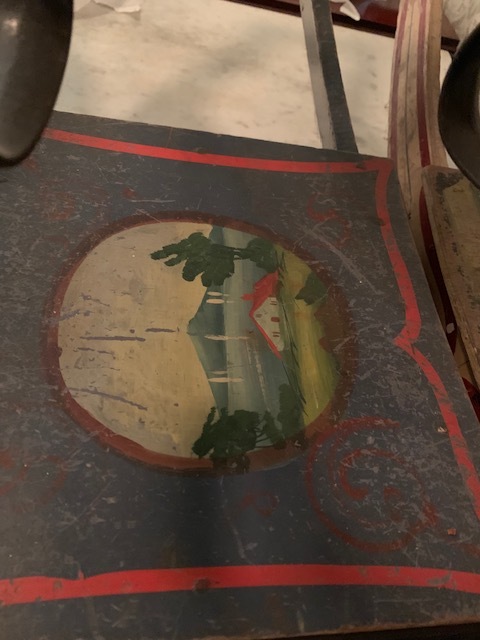 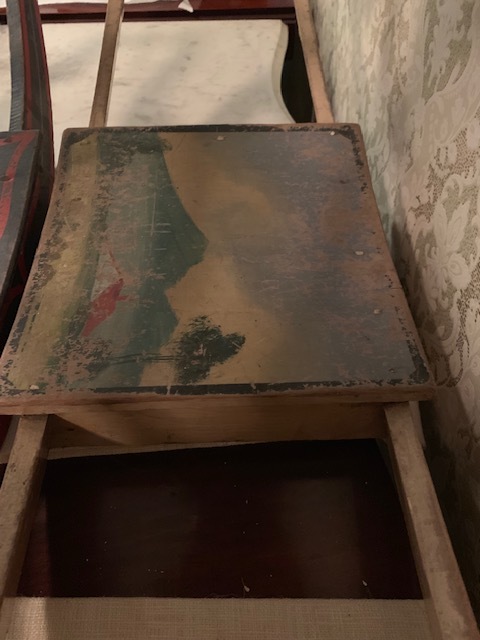 Toy horses and specifically rocking horses became popular as toys and furniture among the upper middle class after Queen Victoria established that they were her favorite. They were made in many different styles and colors and some had clear inspirations from imagery and forms found in carnivals and fairgrounds, which was a popular source of entertainment of the time. However, during the 1900s the production of rocking horses, especially the intricate handmade ones which had thrived during the Victorian era, were declining due to the Great Depression and the World Wars (“History of Rocking Horses”). The survival of these pieces is extraordinary and gives great insight into the lifestyle of the Hornbeck family who owned them as well as the social culture of the time.

When looking into both their family story as well as their extended genealogy, I found a few evidences of the family’s enriched status. First, as previously mentioned, Louis Hornbeck ran the largest general store in Napanoch, with a very comfortable house–which he owned–connected. His wife Catherine Freer Dubois did not work and I also found evidence of there being a young servant living with the family for a time (U.S. Census Bureau, 1880). This was not uncommon for the area including New Paltz for families with luxurious lifestyle. Additionally, a 1920 U.S. Census tells us that both Ida and Lela Hornbeck were single well into their mid thirties, and never had to hold a job but were rather able to live off of the estate of their family for the rest of their lives. Both the 1920, and the 1880 censuses show us that Brothers Winne and Henry Hornbeck did both end up marrying but neither had children in their lifetime. When looking further into the ancestry records of both the siblings mother Catherine Dubois Freer and their father Louis DuBois Hornbeck I was able to find that their mother was a descendant of Hugo and Isaac Freer, the original patent holders for the town of New Paltz. The Freers had been given 1200 acres to settle on in New Paltz and continued that line of wealth well into their descendants (Heidgerd). While this is an interesting fact about their family it is also important to note that both mother and father had previously come from the Dubois family. It was very common in New Paltz among the wealthy families to intermarry children and cousins of the wealthiest families to keep the money close. This is one of the reasons that although the Hornbecks did not live in New Paltz, their prominence in the area was well established. These rocking horses are a symbol of the level of class and financial status of which this specific Hornbeck family was a part.