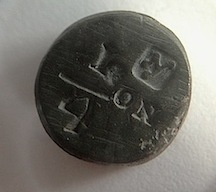 Reverse side of the weight (photo credit: Alexandra Nasar). 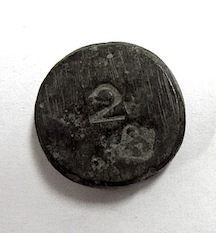 This unusual disk with mysterious markings is a French apothecary weight.  It reveals the complexity of economic and medical systems in New Paltz during the seventeenth and eighteenth centuries.

The weight is a dark grey rusted color with tints of green. It is worn and scratched throughout its surfaces and edges. It is around 2 cm in diameter, .5 cm thick, and is made out of brass.

It has several faded markings on both sides.  One side has etched into it the number “2” and a strange stamp or hallmark boxed towards the lower right.  The reverse side has the fraction “1/4” with the letters “ON” and the same strange symbol boxed in the upper right, it also appears to have some sort of marking or scratch right next to the “1”. At 7.7 grams, the weight is indeed roughly 1/4 ounces, which explains the markings of “1/4 ON”. Numerous weights from this time period are marked with the letters “OZ” for ounce, but this weight is using a less common abbreviation, probably to indicate the French ounce, or “once”.  It is less likely, but also possible the “ON” stands for the early Dutch word for ounce, “ons”. 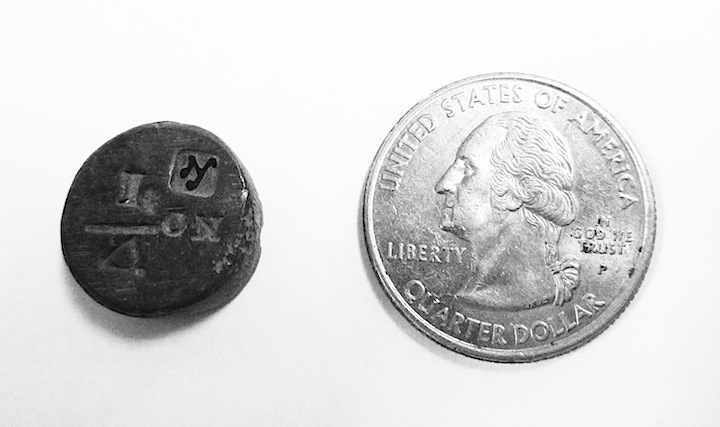 Weight in reference to a quarter (photo credit: Alexandra Nasar).

This object now resides in Dr. Joseph Diamond's collection of artifacts in the SUNY New Paltz Archeology Department. The object was discovered by the SUNY New Paltz Archeology Department behind the Hasbrouck house in historic Huguenot Street on July 30th, 2002. The symbol on the weight, darkened here, could be anything from the Greek letter Lambda, to a highly stylistic cursive “Y”, to a Hebrew letter. Several databases depict different hallmarks or stamps, which indicate a time period, nation it was created in, apothecary measurements, or producer’s company. Trade catalogues from the period include weights with marks similar to this, all of which were used in apothecary weights from the mid 17th to 18th century. This weight was most likely originally owned by an apothecary practitioner among the early European settlers in New Paltz, probably Dutch or French.  When traced back further, one can infer it was created by a French manufacturer some time around 1640, who then sold it into the apothecary or medicine market, along with other weights like it and brass scales- where the owner bought it and carried it over to what is now New Paltz for its use in the medical sciences.

This mysterious metal weight contains a niche of colonial history at New Paltz, specifically in the medical system, science, measurement, and the early economy. Based on the unique markings on this object, I have discovered that this weight is a French apothecary weight from the 17th-18th centuries. A practicing apothecary would have the most use for a weight like this one.

An apothecary was the doctor of colonial times. They were like pharmacists, yet did much more than distributing and creating drugs and medicine. The apothecary was a vital part of society for the Huguenot at this time, and these practitioners held many interdisciplinary jobs. They practiced in traditional and non-traditional treatments using herbs, medicine, and essential oils. Along with making and prescribing medicine, they also performed surgery, healed ailments, trained apprentices, and served as midwives. 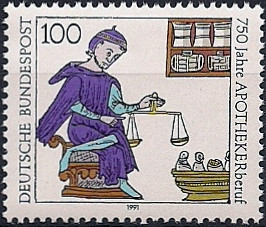 Apothecaries held a very high status in their communities, they were respected for their work and expected to carry out their services to a high standard. Records kept by eighteenth-century apothecaries reveal that they would see patients in a clinic, sell herbs and other medicinal goods in a shop (often in the same space), and make house calls to treat patients (“Apothecary”)

An apothecary frequently used a variety of weights and scales to accurately measure both solid and liquid ingredients, commonly to mix herbs, oils, and medicine. Although apothecaries made house calls and traveled frequently with mobile sets of nesting weights and scales, this weight most likely had a primarily commercial use, not by the patient in his or her own home. This weight would have been among the many other instruments lining cluttered shelves of the apothecary’s clinic or shop; mixed in with scales and jars, tools for surgery and compounding and dispensing drugs, and books filled with pharmaceutical research and recipes. 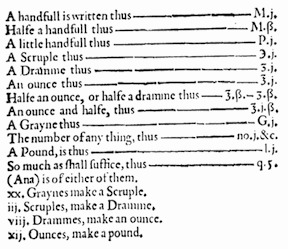 This weight is part of the apothecary system of mass units. This system was based off of the weight of one grain of wheat because it was the smallest practical unit of weight at the time. The apothecary system divides a pound into 12 ounces, an ounce into 8 drachms, and a drachm into 3 scruples or 60 grains. Unusual symbols, similar to the one depicted on this weight, and Latin characters were used to denote weights, measures, and medical instructions or recipes.

The apothecary system of weight was closely connected to commerce, and this object gives us insight into the early economy of New Paltz and Europe. This apothecary system was closely related to the troy and avoirdupois systems of weights used for precious metals and general trading, respectively. Currently, we do not usually associate weight and money in any significant way, but for almost two and a half thousand years the weight of a coin, rather than any marking (as we use to distinguish values paper money), determined its true financial value.

Weights very similar to this one were commonly used to measure coins and determine their value. The difference between coin or trade weights and apothecary weights can be seen through their markings and symbols.

This inconspicuous brass weight has embedded in it an immense amount of colonial history in New Paltz through its function as an expedient apothecary tool, the apothecaries roles in society, and its ability to reveal the economic systems. Apothecaries play an important role in depicting centuries of early history at New Paltz, and made lasting impressions into the present; some of the ingredients that were used in colonial apothecary remedies that were made using this weight—such as adding chalk for heartburn and calamine for skin irritations—are the basis for medications today.