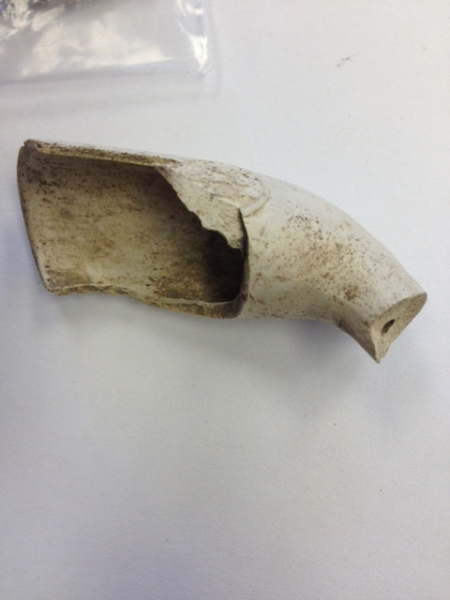 This 17th-century pipe fragment was found in Historic Huguenot Street in New Paltz, in late 2012. This particular fragment was part of a clay pipe fashioned by Hendrik Gerdes, a Dutch pipe maker, as his initials can be found on the heel of the pipe. Although a seemingly mundane object, this pipe gives us particular insight on colonial life in the Hudson Valley.

The pipe is in four separate pieces and appears to have been white at one point or another. But, of course with the passage of time, the outside has become jaded. While there are scratches and points of discoloration that have made the stem of the pipe brown. Because the pipe is broken, you are able to see inside, and again there is the same brown discoloration along the smooth interior of this piece. The hole in the mouthpiece is notably very small, and if memory serves me correct, Professor Diamond said that you could not actually smoke out of this pipe. On one of the pieces, there is an impression of the initials “HG” on the heel, which signifies the Dutch pipe maker, Hendrik Gerdes.

Called a “little ladle” by the Elizabethans, the tobacco pipe was almost an essential piece of colonial living and there are clues that these pieces give us into the diverse community of Historic New Paltz. These pieces were discovered by Professor Diamond—a professor of archeology at SUNY New Paltz—and his team at Historic Huguenot Street on September 18, 2012. The pipe piece was discovered in a dig done North of the Freer house in “unit 215”.

During the 17th century approximately 1668-1685, Hendrik Gerdes, and Edward Bird were two prominent watchmakers. Bird, an Englishman moved to Amsterdam where he claimed to “fight for the Dutch”, there he met his future wife, Anna maria van der Deide. After Bird died, she remarried to Gerdes a competing watchmaker and confectioner (Bradley 111).

The heel appears to be a type 2 style heel, which includes a simple border around the initials. While this insignia is relatively simple, Gerdes did have another one that had a three-pronged crown above his initials. Besides New Paltz, his pipes have been found everywhere from Caughnawaga Mohawk in Canada to my birthplace of Staten Island. 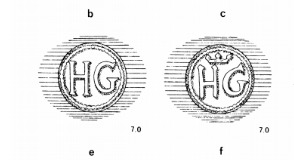 Two versions of Hendrik Gerdes makers mark, that would be found on the heel. Figure B is what is used on the pipe from Huguenot Street. Photo Credit: EUROPEAN CLAY PIPE MARKS FROM 17TH CENTURY ONONDAGA IROQUOIS SITES. 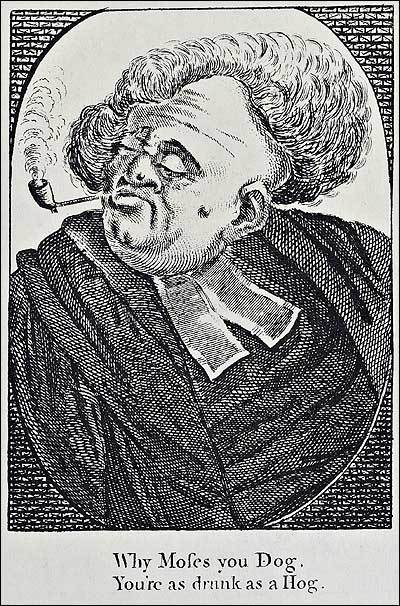 Cleric smoking a pipe with a shorter stem, which was used for easier handling.  Photo Credit: CW Journal

Although small, the initials can be easily seen on the pipe, upon further exploration we get the bigger picture. The look of the pipe itself gives insight as to the time period it was manufactured in, as well as where it originated:  “…Dutch pipe bowls were often cone-shaped rest backwards on their stems, and were often more highly polished. English pipes from that time period sat more upright, with a duller finish” (Tate). In a more general view, these clay pipes were extremely delicate. And although this particular make was made from clay, others were made from silver, brass or pewter. These typical 17th century, 11-inch clay pipes, if dropped would immediately fragments into six or seven pieces (Hume). A fact we see clearly, in the remnants of this piece.

These tobacco pipes were used as a form of trade in colonial times and tobacco itself was a huge sector of the economy, and was the main source of income for many colonists. These pipes were used in trades with Native Americans for furs and other local goods. And, although the pipes themselves were fashioned in Europe, tobacco was a product of the Americas, being first introduced into Europe in the mid-1500’s (Rafferty 146). Another interesting facet of this practice, was that by the 17th century tobacco spread amongst every race, class and gender. Upon doing further research I also found that women were active participants in the pipe making process. “Women have always been active in the pipe-making industry…as decorators and finishers, as pipe firers and proprietaries and as independent craft persons” (Rafferty 207). Although they were invisible to the public eye, women were very much a part of the process. For instance, Edward Bird pipes were signed with his initials “EB”, although that did not necessarily mean he crafted the pipe, it could have very well been his son or his widow. This becomes increasingly apparent when you consider that pipes with his “EB” engraving were still being made after his death. In addition to the pipe showcasing cultural assimilation, it is also representative of an early inclusion of women in economy. This holds true today, as women are central pillars of societies across the globe. For many communities they are the ones who start up their own businesses and support their families. Even in the small village of New Paltz, there is a strong presence of women in the community, as many own their own businesses along and around the bustling Main Street.

Although, I could not find anything specific on the owner of this pipe, I think the general idea of such an object is to see how a multi-faceted group produced such things. For New Paltz, this object of history can signify the early culmination of all different types of people. This pipe shows the melting pot that places like New Paltz had become during colonization. As we are aware, the French, Germans and English had settlements in New Paltz and most notably in Historic Huguenot Street. What is even more interesting is that despite the English conquests, Dutch pipes were still being imported and used. It’s interesting then, that we see a melding of cultures among the inhabitants of New Paltz at this time.

Although this pipe is seemingly just a vessel for tobacco, it represents a community on a much larger scale. It not only gives us context to see what life was like for the people before us, but also allows us to see how objects as mundane as a pipe could help weave the fabric of a community. It’s also quite striking to see, that many of the facets that this “little ladle”has proved to be so unique about it, are still relevant in our community today.