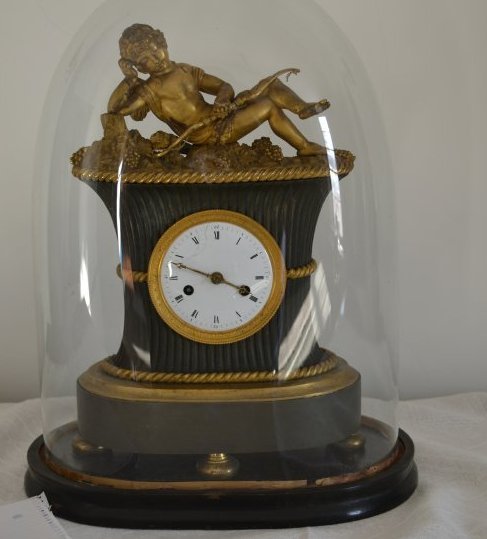 As baby Cupid rests on grapes and leaves, the United States has only just been born. This clock was made in 1788, and is a part of the Federal style, an artistic movement that impacted how architecture, furniture, and interior design styles were made. This clock would find its way into the home of Josiah DuBois, a Huguenot descendant and owner of an extravagant Federal inspired home. The house, as well as this clock, are representations of an attempt at creating a true “American” culture in the 1800s.

The clock contains several main parts: a wooden plate for a stand, the main section of the clock where the face sits, a golden Cupid laying in leaves and grapes while holding his bow and arrow, and a glass covering. The main section of the clock has wood detailing running down the sides giving the clock a textured feel. On the main section is, the clock’s face which uses Roman numerals and it is quite small in relation to the whole clock. The frame containing the face and Cupid is wood painted black with gold trim around it. Inside the main section are gears which are no longer functional. Cupid lays on top of the clock, lounging on golden leaves and grapes with his bow facing straight ahead. The glass is dome-shaped and covers the entire clock to protect it. The whole clock is approximately 13.5 inches high and 9.5 inches wide and is quite heavy to pick up or handle.

This clock is dated to 1788.   It originated from an apartment on Pine Street in New York City owned by a man named Samuel Boyd. Samuel Boyd is a bit of a mystery to us, records do not reveal much about him besides his residency in New Paltz. All we know is that this clock ended up at the Blake House, owned by William H.D. Blake, who died in 1926. The family continued to own the house and its objects until 1984 when the items in the Blake House were donated to Historic Huguenot Street. The clock now resides in the Federal Style Room in the Deyo House.

There are a few possibilities as to how Blake acquired this clock. According to the Historic Huguenot Street website, Matilda Blake was very close to her cousin Amy L. Hepburn, whose parents were named Samuel Boyd and Sarah Booth Hepburn, therefore making Samuel Boyd the brother-in-law to William and Matilda (Booth) Blake. Perhaps this is the Samuel Boyd from Pine Street who owned the clock, and William Blake purchased the clock from him or otherwise received it as a gift.   Unfortunately, it has been extremely difficult, to find evidence of this relationship because the name Samuel Boyd was extremely common. It could also be possible that the Samuel Boyd on Pine Street is a completely different person from William Blake’s brother-in-law, and that William Blake simply purchased the clock directly from this person or from an antique shop. 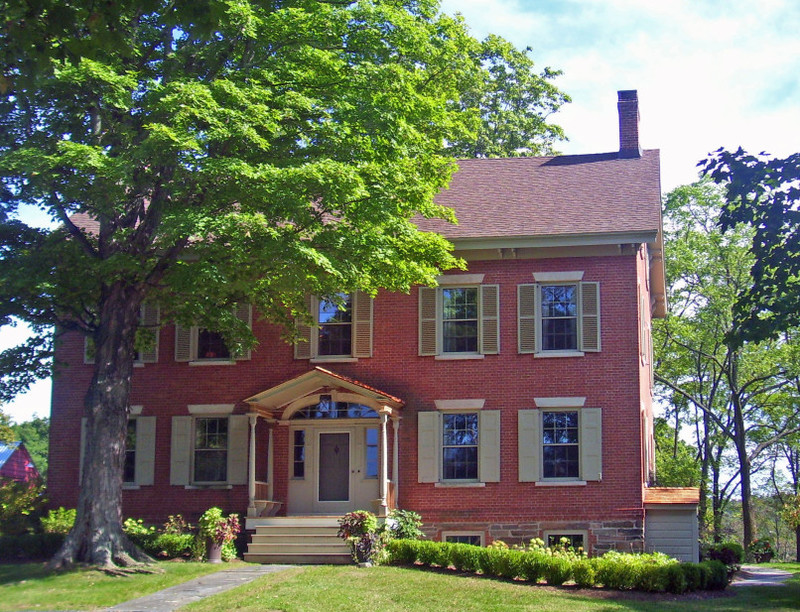 William Henry Dill Blake (1843-1926) was born in Montgomery, New York and served as an officer in the Civil War.   He married Matilda Booth in 1875 and together they had three children: Alfred Booth, William Culbert and Matilda. They moved to New Paltz in 1881 when Blake purchased the late Josiah DuBois’ house and 250-acre farm. He continued to live in New Paltz until his death in 1926. All three of his children graduated from the New Paltz Normal School and were heavily involved in the New Paltz community, especially his daughter, Matilda.

William Blake’s house is a story in and of itself and is important to understanding where the clock fits in. It was constructed in 1822 on a large portion of land owned by the DuBois family since 1677. This home was originally built by Pierre Deyo one of the Patentees of New Paltz. Later, Josiah DuBois owned and lived in the house until his death in 1869.   His daughter Elizabeth and her husband moved in the same year but only lived in it for twelve years until William Blake purchased it. The house has become a historical landmark in New Paltz because of the property’s tie to the original Huguenot settlement and the Revolutionary War. The house was constructed in the Federalist style of architecture in order to emulate a unique “American Style”, this was a large aesthetic jump from many of the traditional dutch stone houses that make up Historic Huguenot Street. The use of the Federal style works perfectly with the clock displayed in the house. 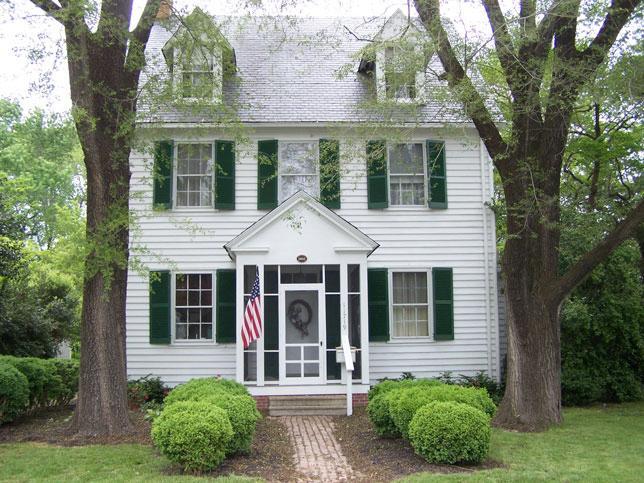 The Federal style was a movement in the three decades following the inception of the United States. The Federal style was largely influenced by the developing system of government,   and the style itself served as a way for the newfound United States to create its own identity. A prime example of the Federalist style is the White House, which has come to be a symbol of America and American identity. In addition, Neoclassicism, or a revival of ancient Greek and Roman art and culture, also heavily influenced furniture in this period, (think of the pillars in front of the white house and large elaborate entrances). A roman influence would explain why the clock contains Cupid as its focal point. Federal style furniture was often comprised of thick, dark wood, simple designs, and marble. Although elements of Neoclassicism (a relatively European movement) existed in the Federal period, the style marks the beginning of a distinct American culture. It is interesting that Josiah DuBois would choose this style for his house and William Blake would choose to maintain it.   The DuBois family were part of the original twelve French

Huguenot settlers in New Paltz and brought their European culture and traditions with them when they emigrated to New Paltz in the 1600s. The property they owned still contains several older structures, including a 1775 Dutch barn.   It is as though DuBois and Blake, like much of America at the time, were attempting to erase their own histories and ascribe to the new “American” story that was emerging through creating and preserving this Federal style.