The History Behind the Stone Walls 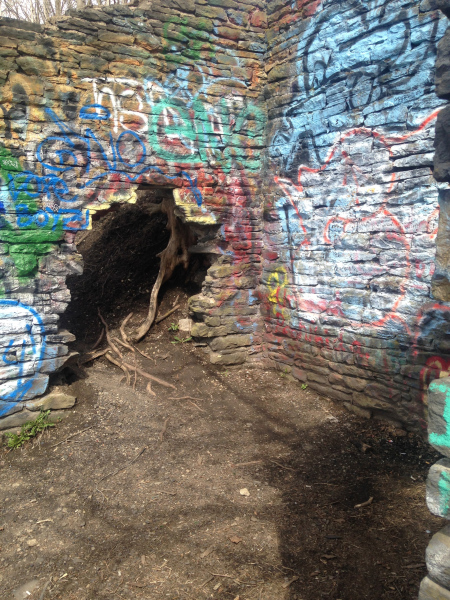 You’ve all seen it. That dilapidated stonewall that lies along the banks of the Wallkill River. Freshman and tourists walk by and wonder: “What the heck is that?” While seasoned SUNY New Paltz students use it for their smoke circles and hangouts, it is also a local landmark hidden by graffiti and age. Upon entering the New Paltz section of the Wallkill Valley Railtrail, walkers, runners and bikers pass this crumbling stone structure without any thought of what it might have been. The once closed structure now consists of only three walls. Any foundation that might have been there centuries ago is now dirt and leaves. The wall that once faced the Wallkill River is now nonexistent. What’s left of the structure is now covered in graffiti from the various decades of rebellious hippies and risky students wanting to leave their mark on the town. What they didn’t know was that the neglected stone that they were defacing was actually centuries old and built by two of the founding families of the town of New Paltz.

On this plot of land, the Elting family built a steam mill equipped with various warehouses and outbuildings, including the tool shed. For the first century or so after the purchase, the Elting family successfully ran their factory here. However, when the business failed in 1894, A.P. Lefevre bought the steam mill property at an Elting Real Estate Sale (Village of New Paltz). The Lefevres retained ownership of the property until 1986, when most of the buildings were sold and demolished.

Studying the old maps of the Village of New Paltz shows us that the structure was once a tool house, however, it neglects to detail whose tools it held. One possibility is that it was used by both the Elting factory and the later Lefevre family business that stood on the opposite side of the train tracks. In 1748 Noah Elting, in conjunction with Nathaniel Lefevre, gained ownership of 3,000 acres of land “lying on both sides of the Wallkill” (Lefevre 485). On this land, the Elting family built “Elting & Son”, a steam mill consisting of an icehouse, two lumber sheds, the flour mill, and a coal shed that was shared between the factory and the neighboring trains that ran along the Wallkill Valley Railroad. 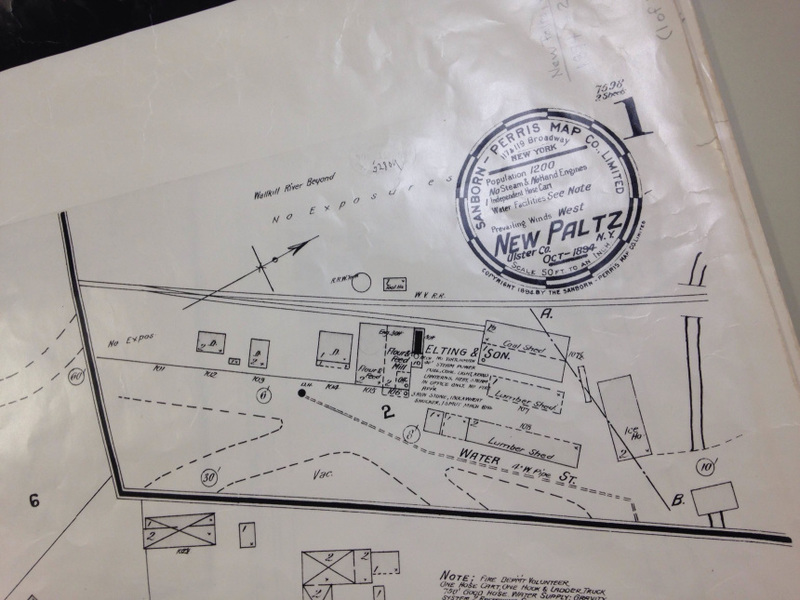 The family ran the steam mill and New Paltz’ one and only canning company until the business failed in 1894 (Village of New Paltz). Upon the failure of their business, the Elting family delegated ownership of the factory to the assignee A.K. Hays of Walden (Lefevre 485). For the next two years, Hays ran his barrel crafting company out of the factory and continued to utilize the far off tool shed on the other side of the tracks. Then, in 1896, the Elting family was forced to sell their properties—including the steam mill—in an estate sale. At this sale, A.P. Lefevre purchased the property as a second location for his established lumberyard and hardware company (Village of New Paltz). 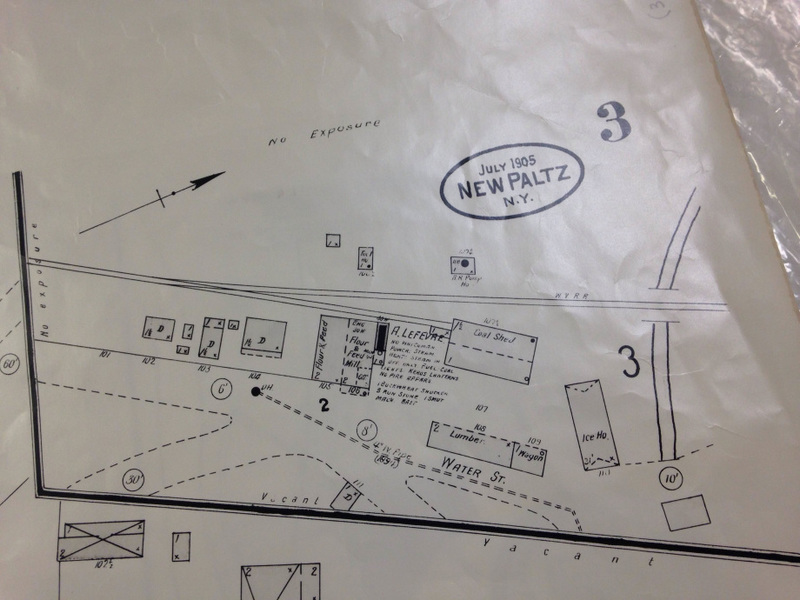 The 1905 map of the village shows that after taking over the farm A.P. Lefevre and Sons Lumber and Hardware Company cleared out some of the buildings from the original Elting factory and added new spaces for their different business. However, the tool shed remains standing on the other side of the train tracks. In 1907, Lefevre rented out part of the coal shed to D.C. Storr’s Concrete Block Company, which allowed him to then build up the residential areas of New Paltz (Village of New Paltz). Storr built almost all of the cottages that still remain standing on Oakwood Terrace and Manheim Boulevard. 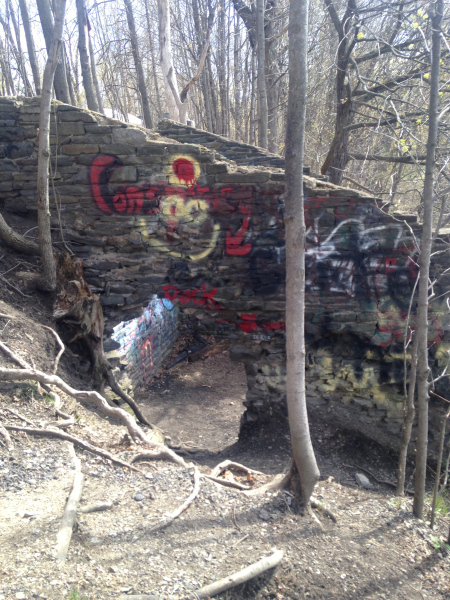 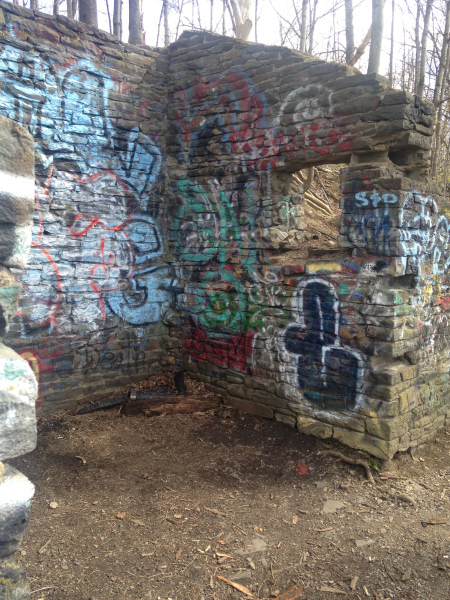 As if this was not enough, Storr also donated land for St. Andrew’s Episcopal Church, built a windmill to supply the residents of the village with fresh water and erected entire new streets and walkways. Working out of the Lefevre’s coal shed with tools from the tool shed on the other side of the tracks, D.C. Storr modernized the village of New Paltz and turned it into a living destination for both students and families alike. For more than 70 years after initially acquiring the property, the Lefevres lumber business continued to thrive at their location alongside the Wallkill Valley train tracks.

The tool shed also remained as a part of the property throughout the changing businesses and was continually shared with both the Wallkill Valley Railroad and the Consolidated Rail Corporation who continued to make stops to the lumberyard even after the closure of the New Paltz Train Station in 1959 (Mabee and Jacobs). This dilapidated structure that continues to stand along the banks of the Wallkill River has watched many businesses come and go. The stones in those three remaining walls watched over the course of centuries as the Eltings ran New Paltz’ one and only canning company until it folded, the railroad companies stopped coming through town, the Lefevre family ran a successful lumber yard and D.C. Storr built half of New Paltz with concrete.

Today, students, residents and tourists alike pass it by while walking along the Wallkill Valley Rail Trail. After sitting abandoned for years, plans were launched to turn the rail road tracks into a “linear park” (Wallkill Valley Rail Trail Association). Volunteers worked together to clear the brush, smooth out paths for hiking and biking and repair the various bridges between New Paltz and Gardiner. After over a decade of hard work, the trail officially opened in 1997 (Costantino)

When it first opened, it stretched along the river from the Village of New Paltz to the neighboring towns of Gardiner, Rosendale and Kingston (Mabee). In recent years, the Wallkill Valley Rail Trail Association has been rumored to be working to connect with the Dutchess County Rail Trail, which would connect New Paltz to the other side of the river. All the while, the volunteers have been passing by this abandoned structure that stood beside the trail and the Wallkill River. That graffiti covered and forgotten tool shed watches as the current residents of New Paltz pass it by and completely overlook the centuries of history hidden behind its neglected stones. 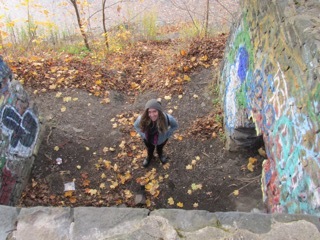 Lefevre, Ralph. History of New Paltz, New York and Its Old Families (from 1678 to 1820): Including the Huguenot Pioneers and Others Who Settled in New Paltz Previous to the Revolution. Fort Orange Press, 1903.