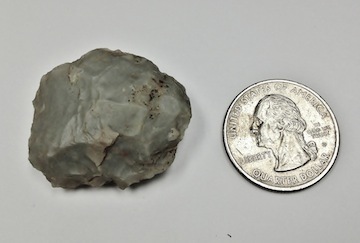 Front of Stone Knife in reference to a Quarter (photo credit:Â Alexandra Nasar).

This Native American stone knife, among other stone tools, was essential to the survival and development of the Lenape civilization.   It may seem insignificant, but tools like this were used throughout Native American history, and it is even more effective in strength and sharpness than our steel knifes today.   Because its exact date is unknown, this object speaks for centuries of history in New Paltz.

The stone knife measures around 3.5 cm by 2.6 cm by .8 cm.   It is known as a cryptocrystalline lithic, and is made out of chert–either Eppler or Harmonyvale–which is a fine grained sedimentary rock commonly used for tools by Naitive Americans.   It was sharpened by a chipping flint, a similar but higher grade rock than chert which commonly occurs in chalk and limestone formations, and the small sharp pieces could very well have had their own uses.   It is a milky white/grey color with tints of green, has percussion marks, and appears to be flat. It is temporally non-diagnostic, which means it could have originated anywhere in the timespan from 7000 BC-1678.

This artifact was found by archeologists in New Paltz on July 27, 2002, on Historic Huguenot Street around the corner between the Jean Hasbrouck house and the Deyo house.   It finally ended up in Dr. Joseph Diamond’s collection where it remains among several other historical and Native American objects found in New Paltz.

Back of Stone Knife in reference

Native Americans from anywhere between 7000 BC and 1678 could have used this helpful object.   It is possible that it was much larger than this and chipped with age, or that it was made to be small for finer work.   Perhaps it was from the earlier time periods before the Dutch came to settle in the area near Huguenot street. The Native Americans, particularly Munsees, had many stone tools like this.

"Munsee" is a self-labeled name by the Native Americans, and the Munsee people were a subtribe of the Lenape.   They were the most warlike of the tribe and had many leadership positions in the Lenape society. They were prominent in the early history of New York and New Jersey and were among the first tribes in the region to meet with European immigrants.   The clans of the Lenape people shared their land collectively, and they used it for hunting, fishing, and cultivation. The clans lived in fixed settlements and used their land for survival until its nutrients were exhausted. They developed sophisticated techniques for moving or trading land, and for hunting and managing their resources.

This knife would be used to cut meat, vegetables, string, or to create sharp flints. These knives were still widely used even after Native Americans came in contact with Europeanean tools and metals. In trade, land was exchanged for, various metals, tools, industrial products, and alcohol.   Some of these new objects were significant aids to their development but were also the catalyst to their demise. This particular knife is significant to New Paltz history, as it encompassed the lives of the Native Americans who once lived here. This item is indicative of how they used nature and what was around them to create sustaining lives and culture. 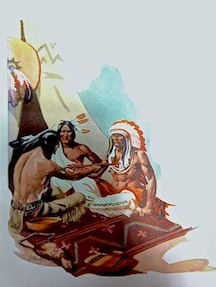 Because the exact date of this knife is unknown, it encompasses the entire Native American history on the land of what is now Huguenot Street, where it was found. The history of this time span is extensive and takes us back from the beginning of the Native American culture in Munsee country to their demise at the hands of European settlers due to war, and disease. The knife could have originated anywhere from 7,000 BCE, to as long as 10,000 years ago. This is very early in Native American history when people belonging to “archaic cultural traditions” began hunting small game like deer and gathering plants more intensively in the Northeast (Grumet, 232).   Between 4000 and 1000 years ago, Native American civilizations began to emerge, and technological innovations such as pottery, bows and arrows, longhouses, and vegetable cultivation were developed.

Around 500 years ago Europeans began sailing to northeastern North American shores, and by 1607, according to archeological records, the total Indian population in Munsee country may have been as large as 15,000 people.   By 1664 the Indian people living in Munsee country were reduced to less than 3000 as the colonial population in the New Netherlands reached 9000. The Dutch then signed a treaty ending a war with the Esopus, and New Netherland falls to an English fleet and is renamed New York.

Perhaps this object contains the more peaceful beginnings of this account of Indian history at New Paltz, being used and reused by a tribesman or woman to cut various meats, vegetables, and to fashion tools and other creations.   Maybe it was tossed in favor of a bigger stone that would serve more cutting purposes, or it was lost on a hunt, slipping from the strong man's hands with no time to look back. Maybe it was thrown in a desperate attempt to flee or fight as the European settlers destroyed Native American villages.   It is mutually possible that it was one of the most important objects to a person’s life, as an essential key to survival, or the last thing on that person’s mind as his or her very way of existence was being changed and shaped. This small, seemingly insignificant stone knife holds in its mystery the entire Native American history here at New Paltz.