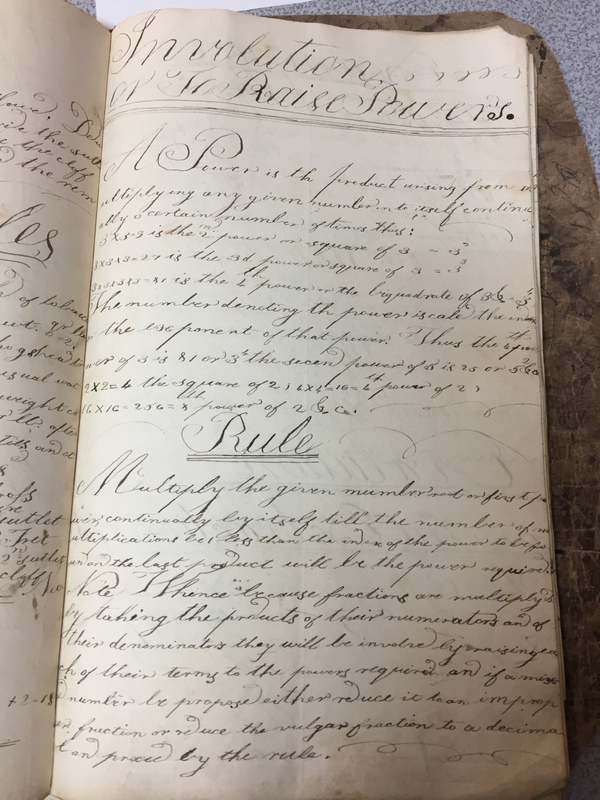 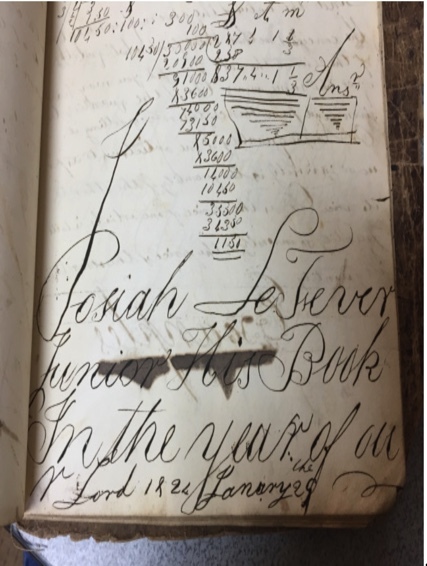 Historic Huguenot Street defines cipher books as, handwritten workbooks that were used by students in the first iterations of schools, in New Paltz. These workbooks were used to learn mathematics, handwriting, spelling, and other disciplines. Most of these books are from the early 19th century and were bound in cloth which feels like slightly thick cardboard, and has begun to brown with age. Many of the other books are made with leather or board. The pages have begun browning and many of them are stained from water, and the bottoms are worn with age. The majority of the books contain entries in English, French, and Dutch. The math problems in the books are generally simple, such as addition, subtraction, measurement, and problem-solving with several different currencies. As the pages go on, the mathematical operations become more complex with application problems, proportion, interest, decimals, fractions and more. Some of the application problems referred to American historical events such as wars and Columbus' arrival to America. Religious and moral lessons, along with simple doodles were written throughout the books. 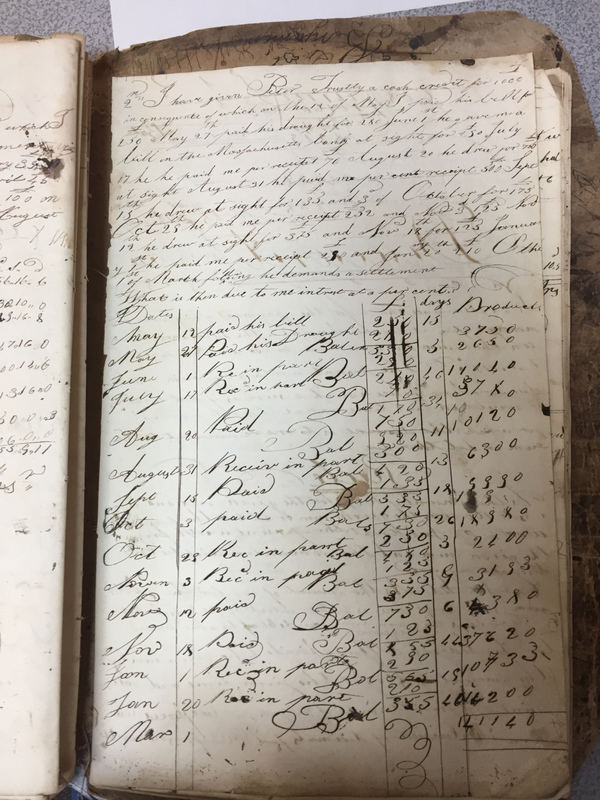 In order to fully understand these books, I had to first understand how schooling in New Paltz functioned in the early 19th century. I turned to, In a Valley Fair: A History of the State University College of Education at New Paltz, by, Elizabeth and Robert lang. The first few chapters of this book explain that the Huguenot landholders hired Jean Cottin as their headmaster when they settled in New Paltz in 1689. The school was connected to their church, so headmasters were only hired if they were deemed a good man, teacher, and true Christian. During the early order from the Classis of Amsterdam, schoolmasters in the Dutch colonies instructed their pupils not only in reading, writing, ciphering and arithmetic but also in the customary form of prayers. This would explain the religious writings doodled in the margins of some of the cipher books. There was a religious mantra that was spotted in some of the cipher books, including in DuBois’ cipher book, which I will touch on more later on. 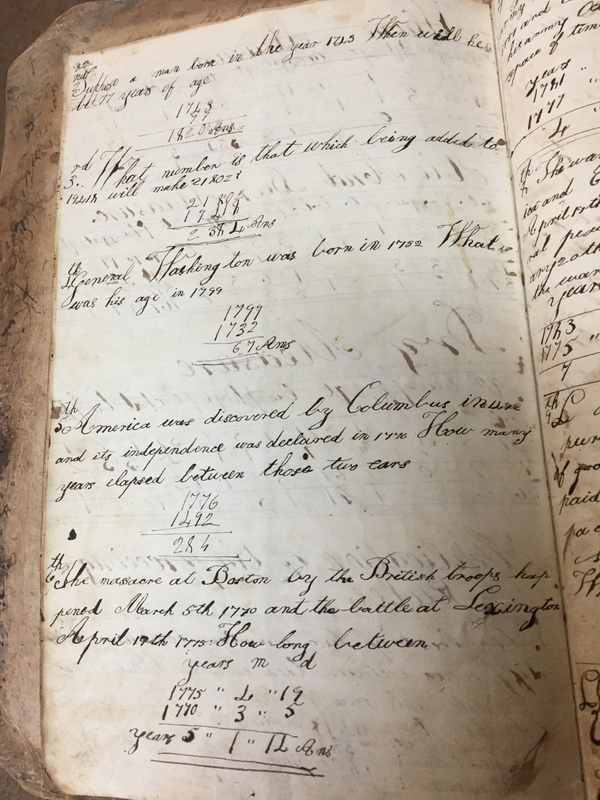 The school curriculum in 1812 was limited, so it was mostly reading and writing. By 1827, subjects such as math, grammar, and geography became the common branches of public education. In 1828, a group of leading citizens founded the New Paltz Classical School, which began its sessions on the second floor of the Common School. The classical school was meant for the upper class, the original families funded this school and this is where their children went (Deyo, Dubois, Elting, Hasbrouck, and Lefevre). Those who attended the classical school paid more money and were taught Greek, geography, history, natural philosophy, and math. Those in the regular English schools were taught grammar, French, reading, writing, arithmetic, bookkeeping and elocution. Education in New Paltz in the late 18th/early 19th centuries was largely focused on business and commerce and was tied in with religious rhetoric. These next two ciphering books will demonstrate this in various ways.

According to Historic Huguenot records, Josiah LeFevre—the first owner of this book—was born August 10, 1811 and died December 15, 1888. He married his first cousin, Elizabeth Lefevre and had eleven children, 4 of whom did not survive into adulthood (Peter and Josiah P. Lefevre Family Papers). On the left side of the first page of the cipher book, he writes “last of May or the first of June; May 31, 1822” and on the other, he writes “Josiah LeFevre his Cyphernbook May the 28th 1822 Tuesday. The arithmetick Printed By Nicoles Tike in the year 1809.''. It is not clear who Nicholes Tike was Maybe he was the author of the workbook Lefevre’s was copying problems from. The cipher book starts off with easy mathematical operations and then they get more complex. 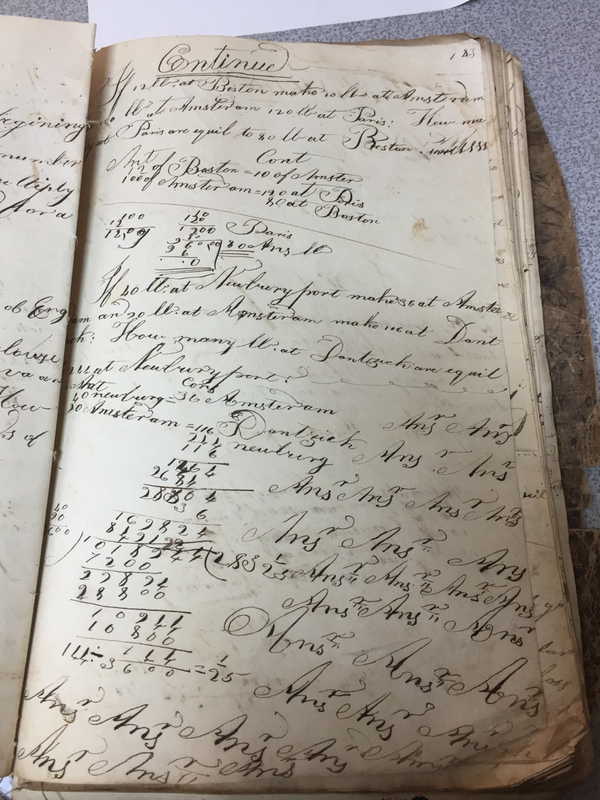 Their long division looks like what we currently learn in schools except they had lbs:g:lbs on top of the equation. Whenever Lefevre starts a new concept, he defines it and its many rules before creating word problems for the concept. As I continued flipping through the pages, I noticed that their application problems were focussed on purchasing and commerce. “By inventing the order of the _____, it will be 2^n. If ____ (illegible handwriting) buy all of sugar, how much will ___ buy at that rate?”. There were other word problems that spoke about picking up pounds at certain ports and delivering it to other ports for certain rates. These math problems illustrate the business and commerce life that students Josiah’s age were learning in school. There were also application problems involving our past history. One word problem said, “America was discovered by Columbus in 1492 and its independence was declared in 1776. How many years elapsed between those two years?”. The next word problem mentioned the Boston massacre and the Battle of Lexington.

There were also doodles throughout Lefevre's cipher book sometimes just his initials, or small designs. At one point, he wrote the word “Ans” 32 times halfway down the bottom right side. Josiah also kept records of people who paid him for their bills through their bank accounts. It’s very detailed and it runs on for half a page with a chart. Josiah also compared federal money and English money as examples to a new concept. Halfway through the cipher book, there were two pages of different measurements of products: ivory weight, avoirdupois weights (a system that uses pounds and ounces), apothecaries weight (pharmaceutical measuring system), cloth and long measure, and time. The next two pages had land, square, solid, hhine, hole and beer, and dry measures. These track the different ways people in the colonies measured the goods they traded and sold. The second cipher book is very similar to Lefevre’s, so it is possible they were in similar grade levels or schools. 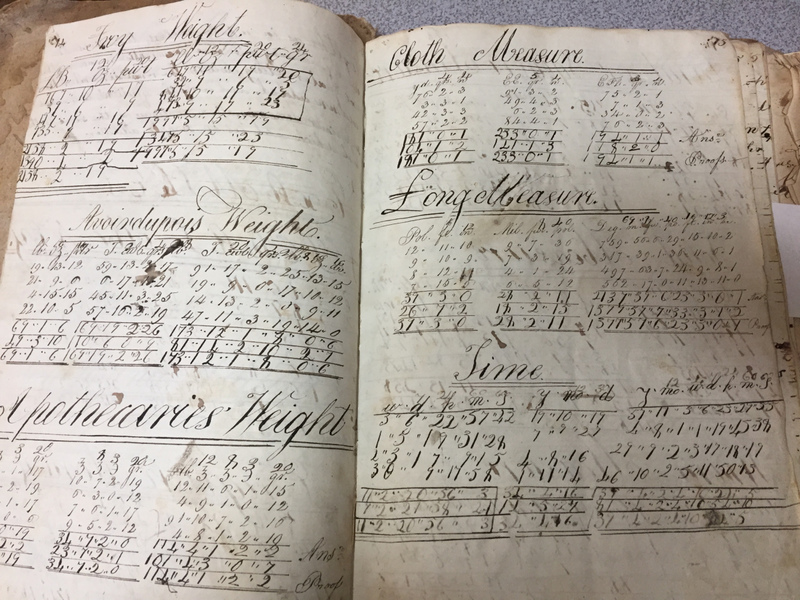 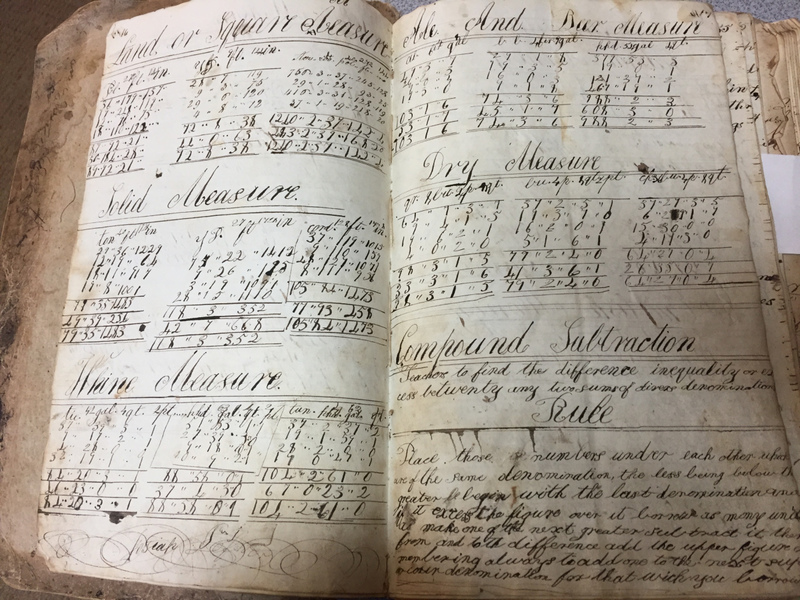 The second cipher book was written by Josiah DuBois in 1792. He was born on December 12, 1779, was baptized in at the New Paltz Reform Church on January 3, 1782, and died in 1867.  He married twice and had many children. DuBois was very successful in his early mercantile days and resumed the agriculture upon his ancestral acres, and lived for many years. He carried out his business in what is now the Jean Hasbrouck Memorial House, in partnership with Col. Josiah Hasbrouck (Josiah Dubois Family Papers). DuBois was one of the original trustees of the New Paltz Academy and one of the owners of the Academy grounds. DuBois started his cipher book with the written words, “Numeration; August 20, 1792; Teacheth to read, Write, or Corprefs, any Number or turn proposed”. He then drew the place value chart up to “hundreds of millions”. At the bottom of the first page, he wrote, “Josiah DuBois is my name, America is my Nation, New Paltz is my dwelling place and Christ is my Salvation,When I am dead, and in my grave and all my bones are rotten, when this you see remember me that I am not forgotten”. Unfortunately, the rest of that message was crossed out and doodled on top of and illegible. His message illustrates how closely tied the church is in all aspects of his life. This religious mantra appears in other, similar cipher books, which leads me to believe that this was a standard part of the curriculum. 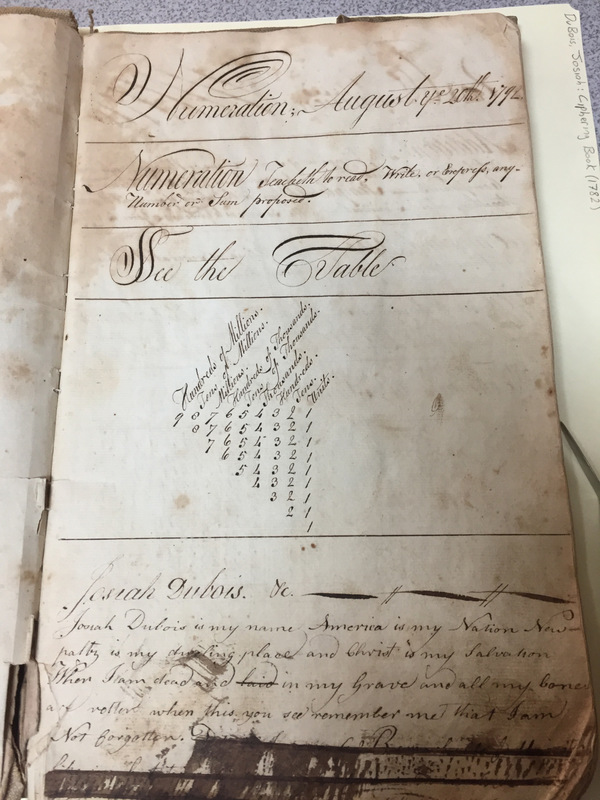 DuBois’ cipher book was similar to Josiah Lefevre’s book, except DuBois’ book focussed on the selling of goods such as cloth and food, while Lefevre’s book emphasized the movement and value of money as part of the business. In Dubois’ cipher book, there were word problems about buying or selling things such as dog buttons at 3/6’/4 per dog. The problem asked DuBois to find the price if he were to buy the whole. He also had two pages full of what his customers bought on a specific day. He had six different categories for who bought what. He had someone who was a cheesemonger, milliner, carpenter, and baker. For example, he recorded all the products that Thomas Hantloy bought on May 19, 1793. The list consists of “raisins of the sun, Malaga baifins, currants, sugars, sugar loaves, rice, black pepper, and gloves”. Another interesting thing I found in Josiah DuBois’s cipher book was two poems on mathematical roots such as squared or cubed. One poem had 14 lines and the other had 20 lines, but both followed an aabbcc pattern. The first poem doesn’t make any sense no matter how many times I read it, however before the poem, Dubois wrote at the top of the page that this poem was a “Rule to be got by heart”. I can only assume he means they must memorize this poem to help them understand the rule to the concept of roots. As for the second poem, the first three lines says, “The cube of your first period take/And of its root a Quotient make/Which root into a cube must grow/And from your period taken fro, To the Remainder then you must”. This appears to be a way students were taught to remember rules and concepts for math. The last interesting thing I found towards the end of the cipher book was a Mariners Compass. According to Webster Dictionary, a Mariners Compass is a navigation compass that consists of magnetic needles permanently attached to a card that marks the direction and degrees of a circle. Josiah DuBois wrote down numbers related to the climate between the Equator and the poles using the compass. 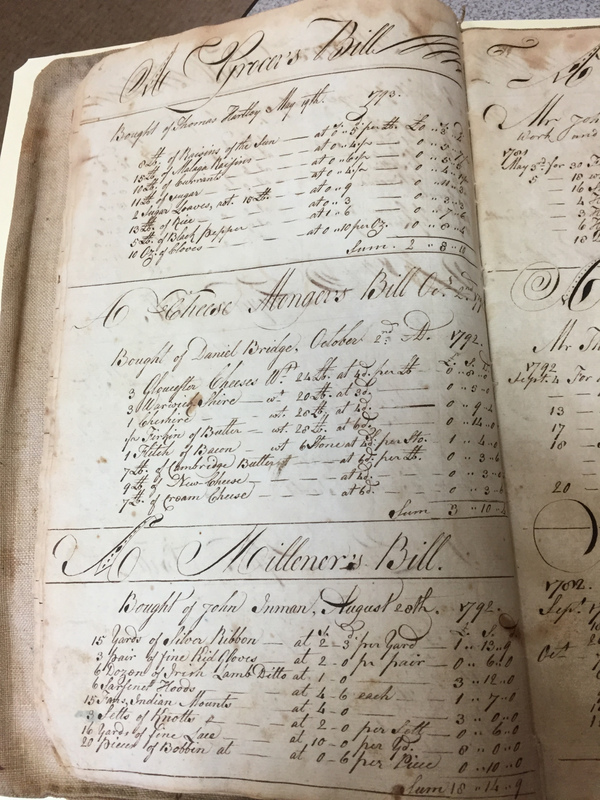 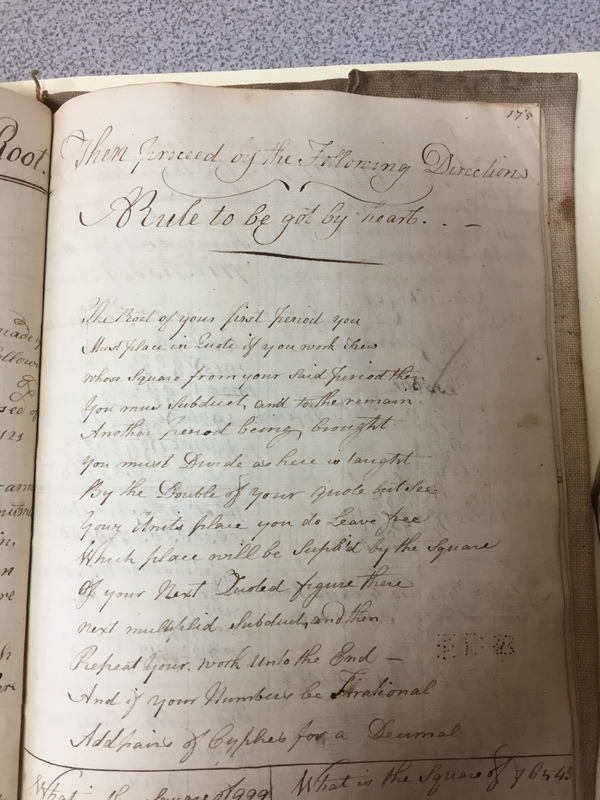 Poem on the rules of roots.

Overall, both Josiah Lefevre and Josiah DuBois’s cipher books had many similar writings and methods to their education. I conclude that it was possible they could have been in similar school grades because the math was so similar. Josiah Lefevre’s education was more focused on the business aspect of commerce, while Josiah DuBois’s education seemed to be more focused on the actual goods they were selling. By looking at workbooks like this, we get a unique insight into the mind of a child. It is also fascinating to see the methods they used in education and how it is compared to today.