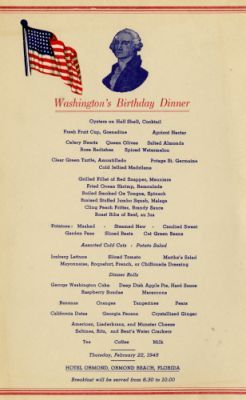 This World War II-era menu, although not elaborate, is patriotic in tone. Printed in blue and red inks, the menu features red stripes, a portrait of George Washington, and a sticker of an American flag. The menu includes a Martha's salad and George Washington Cake, as well as a very American deep dish apple pie.

THe Hotel Ormond was a popular winter resort in Ormond Beach, Florida. Built in 1887, it was soon after purchased by Henry Flagler, an industrialist and developer of most of the Atlantic coast in Florida. The heyday of the hotel ended in the late-1930s, but it continued to entertain guests who were escaping the winter months up north.