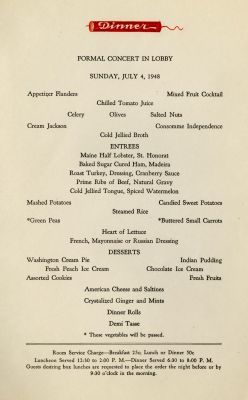 This menu has an abundant display of symbols associated with the Fourth of July. A golden eagle atop a liberty bell and four American flags are on the cover and, in blue ink, an eagle with wings spanned atop a crest is on the first page (both symbolic of the patriotism of the holiday). On the menu itself is a red firework and an announcement of that evening's formal concert (music and fireworks, both symbolic of the fun, entertaining ways in which the holiday is celebrated). Dishes on this menu include consomme Independence, cream Jackson, and Washington cream pie. Entrees include Maine half lobster, baked sugar cured ham, roast turkey with dressing, prime ribs of beef, and cold jellied tongue. Not bad choices for a summer dinner in Ocean City, New Jersey in 1948!