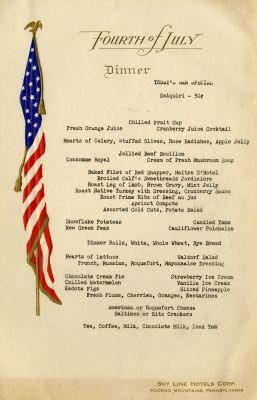 This undated Fourth of July dinner menu for one of the Sky Line Hotels in the Poconos features an embossed American flag, the true symbol of this holiday. Upon Independence from Great Britain in 1776, the new Congress passed a resolution to establish an official flag of the new United States with thirteen stripes and thirteen stars. The history of the first flag is still clouded in mystery and controversy (recall the Betsy Ross legend?). It wasn't until the War of 1812, when it was popularized by Francis Scott Key's Star Spangled Banner, that the American flag truly took on its importance as a national symbol.

The menu bears none of the patriotically-named dishes as seen on the other Fourth of July menus shown here. That said, diners were offered a featured drink: "Today's Bar Special - Daiquiri 50c."