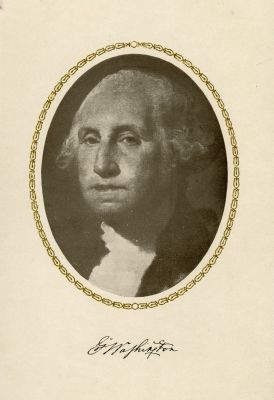 Washington's birthday is not usually a holiday centered around food.  Today, the observed federal holiday, President's Day, closes schools, governement offices, banks and post offices, but offers little more than a chance to catch up on sleep and go shopping. But these menus from the first half of the twentieth century imply that it wasn't always such. Washington's birthday was once celebrated with elaborate dinners and fancy balls and patriotic toasts to our first president.

This set menu for a "Dinner Dansant" at the Belleview Biltmore in Florida took place on the eve of Washington's birthday. An oval bust-length portait of Washington is on the cover, red and blue stripes are on the fold, and the menu is bound with a red, white and blue cord. The menu begins with a soup in honor of the celebrant: cream of chicken Washington. The entrees are filet of pompano poche bonne femme, filet mignon of beef saute Bearnaise, and roast jumbo squab au cresson.