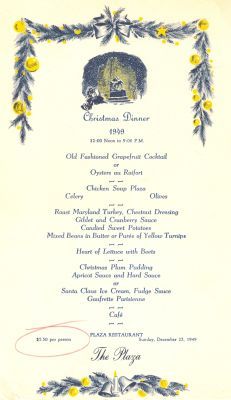 This Christmas dinner menu for The Plaza Hotel in 1949 is printed on a single sheet decorated with blue garland and bells, and yellow ornaments. At the top is an illustration of two well-dressed figures looking at a snowy night scene of New York City with an equestrian statue set against a glowing Plaza Hotel. The monument depicted is the Sherman Memorial by Augustus Saint-Gaudens, located in Grand Army Plaza. General Sherman is seated atop his horse while a figure representing Victory is at his side.