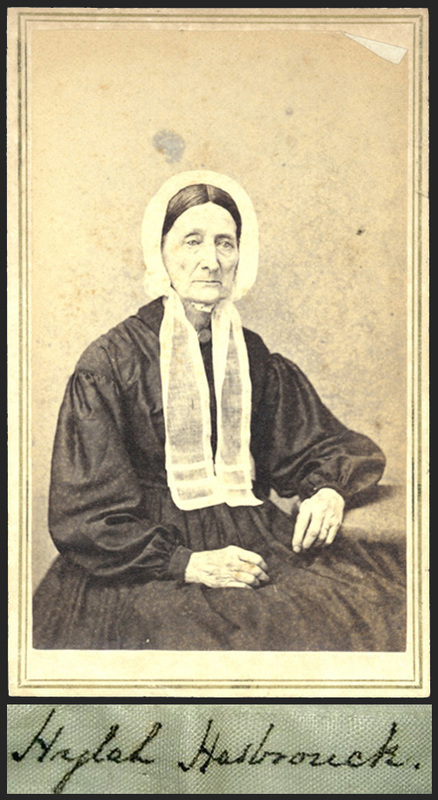 Hylah Bevier was born on August 31, 1795 in the town of Rochester, Ulster County, N.Y. Her father Captain Philip DuBois Bevier served with distinction during the Revolution. In 1782 Philip married Ann DeWitt, daughter of Petrus DeWitt and Rachel Radcliff. The couple had eight children. Hylah and her six sisters and one brother grew up in a prosperous, orderly household. Their mother was an astute, independently minded woman who successfully managed the family farm and other business concerns after her husband’s death in 1802. Sometime around 1811 (or possibly before), Hylah was sent to The Litchfield Female Academy, in Litchfield, Connecticut. Here she was enrolled into a full curriculum that combined academics with classes in household management, music and the decorative arts. In 1821 at the age of 26, Hylah Bevier married Levi Hasbrouck. She and Levi raised four daughters and one son. Hylah Bevier Hasbrouck was 78 years old when she died at Locust Lawn in 1874.

“The characteristics of Mrs. Hasbrouck’s life were strongly marked and easily understood by all who came within her influence. With intense earnestness of purpose, she combined a singular clearness and force of intellect which would have given her a leading position in any society in which she might have mingled. When to these were added the power of wealth and family position, all around her felt that hers were an influence which no other could wield.”