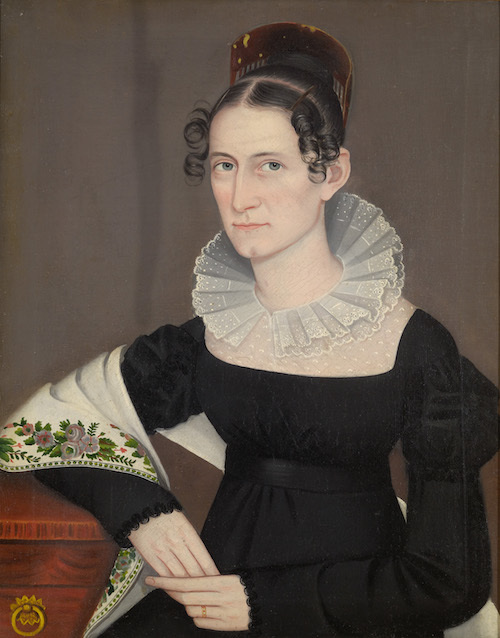 Black and white photograph of Hylah Bevier Hasbrouck's three-quarter length portrait painting by Ammi Phillips. Hylah is wearing a high tortoiseshell comb, a black empire dress, a ruffled lace collar and has a white shawl with a purple flowered border around her arms. A side table made by John Banks, which is in the collection, can be seen in the bottom left corner of the portrait.;.

"Ammi Phillips began his professional career around 1811. He traveled extensively in the New York - Massachusetts - Connecticut border area, and because of this, became known as "Border Limner". He married Laura Brockway in 1813 and the couple moved to Troy, New York. At some point they moved to Rhinebeck where his wife died in 1830. He remarried shortly after. Around 1829, he started painting in a new style. The works from this period were from his "Kent Period", named thus because that was the town in Connecticut where the paintings first surfaced. He probably did the paintings in New York's Duchess County. He returned to western Massachusetts in 1860 where he died five years later 's occupation was listed as a "portrait painter." 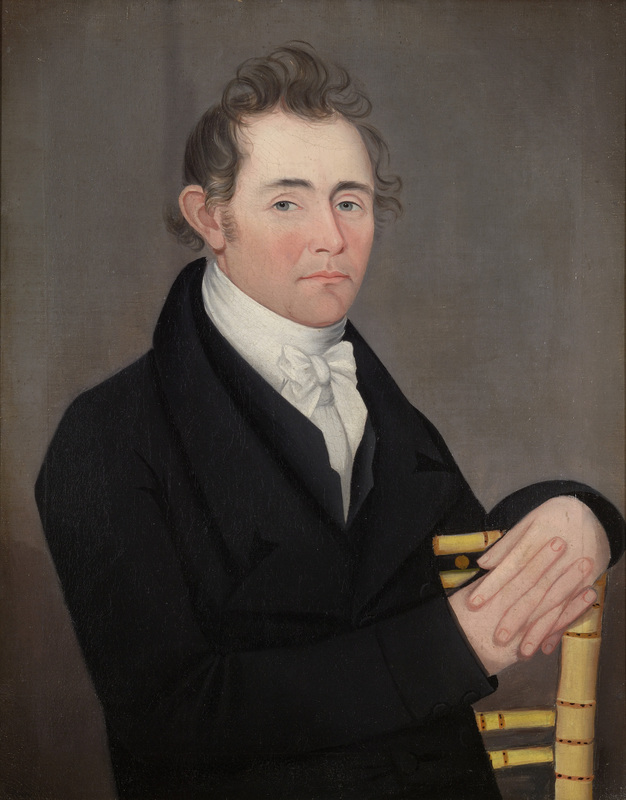 Levi Hasbrouck is seen resting on a yellow and red painted faux bamboo chair. He has brown hair and is wear a dark jacket and vest with white shirt and cravat. 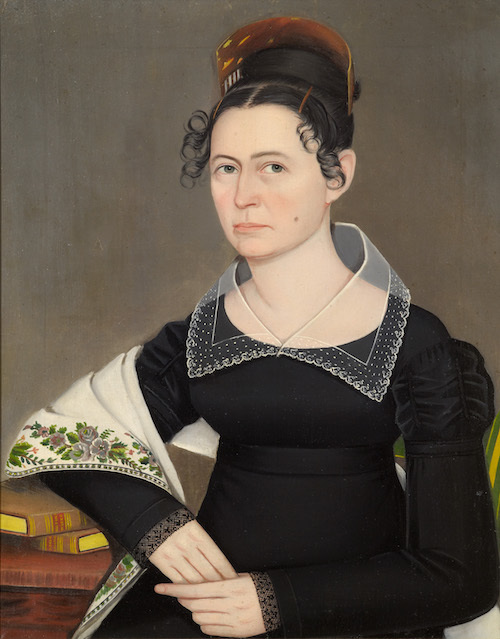 Born January 8th, 1785 to Ann Dewitt and Philip Dubois Bevier, Esther Bevier was one of their eight children and a member of one of the most well-known, influential families in Ulster County in the 1700 and 1800’s. Along with her six sisters, Hylah, Sarah, Henrietta, Anna Maria, and Elizabeth, Esther attended the Litchfield Female Academy around 1800 where she studied needlepoint, among other subjects.

When Esther’s father died, he left in his will that his son, Louis Bevier III was to go to school for a subject of his choosing. However, he never made any mention of educating his daughters. Despite this, Ann Dewitt Bevier sent all seven of her daughters to school, insuring their ability to carry on the family’s prosperity. The Litchfield Female Academy, located in Connecticut, was opened in 1792 by Sarah Pierce and was the premier school for women at the time. At Litchfield, the notion of “Republican Motherhood” was stressed. This was the philosophy that women have the greatest influence on children while they’re young, and therefore need to be educated so that they may help their children understand how to vote and live in the new republic. Here, women primarily learned about how to do needlepoint, history, and arithmetic.

In 1811, Esther married Philip Hasbrouck, merging the two powerful families. Though they had no children, their legacy is carried on in different ways. For example, there is a famous portrait of the two done by Ammi Philips located at Locust Lawn. Philip also built a frame house (a symbol of wealth) for Esther located west of Forrest Glenn, on the Wallkill, across from Guilford known as the “White House Farm.”  It is most famous now for its celebrity owner, Robert DeNiro. 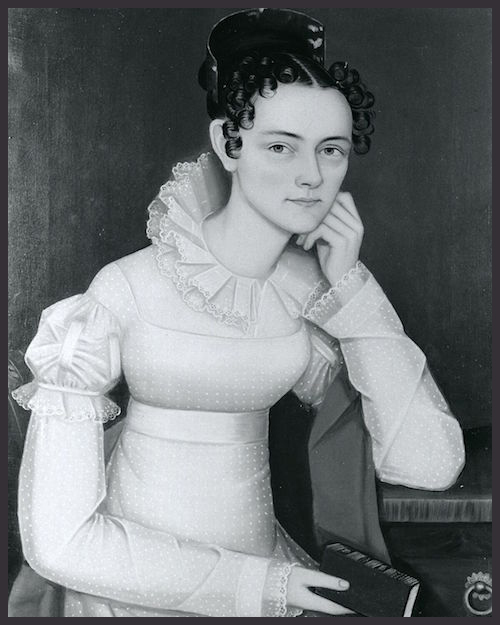 Maria Eliza Hasbrouck is painted holding a copy of Lady of the Lake by Sir Walter Scott (1771–1832), the source for the needlework picture entitled Blanche and Fitz James 1813, worked by Hylah Bevier at the school and now hanging at Locust Lawn. Several Hasbroucks (including a Maria), listed variously as from Fishkill and Kingston, New York, attended the school in the second decade of the nineteenth century.

"Maria Eliza Hasbrouck married Christopher Reeve (or Reeves; 1798–1865), whose uncle, Tapping Reeve (Tappan Erastus Reeve; 1745–1823) had founded the Litchfield Law School in 1784. So it may be that Sarah Pierce’s school is a source of previously unknown connections among sitters for Phillips portraits." A brilliant format Ammi Phillips's Women in White, By Joan R. Brownstein and Bobbi Terkowitz 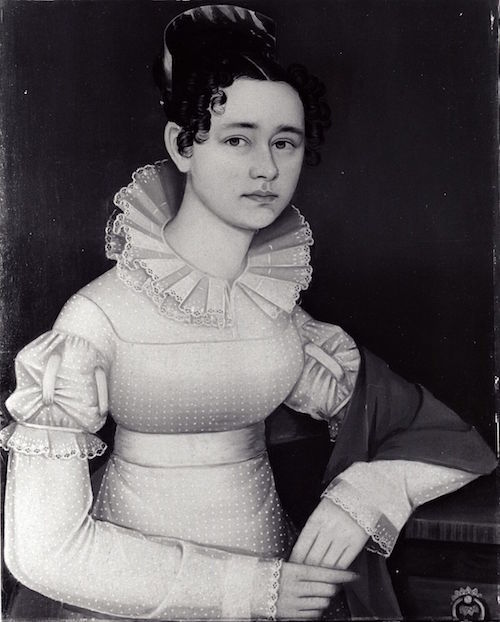 Sarah Maria Dubois was born in New Paltz on November 6, 1806 and died in Ohio on April 23, 1893. She married the Rev. John Smith Easton (1806-1869) in 1826 and later moved to Ohio. Sarah is the daughter of Josiah Dubois (1781-1869) and Elizabeth Hasbrouck (1785-1815). A painting of Elizabeth and her sister Maria E. is hanging at Locust Lawn, in New Paltz, NY. Elizabeth is the daughter of Josiah Dubois and Sarah Decker. Josiah is known as the builder of Locust Lawn. He was born in the Jean Hasbrouck house on Huguenot Street in New Paltz. Elizabeth died in 1815 at the age of 30.

"Sarah Maria DuBois and Maria Eliza Hasbrouck (see above), each woman is seated in a green paint-decorated windsor side chair and rests an arm on a Federal server that has mahogany crossbanding and a ring drawer pull with a floral backplate." A brilliant format Ammi Phillips's Women in White, By Joan R. Brownstein and Bobbi Terkowitz 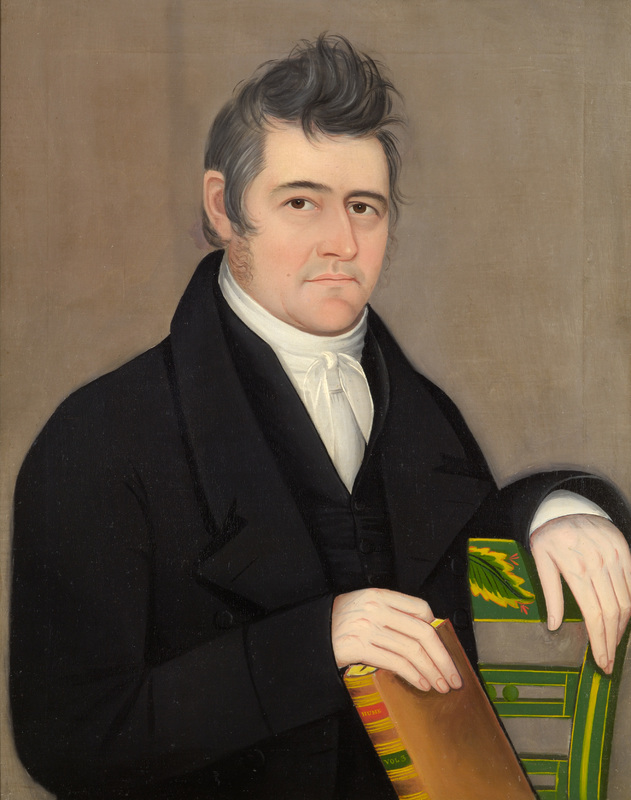 Philip Hasbrouck was born October 22, 1783 in Guilford, Ulster Co., NY. The hamlet of Guilford would eventually be known as Gardner. Philip was the fourth son of Joseph (1744-1808) and Elizabeth Bevier (1749-1795). On January 30th 1810, he married Esther Bevier (his first cousin). During the first year of his marriage, he built his home on the road now named after him, Philies Bridge Road. He died unexpectantly on December 17, 1841 in New Paltz, now Gardner,  Ulster Co., NY.