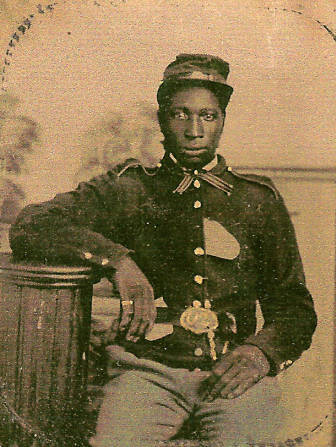 Born c. 1832, Richard Oliver signed the enrollment for military duty in New Paltz, New York. At the time he was a married man and his profession was a Laborer. He had a wife named Anah, age 38 and also two children; Marget F. age 10 and James H. age 8 (according to 1865 Census). He enlisted in Kingston, New York on December 26th, 1863 for the 20th Colored Infantry which was sent to the Gulf war zone. He fought at the battle of Port Hudson and also went to Texas, Florida and Tennessee. Richard Oliver along with his unit on October 7th, 1865 was mustered out and sent home.

While on his return home from war, Richard Oliver became ill. He died on October 25th, 1865 while on the Steamship Northern Light. It left from New Orleans and was destined for New York City. Richard Oliver was unable to make it home to see his wife and kids after surviving combat for over a year. His wife had issues receiving his pension on the fact that he was officially mustered out but not officially discharged. Also the proof of marriage to gain his benefits seems to have been an issue as well. Claiming to have been married at her father’s house in January 1854 she was the sole surviving witness to the event. After a long battle lasting over a year she was eventually able to get his pension in order to support herself and her two teenage children.