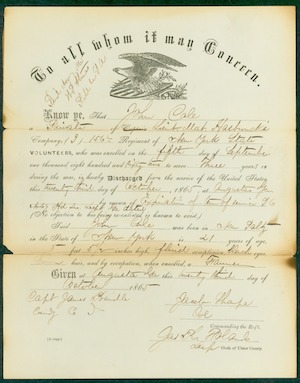 Soldiers and officers in the United States military during the Civil War could be discharged from military service for a variety of different reasons. Some causes for discharges include a severe injury or disease, an officer's resignation, the mustering out of a unit, or the war coming to an end.

Twenty-one-year-old Civil War soldier, Private John Cole of New Paltz, was discharged on October 23, 1865 after serving a three-year-term of service in the 156th New York State Volunteers. John was a young farmer living in the town of Rochester, Ulster County when he enlisted.