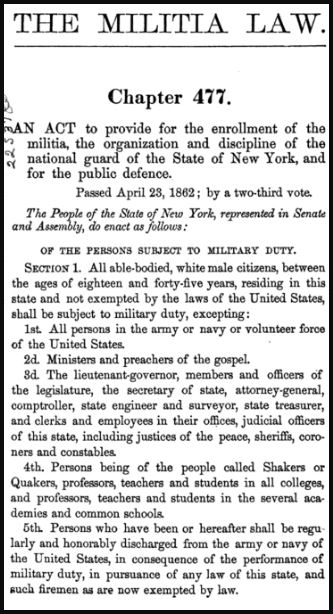 The New York State Militia Law was originally passed in April of 1862 and was amended on May 5th, 1863, two months after the national Enrollment Act was ratified. This Militia Law provides legislation on who was exempt from military duty as well as instructions on how to carry out the enrollment of eligible men subject to military duty.

The 1863 amendment reduced the amount of exemptions that were originally listed in the 1862 law. Ministers, preachers, state legislators including sheriffs as well as constables, firemen, Quakers, professors, teachers and students in all colleges as well as teachers and students in some academies and common schools were all exempted in the original law of 1862. All of these men were later eligible due to the amendment of 1863 when the United States becomes desperate for reinforcements.

The amended 1863 state law left the following to be exempt:

The amended law also mentioned specifically that any person drafted, “who may be a  member of any religious denomination whatever, as from scruples of conscience” could be excused from the draft if they paid the $300 commutation fee to the county clerk.

Enrollment Process and Duties of the Enrollment Officer:

The New York law called for every person liable to military duty (able-bodied white males who were citizens and ages eighteen to forty-five years) to be enrolled by an enrolling officer. The enrollment officer used the town’s assessment roles to help make the list. Four copies of enrollment were made, one was kept by the officer that did the enrollment, one was sent to the town clerk, another to the county clerk, and finally one was to be sent to the adjutant-general’s office. The enrollment officer could also visit any place of residence and inquire about the names and information of people living there. If someone refused to comply with giving the officer information or gave the officer fake information, that person would have to pay ten dollars for each piece of information that they refused to tell or lied about. After making the enrollment, the enrollment officer was to deliver a notice to each person letting him know that they were enrolled and liable for military duty. If that person claimed to be exempt, they would have “on or before the fifteenth day of August then next ensuing, file a written statement of such exemption, verified by affidavit, in the office of the town or city clerk.” The enrolling officer was to then write the word “exempt” next to the name of each person claiming exemption. If that person lied about why they were exempt, they were guilty of perjury.