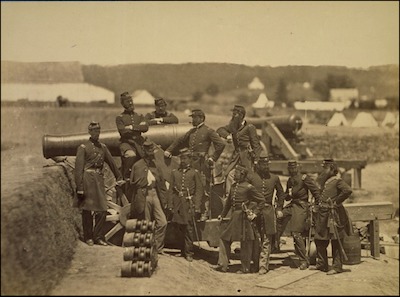 The First Regiment of the Irish Brigade was mustered in November 17th, 1861. It was the First Regiment out of five within the Irish Brigade. The 69th New York Irish Legion (also known as Corcoran's Brigade) contained men from New York City, Brooklyn, Buffalo, Chicago and the surrounding areas. Three Irish men from the 1863 enrollment book from New Paltz volunteered for this unit. These men were Patrick Hughes, Patrick Mulligan and Edward Mulligan. It was mustered in for three years and stationed at Fort Corcoran near Washington. Under control of General McClellan, their first engagement was at Rappahannock Station in Virginia. The brigade fought at Yorktown, Fair Oaks and the Seven Days’ Battles. During the Seven Days Battle, the 69th was in constant combat and suffered a total of 208 casualties. Arriving too late at the Second Battle of Bull Run, the unit was in the midst of “Bloody Lane” during the Battle of Antietam costing 196 casualties. The regiment fought at Fredericksburg, Chancellorsville and Gettysburg. Losses became so heavy that two companies had to be combined into one. With so many casualties, more Irish were required to join the Brigade. When the draft was enacted in 1863, many Irish immigrants could not afford the three hundred dollars to opt-out. Many families felt they were discriminated against and refused to replenish the depleted units. Families felt that the Irish Units were being taken advantage of and only considered cannon fodder. This led many to riot during the 1863 riots in New York City. Many Irish were sympathetic to keeping the Union together but not to ending slavery. Many men within the Unit re-enlisted after three years allowing the company to remain a veteran organization. In June 1864, the Irish Brigade was disbanded but the Fighting 69th stayed in the fight. The Irish Legion suffered heavy losses at the first battle of Petersburg and eventually were mustered out at Alexandria on June 30th, 1865. Of all the New York units, the fighting 69th took the most casualties, placing sixth in total loss among all regiments in the Union. Over 1,500 men enlisted in the unit during the Civil War.

Men from the Irish Brigade noted in the Civil War Enrollment Book: