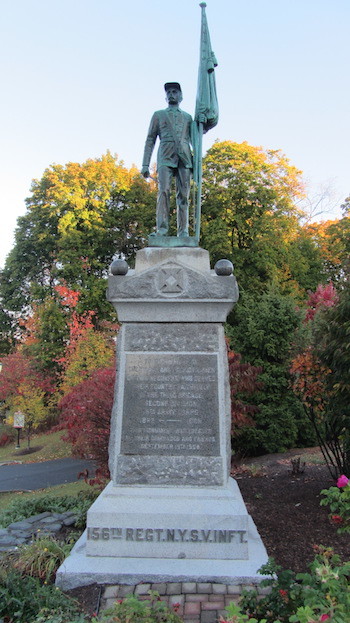 The only Monument dedicated to the 156th New York State Volunteers Infantry Regiment is located at the intersection of Route 9W and Milton Avenue in the town of Lloyd located in Highland, NY. The statue of the soldier standing at attention was erected on September 19,1908. On the same day, a dedication ceremony took place where about 3,000 people attended.

The inscription on the monument reads:

To the Memory of the brave and patriotic men of this regiment who served their country faithfully in the third brigade, second division, 19th Army Corps. 1862-1865. This monument was erected by their comrades and friends September 19, 1908. 156th Regiment, New York State Volunteer Infantry.

Written on the base of the other three sides are the regiment’s most prominent battles: Port Hudson, Winchester, and Cedar Creek. 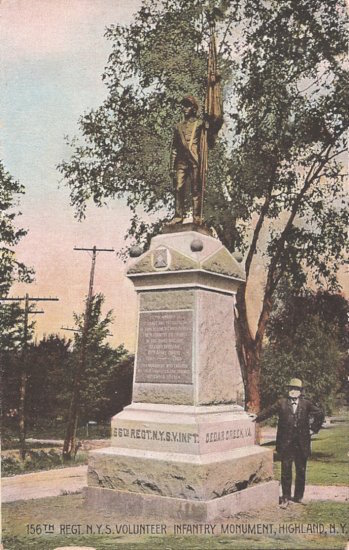 The monument came to fruition with the help of a Civil War Veteran named Aaron Rhodes as well as Edmund Paltridge, a Civil War Veteran of the 156th and commander of the Highland Post, Grand Army of the Republic. Paltridge was credited with coming up with the idea of the monument and was essential in raising funds for it. Although Rhodes fought in the 20th N.Y. Militia, he was very active in veteran affairs and donated a piece of his land for the monument to be placed. Rhodes house on the property was demolished in the early 2000’s when 9W was widened.

Illustration credit of image of monument -  Original postcard is from the collection of Vivian Yess Wadlin. Permission was granted to HRVI to create and make available the digital version.